Democrats: The Party of Psychological Disorders

RUSH: Anybody ever heard the name Christine…? What’s her name? Christine Fair? Dr. Carol Christine Fair? Anybody heard of her? Let me tell you who she is. She is an associate professor in the security studies program at Georgetown. Georgetown’s not an insignificant university. Georgetown is the… In fact, Georgetown University was the nucleus, the center of the movement to give women as much contraceptive help as possible, birth control pills as far as the eye could see. Georgetown was the center in that movement. And this babe… Well, speaking loosely here. This woman, Dr. Carol Christine Fair, is an associate professor in the Security Studies Program. I don’t know what securities studies is.

You would think that it’s like national security, but it could be home security. I don’t know what it is. Women’s studies, deep-diving studies, any number of other studies. Well, Dr. Carol Christine Fair, an associate professor in the Security Studies Program at Georgetown, said white GOP Senators deserve to die miserable deaths ‘while feminists laugh as they take their last gasps.’ She went on a profanity-laced tirade against Kavanaugh, calling him a ‘rapist’ and ‘perjurer.’ This is a professor at Georgetown. She described the Republican Party as an ‘f—ing death cult’ and ‘filthy swine.’ 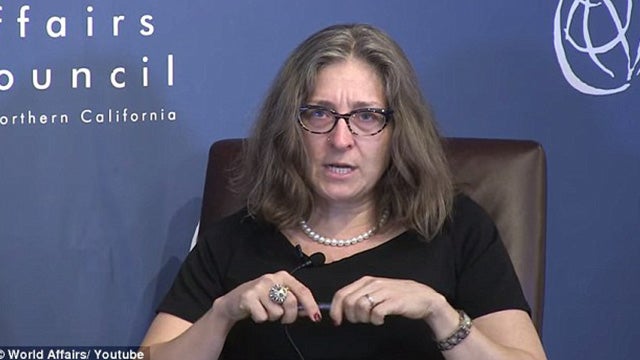 Is there any embarrassment over Dr. Christine? No. But I’m telling you this is why I have ascribed the theory that what liberalism and the American left has become is essentially a party of psychological disorders infiltrating our political system and demanding that their psychological disorders be treated as serious policy disagreements and that they be given policies they demand. We’re dealing with people that have psychological disorders who’ve become the base of the Democrat Party.

All of them are victims. It’s somebody else’s fault. “Dr. Fair said this in response to Senator Lindsey Graham blasting Democrats for the biggest political sham he’s ever seen.” After this tweet, she is still employed at Georgetown, where probably she was applauded by several others there who share other psychological disorders. Now, Twitter has removed her account after she tweeted that white men should be castrated and fed to pigs. But she is still at Georgetown. And she probably will be back on Twitter after a limited amount of time.

Folks, if you are a woman and if you are the mother of sons, and, if, in this climate, you vote for any Democrats, you need to really think about that, because you are more than likely voting to put your sons in lifelong political peril. If you’re married to a man in any job or income bracket and you vote for any Democrat, you are living on borrowed time. Your whole life can blow up at any second. The Democrat Party, the American left can come along at any time and take out your man, if they need to.

If you have brothers and vote for any Democrat, you are sentencing your brothers to blindsiding potential ruination. Even your father in his 70s or 80s is not immune to having his life wiped out of the existence with one Drive-By news story. If you have any treasured men in your life, a high school or college friend, a mentor, a neighbor, a business partner, a pastor, a boss, a coach. If you have any men in your life that you love, respect, and like, and you vote for any Democrat, you are putting them all at risk.

They are one Drive-By Media story or one moment of attention away from potential destruction, one accusation, regardless how uncorroborated or ridiculous it may be. I know that there are angry women like Christine Fair out there, and I know that there are angry women like Dr. Ford and others. But they are not the sample size of American women. If you’re a standard-issue, ordinary, normal, loving female living in America and you vote for any Democrat, you really need to stop and think about it.