Here’s Why I Led with NAFTA Yesterday

RUSH: I was just made aware of an audio sound bite that happened on PMSNBC this morning. Bill Burton, who is the former deputy Obama White House press secretary, was talking about me and Kavanaugh. They were monitoring this program. Doesn’t surprise me a bit that the Obama people are still monitoring this program. And I’m just gonna tell you. I’m not surprised. I did not predict this, but I wondered if somebody was going to notice what I did yesterday. Here’s Craig Melvin, the host, setting up Burton with the question.

MELVIN: Let me ask you really quickly here, Mr. Burton, about this Washington Post article yesterday. The right has come alive with impassioned defenses of Kavanaugh in recent days. Talk show host Rush Limbaugh unleashed a torrent of criticism on the air such as his riff last week on militant feminism. “These women are angry,” Limbaugh said. “Something has happened to them in their lives, and their rage and anger, they take it out now on the country or on all men or men in “the powerful majority,” which is white Christian men and so forth.” Again, that’s a quote from Rush Limbaugh. Thoughts?

BURTON: Look, I listened to some Rush Limbaugh yesterday and what I noticed about his show that he actually started with half an hour about trade before getting into the Kavanaugh stuff. And it made me feel like maybe some of the energy was gone. 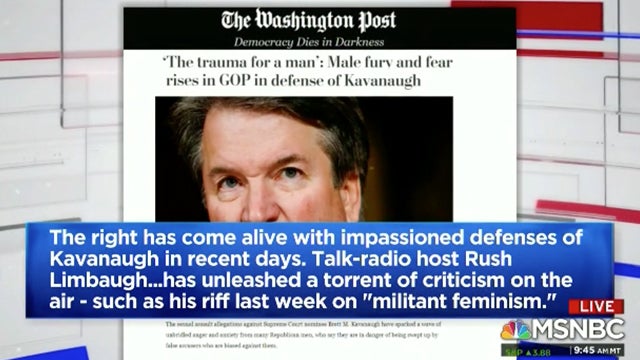 RUSH: I am so happy somebody noticed that. Now, if you were listening yesterday, you know why I did it. Because I told you why I did it. I told you why I opened with NAFTA. And I’ll repeat myself again. We started out by pointing out Trump had done a 30- to 45-minute ceremony announcing NAFTA in the Rose Garden, and he had all the people that had helped make it happen there, and I pointed out that this is something that the press is gonna…

They’re there in attendance, but all they want to ask Trump about is Kavanaugh. They’re not asking about NAFTA. They’re gonna look past it because to them it isn’t any big deal. It’s trade. Big whoop. They’re missing it again. This is a seminal Trump campaign issue! Something that he promised, something that he committed to doing and came through and did it! He got rid of NAFTA! And I knew that if I didn’t open the program talking about it, we wouldn’t talk about it because it would be swept away by the Kavanaugh stuff.

So I, as I told you yesterday, opened with it to make sure that we discussed it here and to make sure you in this audience heard the discussion and realize the importance of it. Because it’s relevant! When you start talking about election turnout in November, when you again remind people that Donald Trump happens to be the rare politician that actually keeps promises, makes them and does his best to keep them. And this is a huge one! I knew the media was gonna look past it. The media was gonna think that Trump’s probably using it to distract people from Kavanaugh because of how badly Kavanaugh’s going in their minds.

That’s not at all what was going on. Trump was singing his own praises because he should have been. It’s a huge achievement. Let me tell you something else about this. Since Mr. Burton has availed me the opportunity to talk about this again, nobody is talking about this, but I’m here to tell you that gutting NAFTA, when you go inside the Beltway, when you get into the heart of the swamp, when you get into the bowels of the Washington establishment, gutting NAFTA is killing them! NAFTA. 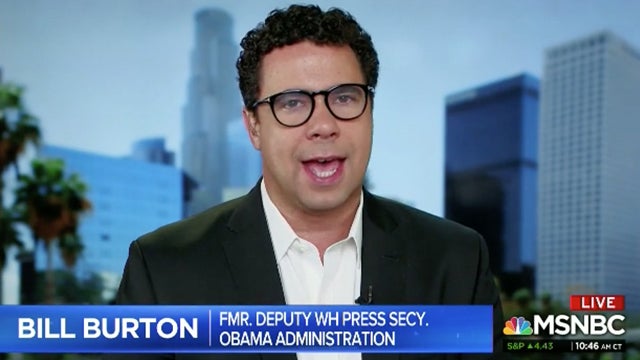 If you go back to 1991 and ’92 when NAFTA was put together, the entirety of the Washington establishment… I mean, intelligence, foreign policy, State Department, Commerce Department, marketing department, everybody was in on it. It was a huge deal. It mattered to the swamp because it was one of the first early steps toward establishing the concept of globalism. It wasn’t a direct assault on sovereignty of the United States, but it took us down that road. It established international tribunals to which the United States would be subordinate to, such as the World Trade Organization.

And the Washington establishment, the exact people Trump ran against, the exact people Trump defeated, NAFTA was their baby. They conceived it. They birthed it. They raised it. They stood by it. They loved it. And it’s gone. It took them years to get NAFTA written. It took them months to get it passed. P-a-s-s-e-d. As I say, it was a serious and important step toward globalism and subordinating the United States to world tribunals, like the World Trade Organization and the International Criminal Court and this kind of thing.

It was not making America great again, and it was not putting America first. NAFTA and deals like it are kinds of things that establishment types see as their purpose and their expertise. This kind of thing, these kinds of trade deals and promoting globalism and a gigantic world structure, a world order that McCain often spoke about, this is why they are there. And it’s gone. Well, I’m telling you foreign policy wonks… It did not getting any coverage ’cause Kavanaugh is dwarfing everything, but I’m here to tell you that all of these invisible swamp dwellers who live and die by such things as NAFTA are beside themselves that Trump got this done.

It is a huge middle finger to them. Now, to Bill Burton it’s just trade. (Impression) “Ah, Limbaugh on his show talking about trade was not Kavanaugh because Kavanaugh’s not inspiring anybody.” How can anybody listen to this program and think that? Creating NAFTA took these people years. Trump guts it, he replaces it in months, and to add insult to injury, the Mexicans and the Canadians want to be part of it! They asked to be part of it! Their noses are not out of joint. They’re not crying and moaning about the loss of NAFTA.

They want in on this new Trump deal. And that is also profoundly insulting to the swamp dwellers. They can’t see straight! This is just more hatred for Trump! This is just… It’s blinding them. And now there’s a companion story (I didn’t have a chance to get to it yesterday) that the ChiComs are getting ready to lower their trade barriers on U.S. exports because of Trump’s tariffs! It’s all working! This is something these guys never even tried to do!

To straighten out the trade imbalance with the ChiComs? The swamp dwellers never even tried to do that. That was just another circumstance we had to accept in the modern world. And watch what’s gonna happen next. I’ll tell you right here and now, Iran is gonna come to the table. You watch when that happens. This is all falling into place for Trump, exactly as he said, exactly as he is making happen.

I don’t know how many of you do wire transfers, but there’s a form of wire transfer called SWIFT. And if Europe goes ahead and puts in a replacement for SWIFT, Trump is liable to freeze the Iranians out of using it, meaning they’ll have trouble moving their money around. That’s why I brought it up because it is such a huge deal in so many ways. It’s a huge deal in turning the swamp upside down and inside out, and it is a huge deal for Trump, making America great again, putting America first, and following through on a deeply, deeply committed and highly touted campaign promise. Trade deals were among Trump’s top three campaign issues.

It’s not an accident that 90,000 tried to get in to see Trump at Johnson City, Tennessee, after the NAFTA deal was done. The people in Washington, the Drive-By Media are totally missing this. It’s not sexy to them. It’s not a big deal. NAFTA, trade deal, yeah. Screw Trump for doing it. But they don’t have any ability to see its connection and its relevance and its importance in Trump supporters remaining revved up and loyal.

RUSH: By the way, Trump is gonna actually go up to the Senate and get them to ratify NAFTA rather than “deem” it to have been passed. That’s a trick Obama played when he couldn’t get Senate ratification. He would just deem it to have been passed and then implement it. It’s one of the tricks he played with, I think, the Iranian nuclear deal. It’s one of the reasons Trump was able to unwind that. There was the Corker loophole, everything else. But Trump’s gonna actually go up there and get this thing ratified, this new NAFTA deal. This is the United States-Mexico-Canada trade agreement or some such thing.

RUSH: Here’s Trump. We’ve got time to get this. Grab sound bite No. 28. This afternoon Trump at the White House line talking about the new NAFTA replacement agreement, the USMCA trade agreement…

THE PRESIDENT: The deal we made with Canada and Mexico has gotten tremendous reviews, as you see. It’s been very well received by farmers and ranchers and industrialists and workers generally, and it’s been really something. But it’s gotten tremendous reviews, and even many of the Democrats — including Chuck Schumer — came out and said nice things. It’s nice to see a little bit of a bipartisan approach. But the big trade deal, the largest deal ever made so far in trade, I expect to top it with China or EU or something. As you know now, we’re working on China, we’re working on Japan, we’re working on EU. But these are great deals for our nation and great deals for our workers. I think the Democrats are gonna like the trade deal. They already do. A lot of them have come out and said very positive things about it. We seem to have great support for the trade bill. It covers just about everybody.

RUSH: Yeah, well, a bunch of swamp dwellers are not happy. Their life’s work went up in smoke when NAFTA died.