DNC Met with FBI Prior to Carter Page FISA Warrant

RUSH: This is a story from John Solomon. “Collusion Bombshell: [Democrat National Committee] Lawyers Met with FBI on Russia Allegations Before Surveillance Warrant” on Carter Page! “Congressional investigators have confirmed that a top FBI official met with Democratic Party lawyers to talk about allegations of Donald Trump-Russia collusion weeks before the 2016 election, and before the bureau secured [the famous FISA] search warrant targeting Trump’s campaign. 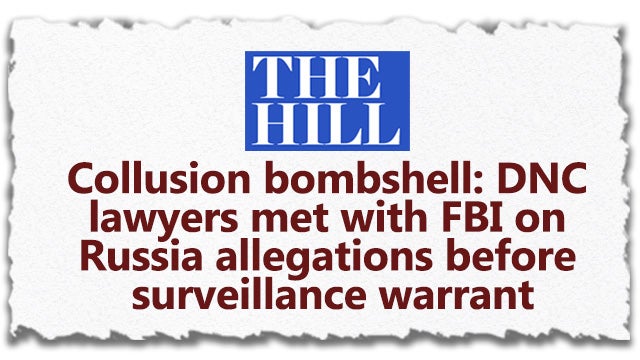 “Former FBI general counsel James Baker met during the 2016 season with at least one attorney from Perkins Coie, the Democratic National Committee’s private law firm.” This is the firm that provided the “cutout” to pay Christopher Steele for the Steele-Trump dossier. So now we’ve got confirmation that the Democrat National Committee lawyers were in on the smear of Trump by talking with FBI officials as they hatched their plan to go get a FISA warrant to surveil Carter Page, and thus…

I mean, surveilling Carter Page means surveilling the Trump campaign. Catherine Herridge of Fox News has confirmed it. She’s reporting that “sources familiar with Congressional investigation tell Fox that a lawyer for DNC/Clinton campaign was the previously unknown source providing evidence to the FBI Russia probe in ‘16,” James Baker at the FBI, a lawyer at Perkins Coie.

When this news starts to appear — and then we got the mayor of New York, Bill de Blasio (paraphrased), “We’re gonna turn over every rock! We’re gonna turn over every rock to find any dollar that Trump owes the city of New York that he hasn’t paid.” By the way, has anybody heard, has James Comey come out and praised the FBI investigation here that taken place in the last six days? Has anybody heard anything about that? Still nothing from Comey praising the great work of the FBI? Is that right?