Grassley and the Turtle Fired Up Like We’ve Never Seen

RUSH: I mentioned Senator Grassley, the chairman of the Judiciary Committee. He has… I’ve never seen him this animated. I’ve never seen the Turtle this animated. This week, the Turtle and Grassley have been fit to be tied. Grassley still is. Grassley sent a letter late last night. Grassley sent his letter at 4 a.m. today to… I guess he sent it to Schumer, he might have sent it to Feinstein, and in this letter he calls out Mazie Hirono, the senator from Hawaii, and Feinstein by name. Let me read just a portion of Grassley’s letter. 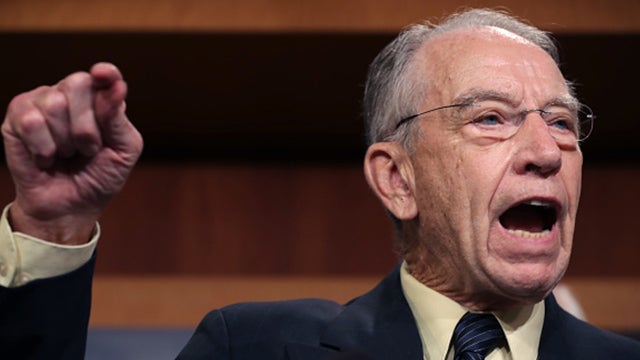 This is the polygraph he’s talking about, the notes with the polygraph, and the therapist notes. Feinstein and the Democrats have not produced those, even though Blasey Ford admitted that she took a lie detector — well, her lawyers did — and that she had seen a therapist. And Grassley’s been asking for that evidence, and Feinstein and the Democrats have not produced it. He’s saying, “You have repeatedly refused to produce this, and in doing so, you’re preventing the Senate from considering the evidence most crucial to Dr. Ford’s allegations.”

She passed a lie detector? We want to see it!

They won’t let him see it.

“I don’t know what other inference we should draw from your refusal but that the withheld evidence does not support [her] allegations in quite the way you have claimed.” It’s a reasonable thing to say. They’re out there saying she took a lie detector, that she passed a lie detector, that she told all these details to her therapist. Well, let’s see that stuff! And they won’t produce it!

Grassley’s saying: You must have something to hide.

Then, he writes, “I urge you once again, now for the third time in writing, to turn over the therapy notes, polygraph materials, and communications with the Washington Post that Dr. Ford has relied upon as evidence. In addition to the evidence I requested in my October 2 letter, in light of recently uncovered information, please turn over records and descriptions of direct or indirect communication between Dr. Ford or her representatives and any of the following:

“(1) U.S. senators or their staffs, particularly the offices of Senators Feinstein and Hirono… (2)the alleged witnesses identified by Dr. Ford (Leland Keyser, Mark Judge, Patrick ‘P. J.’ Smythe); and (3) Debbie Ramirez, Julie Swetnick, or their representatives.” What Grassley’s getting at here is: How much consultation have you had with this witness? Senator Feinstein, Senator Hirono, how much time have you spent with this witness discussing her testimony or coaching her or whatever?

I mean, he’s loaded for bear. This is the kind of collegiality violation — and I shouldn’t call it that. This is the kind of decorum that you don’t see broken. Senators don’t challenge each other. They don’t call each other out. It’s almost… It’s Senate rules. And Grassley yesterday during a joint Republican press conference…

He kept running back to the microphone to rip into these media people as using bias and so forth. In fact, grab audio sound bite No. 5. This was… I don’t know if this was at a press conference or not. It may be exactly what I saw, but it is an example of Grassley with his finger on the pulse here. This is… Nah, it’s not what I’ve seen. This is this morning in Washington. But let’s listen to it.

GRASSLEY: What we have learned is the “resistance” that has existed since the day after the November 2016 election is centered right here on Capitol Hill. They have encouraged mob rule! When you hear things about “get in their face,” bother people at every restaurant where you can find a cabinet member? These are coming from public servants! They ought to set an example of civility in American society, and it’s been made worse by what has happened to Judge Kavanaugh. I hope we can say “no” to mob rule by voting to confirm Judge Kavanaugh. I yield the floor.

RUSH: That was during his Senate floor remarks today in favor of Kavanaugh. He was singling out, by the way, Maxine Waters for promoting this, as he called it, “resistance.” But he’s calling them out here and chastising them for encouraging mob rule and that the “resistance” leadership is actually right here on Capitol Hill! And he’s right! The leadership of the resistance is the Democrat Party. The resistance is over at the Democrat National Committee and in various Senate offices and offices of Congress — members of the House and so forth.