RUSH: And here we go, folks. Right on cue, right on schedule, the headline: “Christine Blasey Ford Nominated for Distinguished Alumna Award at Alma Mater.” It’s from TheHill.com. “Christine Blasey Ford, the college professor who accused Supreme Court Justice Brett Kavanaugh of sexual assault” with no evidence and no corroborating witnesses “while they were in high school, has been nominated for a Distinguished Alumna award at her alma mater.

“Ford was nominated for the award by a professor at University of North Carolina-Chapel Hill, where she earned an undergraduate degree in experimental psychology” and beating lie-detector tests “in 1988. In a letter obtained by The Hill, Jennifer Ho, a professor in the university’s Department of English and Comparative Literature, said Ford did ‘something that was extraordinary’ earlier this year when ‘she told the truth about a sexual assault'” with no evidence and no corroborating witnesses “‘when she was fifteen years old at the hands of Judge Brett Kavanaugh.'”

This is what they do, folks.

This is just the first of many. She’s gonna get book deals offered to her. There are gonna be TV movies and HBO feature movies. Then there will be documentaries. Then there will be probably one of those Netflix Making of a Murderer-type series to explain how Kavanaugh beat back her charges and scarred and ruined her for the rest of her life and all of that. We’re just seeing the beginning here of the rehabilitation of Blasey Ford, and it starts with Professor Ho rehabbing Blasey, at the University of North Carolina at Chapel Hill.

Ho writes, “We live in a society that does not believe women. The many indignities that women experience in their day-to-day lives is proof of this, as is the continued attacks on Dr. Blasey Ford after her testimony” that had no evidence and corroborating witnesses. “We know that people who are survivors of sexual assault” that did not happen “do not experience justice for their trauma; we know that many of them choose not to report to the police and choose not to reveal their assault,” because they, too, have no evidence or corroborating witnesses and thus “fear that they will not be believed.'”

Speaking of which, grab audio sound bite No. 13. Sally Quinn. She is the widow of the lawsuit editor of the Washington Post, Ben Bradlee. Sally Quinn used to be a journalist at the Washington Post CBS, the CBS in the morning show. She’s probably best known for throwing Washington’s best dinner parties during Democrat presidencies. During Republican presidencies, nobody wanted to go to dinner ’cause they were so mad all the time.

But she apparently had the best dinner parties at her and Bradlee’s house, and she was on Anderson Cooper 29 last night. Now, Sally Quinn alleges that former Texas senator John Tower… That’s how his name was pronounced: Tow-ah. His name was John Tower. He was a short little guy, five four, pockmarked face, acne, greasy hair, and this guy was apparently Don Juan running around the Senate just bedding everybody that got in his way.

This guy’s had more allegations… I mean, literally! I remember one of these allegations, all kinds of senators came forward to defend him while telling him he needed to resign. One of them was, uh… (snapping fingers) Sam Nunn of Georgia. I’ll never forget his attempt saving the reputation of John Tower. I knew John Tower. I think John Tower actually was forced to resign because of one of these things, wasn’t he? But I’m not kidding. I mean, this guy was a swordsman, folks, by reputation. Koko, get a picture of the guy and put him on RushLimbaugh.com. I’ll try to find one here and show you on the Dittocam. I mean, we’re not talking about George Clooney here. Well, anyway, Sally Quinn says that John Tower once assaulted her but that she didn’t come forward. And here’s what she says. Anderson Cooper says, “Look, in your memoir, you talk to an experience where a sitting senator, John Tower, basically tried to sexually assault you in the back of a taxi.”

Folks, John Tower would never be in a taxi.

That would be such a demeaning accuse car to be in. You’re a senator! You don’t drive around in Yellow Cab cabs. You have a car service, a limo, a driver. Anyway, she asserts it happened in a cab. “… that John Tower tried to sexually assault you in the back of a taxi. You didn’t come forward then, and you didn’t come forward when the senator was nominated for secretary…” That’s what it was! They nominated the guy for secretary of defense, and that’s when all this came out.

But Sally Quinn didn’t, and Anderson Cooper wants to know why she didn’t say anything.

QUINN: He dragged me over to this night club and ordered brandy and wouldn’t let go of me. And finally I got away and ran out and got in a cab, and he came out and jumped in the cab and jumped on top of me and basically tried to assault me. And the poor cabdriver was desperate, ’cause I was screaming and pounding at him. “Senator, stop.” And I was living at Fort Myer, Virginia, where my father was stationed.

He was a general in the Army at the time. And the cabdriver was going about 90 miles an hour because he realized what was happening in the back of the car. He sort of screeched to a halt in front of our quarters, and I think then Tower got scared because he thought maybe the general would come out with a shotgun. But I went in the house that night; I cried all night long. I was absolutely traumatized. I never told my parents or Barry until much later, several years later, because I was so ashamed and so guilty. 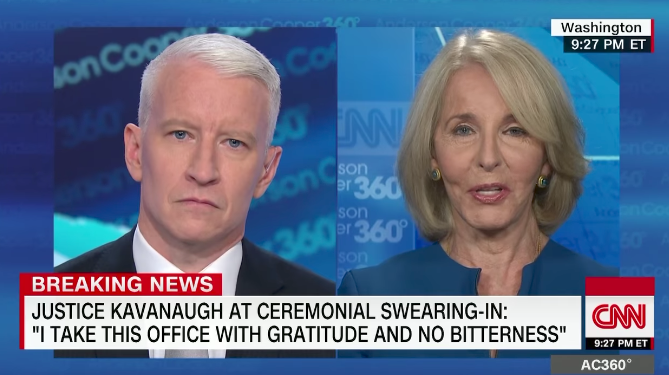 RUSH: So Sally Quinn assaulted by John Tower. But, you know, she… Is there another one here? Yeah. There’s one more bite we got time to squeeze in. Here another reason why. No. 14. Three.

QUINN: When I think about it, I thought, “I’m so glad I didn’t do it, because I could have been Anita Hill,” and Anita Hill’s life has been completely ruined, destroyed.

QUINN: She’s always gonna be the person who was in that hearing having to talk about these disgusting things. Christine Blasey Ford’s name came out against her will. She didn’t want to be there. What I think is that if I had been Anita Hill and I’d known better, I wouldn’t have done it. If I’d been Christine Blasey Ford, she didn’t expect it to go public, but I would have not done it.

RUSH: Because their lives have been ruined. Christine Blasey Ford just got an alumna award from UNC Chapel Hill for this, and she gonna get movies and… Anita Hill’s life has not been ruined or destroyed, Sally! What world are you looking at? (sigh) Anyway, I… Why did Blasey send the letter if she didn’t want any of this to come out? This doesn’t make sense.