Michael Is Not a Historically Large Storm, But It’s Intense

RUSH: I’m getting quite a few emails today from scientists and people involved in meteorology saying, “Rush, don’t let ’em get away with this! Don’t let ’em… Rush, it isn’t that big a storm by historical norms. It’s a relatively small storm,” meaning the size. It’s powerful. It’s a category… Well, they say it’s a Category 5 now. Definitely Category 4. They’re saying 155-mile-an-hour sustained, 175-mile-an-hour gusts. But these meteorology people are saying, “Don’t fall for this once-in-a-lifetime or worst-case scenario. It’s not.” 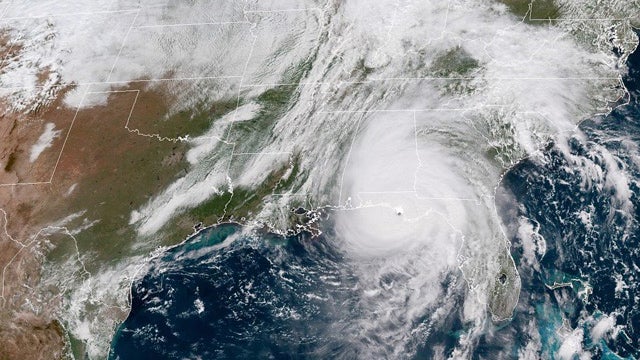 The most recent one, I have a picture. The guy sent me a picture, color satellite photo of the… In fact, you know what I ought to do? I didn’t have time. I’m gonna take a screenshot of this and I’m gonna put it in the Dittocam switcher. I’ll do that in just a second during the break or maybe during a sound bite so that you can see what I’m talking about. It’s a picture of this storm and compared to the Gulf of Mexico and the state of Florida, it isn’t that big.

You just heard Trump say in the audio we played of his meeting with FEMA, “Man, this thing’s big, right? It’s bigger than ever, right? Bigger than the whole Gulf of Mexico.” “Well, it’s pretty big out there, Mr. President.” It isn’t! In fact, this email says, “Rush, Hurricane Allen in 1980 covered two-thirds of the Gulf. This isn’t even close to that.” You know, I’m happy to see this meteorological sensitivity to the exaggerations that are taking place in the media. 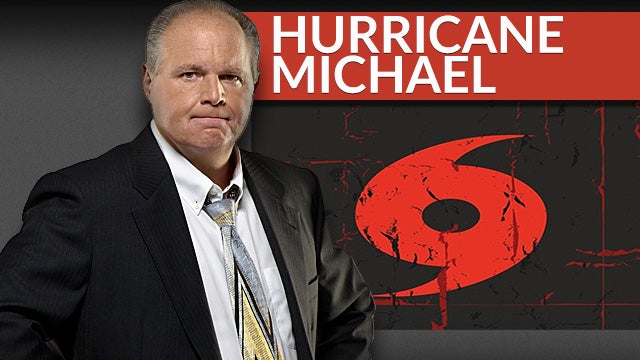 ‘Cause what these guys all know is that this is being used to advance the whole politics-of-climate change agenda and everything. Now, in saying this I don’t want anybody to misunderstand. I’m not saying this storm’s not a bad one and I’m not saying it’s not destructive and dangerous. It just isn’t what they’re portraying it as.

Worst-case scenario, it isn’t. All things considered, the entire geographic area of the storm is relatively small, which you will see. And this picture of it, by the way, doesn’t have any color on it. It’s a satellite of the clouds. There are no gradients. There are no deep, scary bright reds and dark blacks and all that in this. Hang on and I will get a shot of this in the Dittocam.

RUSH: Here’s the picture. Let’s switch to it. I got it in the switcher, the Dittocam now. This is, if you’re watching on the Dittocam, and I’ll get this up to Koko so we have it at the website as well. That is a satellite photo from GOES-16, I believe, the weather satellite, of Hurricane Michael. And you can see that it is in terms of it is total area, it’s not a large storm. It’s intense as it can be. It’s a Category 5. But it does not… There was a meteorologist sent me a note a moment ago, 1980 there was a hurricane named Allen that covered two-thirds of the Gulf of Mexico.

And, again, the sensitivity here is due to the fact the media is hyping this, and even the weather service is hyping it because there’s, of course, a political agenda attached. The climate change and all that. So I just wanted to share with you a sat photo that was sent to me to show that it’s an intense storm, but it’s not, even by historical standards, among the largest. And remember, the real intensity of those storms is at the eye and then it begins to dissipate. But a Cat 5 it’s gonna take quite a while for dissipation to become no damage, just heavy rain and wind.