Don’t Be Distracted by the Drive-By Midterm Poll Push

RUSH: I mentioned at the very beginning of the program that the Drive-Bys were doing everything they can — they are doing everything they can to convince anybody they’re reaching that the midterm elections are over. Now, they may be not so sure about the Senate, but the House, they think, is gone. It’s Democrats’, and it’s just a matter of the three weeks ahead of us playing out, getting to Election Day and making it official. The poll that I saw on CNN…

I didn’t see. It might have been theirs. I’m not sure whose poll it was. Doesn’t matter; they’re all the same. That independents are breaking for Democrats like nobody forecast, like nobody knew. Independents. And they’re interpreting this as meaning that the country has finally had it with Trump, finally fed up with Trump — and, of course, by association, the Republicans. And then that poll started focusing on health care and…

Well, I could, in any other period of the year, make the case that it’s not even insurance and it ought not be discussed in terms of health insurance because insuring people after they’re diagnosed, specifically with a terminal disease, whatever you do for ’em, it’s not insurance! But it doesn’t matter because we live in an era where health insurance means somebody else pays for it. And if you are not going to luck out and have somebody else pay for it simply because you’ve already got a disease, then you’re gonna think it’s unfair.

But it wasn’t technically insurance. And the noteworthy thing about it was how few people signed up for that pool. It was stunning to everybody, and it wasn’t as though the pool was not advertised; it was. Because it was a huge selling point for any politician pushing Obamacare or government-sponsored health care. Because covering people with, quote-unquote, “preexisting conditions” has always been something that a political party cannot afford not to do.

They have to do it, even though we’re not talking insurance. (interruption) Well, yeah, it’s welfare, but you don’t say that because it’s gonna offend people. They wouldn’t be on the receiving end of the payments if they didn’t have a health problem, and the fact that it’s preexisting… What is preexisting? It means you get the disease before you have insurance; then you get the disease and you want the insurance. In no other walk of life can you do that.

You can’t set your house on fire and then call State Farm or whoever and buy a homeowner’s policy that protects you against fire. They won’t sell it to you. You can’t have a bunch of stuff stolen from your house and then go buy theft insurance. Nobody will sell it to you. But when it comes to health care, if they don’t sell it to you, then all hell breaks loose, and they’re ripped to shreds. There’s no making money insuring people with preexisting conditions.

Which then engenders the response, “Well, that’s why it’s wrong! People profiting from other people being sick, and that just shouldn’t be. That’s what’s wrong with it. People should be given health care for nothing, and the people should provide it for nothing from the goodness of their hearts,” and that’s how it works out. And when you have a political party that promotes that kind of thinking, it’s very, very tough to compete with it. 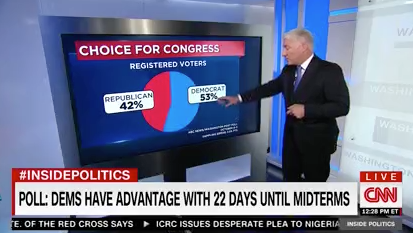 So somehow in this polling data preexisting conditions has come up, and the Democrats are once again trying to make hay on it by claiming the Republicans want to take it away. In fact, in Pennsylvania, Bob Casey… In the Senate race there, Bob Casey has run an ad claiming that the Republican candidate for the Senate wants to deny his own granddaughter medical treatment. She has cancer. She’s a single-digit age. She’s a baby!

Casey’s running an ad saying that the Republican is so anti-people that he wants his own granddaughter to not be given insurance to treat her. It’s sick, and they’ve jumped all over Casey. The Casey campaign says, “We’re not gonna pull the ad.” So the Democrats are running on preexisting conditions and the fact the Republicans again have no hearts and all the other Trump stuff. And then CNN’s poll talks about this massive wave of independents that all of a sudden, according to their poll, is seeing the light.

Well, from the McClatchy News Washington bureau. Headline: “Republicans Worry that Trump and His Aides Have no Idea the Hell that May Await.” This article by Anita Kumar uses anonymous interviews with Washington Republicans and Obama, Clinton, and Bush hangers-on. “Republicans who support President Donald Trump have grown fearful that the White House is unprepared for the onslaught that may await them in January.

“If a ‘blue wave’ succeeds in giving the Democrats control at least of the House of Representatives in the midterm elections in November, Democrats will have the power to subpoena documents and force administration officials to testify about a slew of scandals, including aides using private email for government business, agencies spending taxpayer money at Trump resorts and sexual assault allegations involving … Brett Kavanaugh.

“Five Republicans with close ties to the White House said that instead of preparing for what could be a years-long attack by a newly emboldened Democratic-run Congress, Trump aides are wasting time trying to respond to non-stop controversies, Trump tweets and the investigation into Russian interference in the 2016 election.”

This story says, “The White House should be hiring more staff to handle the congressional inquiries, advising administration officials to retain their own attorneys and researching potential areas of vulnerabilities, ranging from the death of four U.S. soldiers in Africa to the sluggish response to Hurricane Maria, according to people who worked for Presidents Bill Clinton, Bush and Barack” Hussein O.

Now, at first glance you would think that this is a story that Trump and his buddies are not aware of the shellacking they’re gonna take in three weeks, that they are blissfully unaware that they’re gonna lose the House; maybe lose the Senate. This story focuses on what’s gonna happen if that happens. To that extent, this story undersells what is going to happen if the Democrats gain control of the House.

If the Democrats gain control of the House, every investigation into the deep state and the scandal involving Hillary and her emails and the Steele dossier — the spying on the Trump administration… All of that stops; no answers will be forthcoming. No punishment to those involved; they will get away with it, and that’s just the first thing. Virtually everything Donald Trump has achieved will be rolled back. They will do their best to reinstitute tax increases. 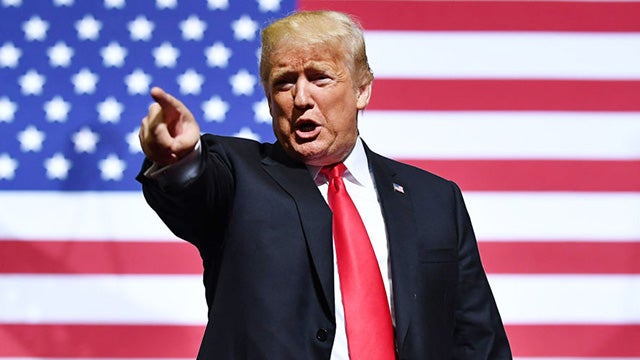 That’s gonna happen, and I can’t believe Trump and his people aren’t aware of that. I think it’s why Trump’s doing four rallies a week. I think that’s why Trump is working harder than any Republican at this moment to keep the Republicans in control of the House and the Senate! The idea Trump doesn’t get what’s in store if this happens? But specifically, aside from all those things that they’re gonna aim at Trump, the policy initiatives that have led to this great rebound and recovering economy are gonna be brought to a screeching halt, folks.

“In fact, we’ve gotta prepare by unraveling everything this man has done,” and they’re gonna portray this as a dangerous Twilight Zone two years of horror for the American people. It’s gonna be brutal.