RUSH: Grab sound bite No. 14, Nikki Haley. She went to the Al Smith Dinner in New York last night. We normally only hear about what happens at the Al Smith Dinner during presidential elections. It’s a big dinner at the Waldorf-“Hysteria,” and it is a Catholic charity organization, and it is required that presidential candidates show up at this thing. It’s always two to three weeks before the election, and they do. They show up and it’s a night of comedy, 95%, and the other 5% of the speeches get serious and political. 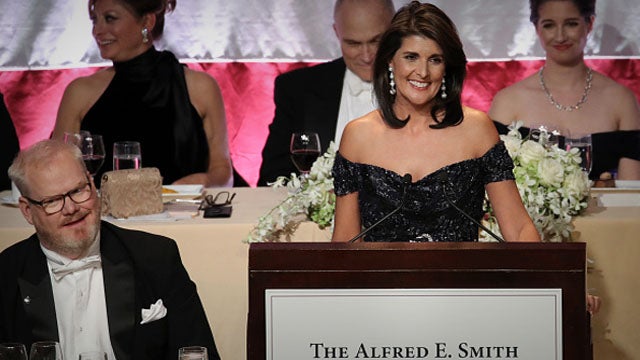 They all show up — and it’s incredible, too, that the Al Smith Dinner (at least the ones I’ve watched), whoever writes the jokes for these candidates for this dinner has got to be among the best. Every candidate… There have been some exceptions, but it seems like every candidate just has some of the best, funniest material, and I wonder, “Where do they find it?” Obviously, they are hiring joke writers, but from where, we don’t know.

Well, Nikki Haley showed up at the Al Smith Dinner last night. I mean, she didn’t storm in there. She was invited, obviously. But this is causing people to believe that Nikki Haley has got some presidential perspiration going on — and, in fact, she might. Nikki Haley said something last night. We don’t have this on tape, or in audio, but she chastised Trump last night. She said, “In America, in domestic politics, we do not call our political opponents ‘evil.'”

And, of course the room (clapping), “Yay! Yay! Yay!” (applause) “We do not call…” Well, who else does but Trump? He calls the press evil, and the Democrats evil, and so it’s that comment that made people think, “Aha! She’s actually going for it. She’s going to go for the Republican nomination at some point — maybe not 2020, 2024 — and she’s beginning the process of distancing herself as a Republican from Trump.” But her funny lines had to do with Fauxcahontas…

HALEY: So this year wanted to spice things up again, right? I get it. You wanted an Indian woman, but Elizabeth Warren failed her DNA test.

HALEY: Actually, when the president found out that I was Indian-American, he asked me if I was from the same tribe as Elizabeth Warren.

RUSH: If you do well at the Al Smith Dinner, it’s one of the tests that candidates have to pass, that they do well, then they are considered to have gotten a boost in their campaign.