RUSH: Angela Merkel in Germany has blinked. Do you remember the last — what was it, G12, G20, G90, whatever it was — where Angela Merkel announced that she was gonna buy natural gas from Putin, from Russia with a specially built pipeline? Not anymore. (shuffling paper) Right here, my friends: “In Win For Trump,” it’s the Wall Street Journal, “Merkel Changes Course on U.S. Gas Imports —

“Over breakfast this month, the chancellor told a small group of lawmakers her government had decided to co-finance the construction of a EUR500 million ($576 million) liquefied natural gas shipping terminal in northern Germany, according to people familiar with the meeting, giving a crucial nudge to a project that had failed to get off the ground for years in a country that gets most of its gas cheaply from Russia. 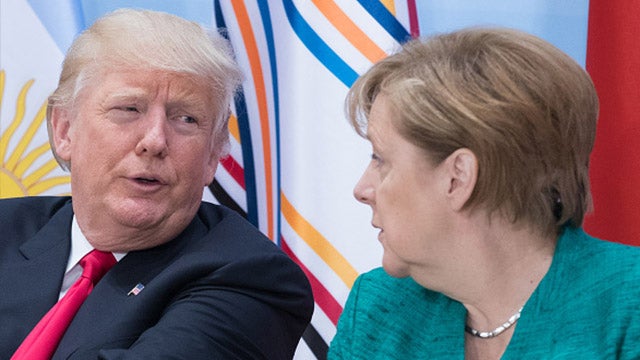 It took a while, but after all the USA spends to protect Germany from the Russians, the least they could do would be to buy some of our oil and natural gas rather than from the Russians. It was a big, big deal at that G20, whatever. Maybe the NATO meeting. Remember when Trump took her aside and took her to task for making a side deal with Russia on an exclusive natural gas line straight from Russian ports and terminals into Germany and not letting any of her NATO partners in on the deal and not using any of the material from NATO allies?

And when Trump raised hell about this, it should have sent a signal. This is not what somebody in Putin’s back pocket would do. Along those lines, Trump’s deciding to get out of these nuclear arms talks with Russia? That’s another thing that a Putin puppet would not do.