Nobody Shows Up to See Biden and Gillum

RUSH: For those of you watching on the Dittocam, I want to show you a couple pictures to make my point about the unreported story that is the number of people trying to get into every Donald Trump rally. Again, the latest news out of Texas where Trump is doing a rally for Ted Cruz, there have been a hundred thousand people seek tickets, essentially. They RSVP’d to get in. The venue holds 17 or 18,000. It originally over the weekend was 77,000 people that wanted to get in. Now that’s swollen to 100,000 people. 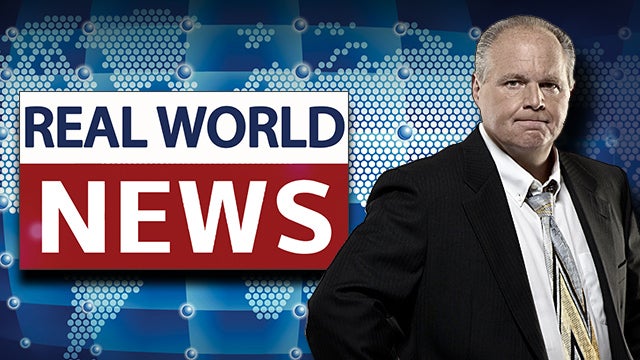 My point is: This kind of thing does not happen to political parties losing favor. It does not happen to candidates losing favor and about to be overrun by a Democrat blue wave. And just to remind you, Tom Perez on CNN today, the chairman of the DNC, said, “No, no, no, no. We always knew this election was gonna be close. We always knew!” If you know the right places to look, Drive-Bys and the Democrats are really walking this back.

Now, I know a lot of think, “Rush, don’t get sucked into this. They’re just doing a rope-a-dope. They’re trying to make you think that they’ve lost confidence, but they haven’t. This is just…” I don’t believe this, folks. These people are not rational right now. They haven’t been rational for a long time, and their irrationality really was jammed up after Trump won. But there’s a companion story to all of the people showing up for Trump, and that is, none of the people showing up for Biden.

The Democrats are sending Joe Biden out to try to draw crowds for various Democrat candidates, and it isn’t working. Now, Biden showed up to do a rally for the Democrat candidate for governor of Florida, Andrew Gillum, who, as an aside… He debated Ron DeSantis last night on CNN. This guy, Gillum, for those of you who live in Florida, I know he seems attractive to some of you in an Obama-like way. He would be the first African-American governor, is supposedly just filled with love and compassion. The guy is a full-fledged leftist Marxist and really makes no bones about it. He was talking about Florida as a collective!

That’s communist language. He was talking about Florida as “the” or “a” collective. It would be a disaster for Florida right now to elect anybody like this guy because of what he will do in wrecking a growing economy. Do you know that the Florida and Texas economies are growing like gangbusters? It’s not just because of senior citizens moving here from other areas of the country. It’s about tax policy. Florida and Texas have no state income tax. As such, people moving here in droves, and businesses in Florida are growing left and right — and this guy wants to shut it down. 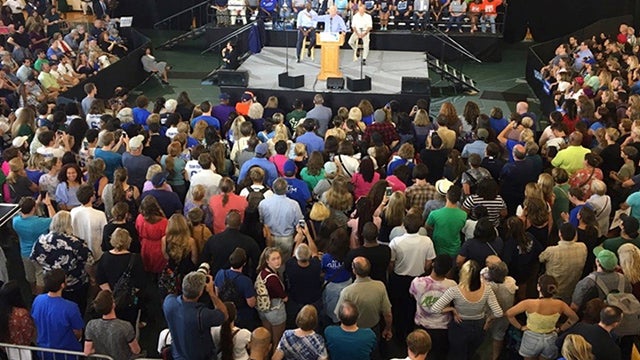 This guy is a… This Andrew Gillum is a classic modern-day Democrat leftist who don’t want there to be any private sector success because the private sector is corrupt, it’s unfair, it’s illegitimate, and not everybody’s treated equally and so forth. This guy wants government in charge of virtually everything for his express purpose of determining outcomes based on what he thinks is equality and fairness. He doesn’t know about running businesses.

Rick Scott’s the outgoing governor. Gosh, I hope this guy beats Bill Nelson. He’s running for the Senate down here. Rick Scott is one of these guys that’s self-made, and he has become very successful. And as governor, he tackled a whole bunch of emergencies and disasters and just came through with flying colors. Nelson has become just a static flatline, just a walking echo chamber for whatever leftist leadership in the Senate wants done, whether it’s of benefit to Florida or not. But DeSantis would be great.

DeSantis is a Reaganite conservative Republican who happens to have a good relationship with Trump. But Andrew Gillum? It’s the exact wrong decision to make. There’s nothing — and it’s not just Andrew Gillum. This is no time to be electing people who want to put the brakes on what is happing in this country right now. We’ve got more job openings than there people to fill them. We have people getting raises, getting bonuses, businesses growing left and right.

The economy is rising. We’ve got trade practices coming back into balance now. We’ve got people feeling more optimistic about America, at least in surveys, than they have expressed in quite a while. The trend is constantly upward. People have exceptionally positive thoughts about the future, and electing any extreme leftist Democrat as governor or as senator — or even as president in two years — would be an absolute disaster. It would constitute rolling back every achievement that has been made in the past two years.

If you want to go back to flatline economics of decline where the president tells you, “This is as good as it gets and you better get used to it because America’s greatness in the past really wasn’t deserved. We stole a lot of what we had. We mistreated people all over the world…” If you want to invest in the idea that the United States is the problem in the world and not the solution, then you’ll elect these Democrats. I can’t imagine people who are engaged and thinking about this and living lives actively involved would in any way want to put the brakes on this.

And for what reason? ‘Cause they don’t like Trump tweeting? Because they don’t like Trump’s manners? Because Trump is gauche or whatever? Some of the silliest, stupidest reasons. That’s not why Trump is supported! Trump is supported because he’s the last line to hold off on this attempt at transforming America into being something that it was never founded to be. If you want America to actually determined, shaped by…

Like this mob of 7,000 people demanding entry into the United States and demanding benefits from the United States because they are deserved, because America’s responsible for what’s going on in their home countries. If that’s what you want America to be, then gotta vote Democrat, because that’s what the Democrat Party of today wants to happen. Successful America needs to be punished. Whatever else is going on, it still boils down to an ages-old argument over philosophy.

The Democrat Party has become a party of groups of victims, and these victims have turned over their own futures to the Democrat Party. They have decided that life is too unfair and too mean and they can’t overcome any adversity without the Democrats running interference, without the government running interference. So more and more what they want by voting for Democrats, is they want Democrats to punish the successful or anybody that these people believe is responsible for their unhappiness!

The Democrat Party has become a party of mean-spirited extremism. The Democrat Party has become the home of people, sadly, with psychological disorders who are demanding that the political system of the country address those disorders and normalize them. That’s not the purpose of the United States government, and it can’t succeed anyway. I mean, this is just hands down. Andrew Gillum personifies — personifies — the exact, total, wrong direction to take at any time, but especially now.

Let me go to these photos. Put one of these up on the Dittocam. If you’re watching, this is Joe Biden at a rally for Andrew Gillum. The media is trying to hide the fact that nobody is showing up. That is one view of a crowd. I don’t know where this was. Didn’t have a chance to get. Just grabbed some pictures on the fly at the break at the top of the hour. There are people standing single file on the second floor. It looks like (in the next picture you’ll see just a second) a high school gym, and nobody’s there. 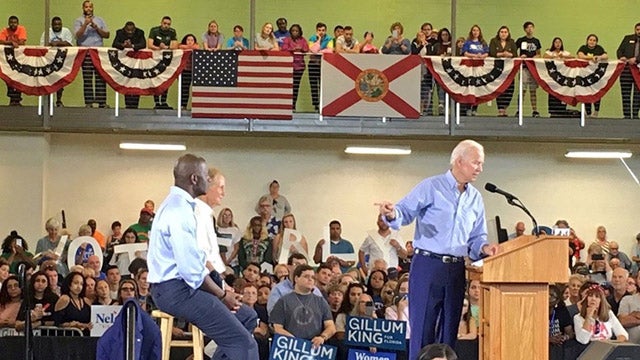 And Joe Biden is the big draw! And Gillum is sitting there with somebody else and they’re watching Biden speak, and there’s no excitement in this room. There’s nothing anywhere near what happens at a Trump rally. But these people believe that Biden is the answer. They believe Biden is the answer to Trump. I’m not kidding. You’ve seen this in news stories the last couple of weeks. Put the next picture up. This is a different shot of it. Look at how tiny that is.

We’ll put this at RushLimbaugh.com. I’ll get these pictures up so you can see them at our website eventually. Tiny stage with Biden and Gillum there on the left as you’re looking at it. But look at how narrow the main floor is and how few rows the sides are, and that’s it. The Democrats, the media… Just like they’re not reporting the crowd size at Trump rallies and particularly the people that can’t get in, they’re not talking about how few people are showing up at rallies led and inspired by Joe Biden.

And I’m telling you, both of these are seriously underreported stories purposely. This is the kind of crowd that you see at a party that’s not lighting any fires under people. I mean, we’re hearing about how Democrat Party base so motivated; so inspired. The Democrat base and fact the American people so hate Trump, they can’t wait! “The voter enthusiasm,” the media’s told us, “and the enthusiasm and the energy is all on the Democrat side.”

Well, you can’t see it. Anywhere you look where there would be evidence of it, there isn’t! Where there is evidence of massive energy, massive desire, massive expectations is on the Trump side. And Trump happens to be on the Republican side. And he’s doing these rallies in tiny places other than recently, except this one in Texas. He’s been going in to shore up the Senate, help the House and so forth. He’s doing four or five of these a week now. Everywhere he goes, there are three times as many people that can’t get in as those who can.