RUSH: Folks, I’m gonna just tell you right now. I don’t believe, and I haven’t believed for a long time, that there has been this slam-dunk blue wave. What we’re being told right now is that six months ago, nine months ago, all the way back to December when the first generic ballots polls were taken, that the Democrats had a 12- to 13-point advantage, that the American people realized their mistake electing Trump and Republicans and couldn’t wait to put Democrats back in power.

Now, that argued against real life. Real life since 2010 is the Democrats have been losing elections left and right. But, for some reason, in the 2018 midterms, the American people were all of a sudden gonna admit all these mistakes they’ve made and put Democrats back in power. I don’t believe it! But we got media narratives that a gigantic blue wave was gonna happen. We had that media narrative go on from December last year all the way through September of this year — and then, and then the generic ballot started tightening, and then it began to look as if, “Weeeeell, maybe it won’t be as big a blue wave.

“Republicans look at they might actually gain seats in the Senate. Oh, no! Now the president’s approval number is higher than it’s ever been.” In CNN’s own poll, he’s at 44%. Rasmussen has Trump as 51%. There’s nothing happening that suggests a blue wave is happening! I, frankly, don’t believe there ever was one. I think as we get closer to the moment of truth (i.e., Election Day) people have to start reeling in these madcap predictions and projections because they want to get as close to accurate as they can for the sake of their business.

I don’t think it ever did. I don’t think it ever did exist. I think it was made up, manufactured. You can get the poll result you want, depending on when you take the poll and who you decide to put in your sample. There is no way… There is simply no way that a political party openly promoting this invasion of 7,000, now 8,000 illegal aliens is gonna be swept to a massive landslide win! The American people are not angry that we have not stopped this. The American people en masse are not wanting more illegal immigration.

You and your buddies have been telling everybody this was gonna be a blue wave landslide wipeout ever since last December. You have made book on it. You’ve run campaigns on it. You ran the Kavanaugh operation based on it. You’re running this mob coming up here from Central and South America on it! Now all of a sudden two weeks out, almost two weeks to the day (sputtering), “Well… well… well, we always knew the election was gonna be close.”

It ticks me off, the number of Republicans (I can give you names if I wanted to) saying, “Oh, yeah. We’re gonna lose the House. The objective now is to make sure we hold the Senate.” How long is it gonna take — how many cycles, how many years is it gonna take — for our side to realize the media is jamming ’em every day? The media is making it up. The media and the pollsters and whoever else have an agenda, and they’re servicing it every day.

I can’t tell you the number of guys I’ve talked to who say, “Oh, yeah, there’s no way we hold the House, Rush.”

“Why are you believing it?” I’ve asked ’em point-blank. “How many people do you run into who you know voted for Trump who wish they hadn’t?”

“So why do you think the blue wave?”

“Why do you believe it? Where is the trend that Democrats are winning elections?”

Seventy-seven thousand people have signed up to get into the Trump rally in Texas for Cruz that holds 17,000 people. Where do you get this idea Democrats are popular?

RUSH: Just a few headlines here to illustrate points previously made. TheHill.com: “Democrats Slide in Battle for Senate — The battle for control of the Senate is looking worse and worse for Democrats…” This is from yesterday. Sunday’s edition is the big day for news. “[J]ust a month ago [it looked like the Democrats] saw a path to the majority but now increasingly look like they could lose more seats and have a smaller minority next year.” 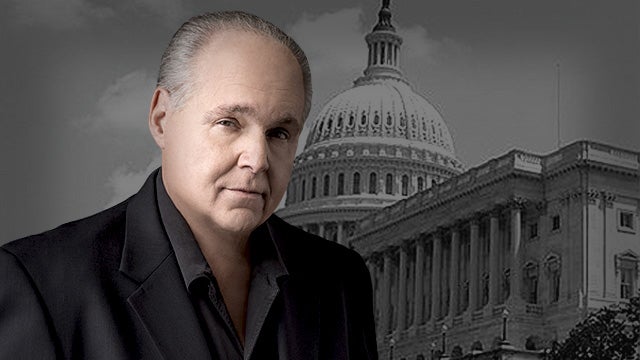 Look for 56 Republican seats in the Senate when this is all over. You like that number, Snerdley? Next headline from Washington Post: “House Democrats’ Hope for Wave Election Diminishes as Republicans Rebound.” The Democrats are saying (paraphrased), “Well, no, no, wait a minute. We got the big issue. We got health care! Health care is our big issue, the No. 1 issue for voters.” Uh, wait a minute, Democrats. You’ve got nothing.

(impression) “No, no, no, no! Suburban women are supposed to vote for Democrats. Damn it! Damn it! What’s happening?” The Democrats don’t understand. I think the fury of female suburban voters, this anger they have? I think it’s a myth, a media myth concocted in the hope that it will convince some suburban women to vote the way the Washington Post wants them to. It’s like we had a guy on many years ago when the economy was doing well but the media wasn’t reporting it.

I had a guy call me; he felt guilty. He was doing well. He was worried his neighbors weren’t, and I said, “Why you’re worried about that?” “Well, I turn the media on every day, tell you the economy’s stagnant, it’s kind of flatlining, nothing…” I said, “Don’t believe that.” He knew the economy was doing well because of the way it was impacting him, but he didn’t have the confidence to believe it was happening for everybody else. Same thing here.

They’ve tried to make these suburban women think that every other suburban woman out there hates Trump, hates the Republicans. And so a suburban woman that doesn’t hate Trump and actually likes Trump says, “What’s weird about me?” Nothing. You’re in the majority, actually. Politico. Headline: “Hey, Republicans Might Hold onto the House After All.” Wait. What?

“Could Republicans do the unthinkable … and keep a majority in the House? Politico’s Rachel Bade calls it ‘unlikely,’ but not impossible. Bade hears from Republicans and ‘even a few Democrats’ that the political winds have shifted enough this month that it might result in a slight GOP majority…” Gee, I wonder what happened this month. Kavanaugh. Kavanaugh. But this is if you believe anything shifted.

They want us to believe 13 months ago, nine months ago, eight months ago, seven months ago, the people of this country couldn’t wait to elect Democrats. But something’s happened in the last month to change their mind about this. Carl Bernstein of Woodward and Bernstein was on CNN Sunday. He said that Trump is preparing to call the midterm elections illegitimate if Democrats take power. Man, you talk about projection? This is exactly what the Democrats have been doing for two years!

Trump’s election was illegitimate because the Russians conspired to steal it. Right? “Journalist Carl Bernstein,” while it was unknown if he was sober at the time, “said Sunday that President Trump has discussed ways to challenge the results of the midterm elections if the GOP’s grasp on power slips. During an appearance on CNN, Bernstein said his sources relayed this information to him on Friday, warning that Trump has talked about a disruption campaign if the results are close but have the Democrats taking control of the House or Senate.

“‘I talked to people … in touch with the White House on Friday who believe that, if the congressional midterms are very close and the Democrats were to win by five or seven seats, that Trump is already talking about how to throw legal challenges into the courts, sow confusion, declare a victory actually, and say that the election’s been illegitimate,’ Bernstein said…” Where have we heard of that gambit before? Why, it’s still being tried! That gambit is still being run! It’s called the special counsel! Robert Mueller!

And the American media and the Democrat Party.