RUSH: I’m gonna get to Obama in Nevada. You know, the CNN graphic that’s been running all day, “Trump Spreads Lies and Stokes Fear Ahead of Election.” I don’t care what Donald Trump lies about, misstates or whatever. There is nobody in Barack Obama’s league in terms of purposely lying to deceive people, such as, “You like your doctor? You keep your doctor! If you like your health plan, you get to keep your health plan,” and “With Obamacare, your average annual premium will be reduced by $2,500.” 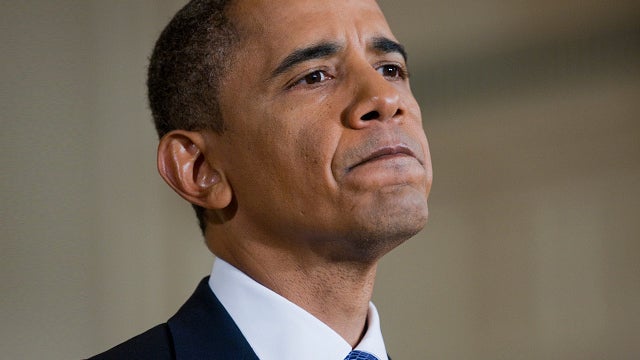 Those lies were told over and over and over again to dupe unwitting Americans into believing that Obamacare was gonna essentially be cost free, that it wasn’t gonna cost them very much, if anything, at all — and that if they like their doctor and plan, there wasn’t gonna be any change. We later found out. Of course, we knew from the beginning he was lying about it and tried to tell everybody he was lying about it.

People didn’t want to believe the first African-American president would lie about such things. So much hope was invested in Obama — misplaced, as it turned out. Those lies — and they were just the tip of the iceberg. Those lies were meant to deceive people. Those lies were meant to make fools out of people, to get them to agree with Obama’s statist takeover of one-sixth of the U.S. economy for the express purpose of being able to control people’s lives.

If you control their health care, if you control people’s access to health care, you control them. You can determine what they’ll be allowed to eat or not. You can even determine what political party gets preference if there is a line at the doctor, and this is exactly what Obama and the Democrats were doing. Didn’t get a single Republican vote. Did the media run banner headlines, “Obama Spreads Lies and Stokes Fear to Pass Obamacare”? Ha! No way.

How about the Benghazi disaster with Obama and Hillary lying for months that a video produced by somebody nobody ever heard of caused the unrest that led to the riots in Benghazi, knowing all along that it was a preplanned and executed terror attack that the Obama administration did nothing to defend? Those are lies designed to mislead, to deceive, and to protect himself and Hillary Clinton and everybody else that was in on that damn fool decision.

How about the lies Obama told about drawing red lines in Syria? The Obama administration was a series of lies upon lies, and deceptions upon deceptions, and the American people quickly saw through it and began defeating Democrats at the polls in record numbers starting in the 2010 midterms. And Obama is out lying today! He went out and did his own little rally in Nevada, and he tried to tell everybody (impression), “Well, when you think about this great economy, yoooou remember who started it, right? Remember who started it.”

And he had his face and his head up in the air, looking up over everybody like he’s God, like you gotta look up to see him, but you’re so far beneath him, he can’t see you. He’s just looking up like this over everybody. “You just remember. You just tell ’em! You remember where this great economy started.” Barack Obama couldn’t create these economic circumstances if his life depended on it, because he doesn’t know how!

How about Obama colluding with Russia on getting rid of American nuclear weapons? On open mic right before the 2012 presidential election, Obama’s overheard talking to Putin’s No. 1 aide, he says, “You tell Vladimir to be patient. I’ll have a lot more flexibility after this election.” Flexibility. Meaning: “I don’t have to run again and so I’ll be able to even get rid of more nukes in our stockpile than I could before.” 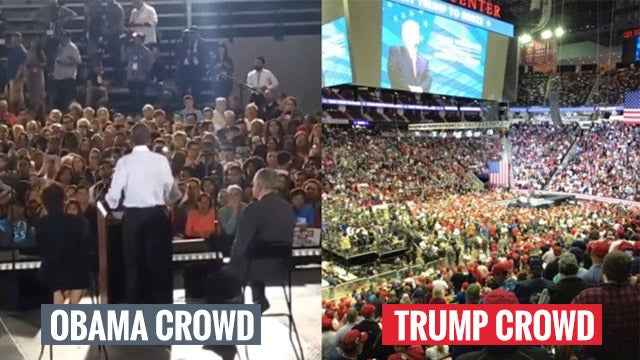 We got a picture for you the Dittocam; we’re gonna send this up to RushLimbaugh.com. We have two pictures side by side. Make the switch. On the left is Obama in Nevada. On the right is Trump last night in Houston. Take a look. You can’t even see Trump in that picture on the right. The media is a large contingent of the people on the floor there. Maybe from that angle it’s about one-third of it. You could have put another 500 people in there if you could have kicked the media out. But just compare those two photos. It’s a Democrat candidate for the Senate in Nevada and Obama. The crowd there on the floor? This is a tiny, little like junior high school gym! Is the media telling you about this mediocre, nonexistent crowd?

RUSH: Last night at the rally in Houston for Ted Cruz and pretty much the whole state of Texas, Trump said (summarized), “You know what? If you really want the fake news to investigate Hillary Clinton, I’m gonna have to nominate her to the Supreme Court. It’s the only way that we’re gonna get an investigation into Hillary.” (laughing) Would it be worth it? If we could deny her the nomination. It might be interesting to see what would happen there.