Has Anyone Seen Clock Boy?

RUSH: Here is Steve in Kennewick, Washington. You’re next. It’s great to have you, sir. Hi.

CALLER: Greetings, Rush, from the right side of the once-great state of Washington where we’re working here hard to unseat Maria Cantwell so she can spend more time hiking and mountain climbing as her community service.

CALLER: (chuckles) Thank you. Hey, I just wanted to note, it seems like Clock Boy might be the perpetrator of these bombings and wondered if you had any insight through your connections (unintelligible).

RUSH: You know, you are the second person today who said that to me. I got an email asking me about Clock Boy and whatever happened to him. Do you remember Clock Boy? He was a 14-year-old Islamic student in a science project or science fair made a clock, a timer that looked like one that you would attach to an explosive. He ended up winning a science project prize, a science project award for this thing, I believe, and he was feted and taken to great…

Didn’t he end up at the White House? Didn’t Obama fete this kid? Didn’t Obama…? What am I remembering? Didn’t Obama, didn’t some government agency or official welcome the kid to Washington and praise him for being an advanced scientific mind, when essentially all his project was was a timer, a clock of some kind? I have the email here. I got the call here out of the blue and I don’t have the email. I have to get it during the break, the email asking me about Clock Boy. He was 14 years old, and it became a cause celebre.

The kid was supposedly well beyond his years, brilliant, brilliant, brilliant engineering mind — and when everybody finally got a look at what he had done, it was just a timer, like the kind of timer that would be attached to some kind of… My memory was explosive device. Now, his project was not a bomb or an explosive device. It turned out to be not nearly as technologically advanced as its hype. (interruption) Right, Obama… I knew that. Obama invited Clock Boy to the White House and made a big deal out of his “achievement” and so forth.

Be patient. We’ll find it. The obvious question is if that guy could have perpetrated… If a 14-year-old kid could have perpetrated a scam — and his parents were in on it too. He got invitations to go to MIT and other schools. And really the device he put together was not… My memory is it was not advanced at all. It was almost the exact opposite. It was almost so basic that everybody was scratching their heads and wondering what was so remarkable about it. Steve, I appreciate the call. As I say, I’ll dig it out when I have a chance.

RUSH: Now, here are the Clock Boy details. His name, Ahmed Mohamed. “When Ahmed Mohamed went to his high school in Irving, Texas,” this story back in 2015, “he was so excited.” He was a teenager. This is a CNN story here, by the way.

“A teenager with dreams of becoming an engineer, he wanted to show his teacher the digital clock he’d made from a pencil case. The 14-year-old’s day ended not with praise, but punishment, after the school called police and he was arrested. ‘I built a clock to impress my teacher but when I showed it to her, she thought it was a threat to her,’ Ahmed told reporters Wednesday. ‘It was really sad that she took the wrong impression of it.’ 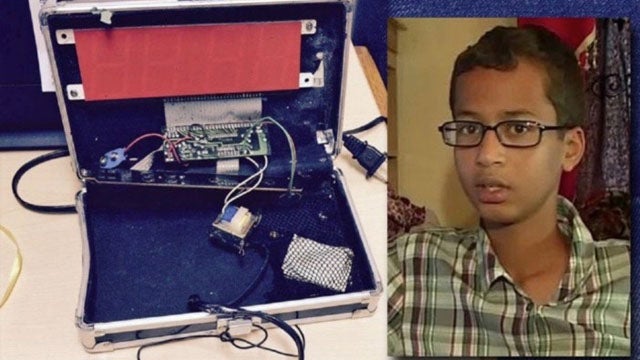 “Ahmed talked to the media gathered on his front yard and appeared to wear the same NASA T-shirt he had on in a picture taken as he was being arrested. In the image, he looks confused and upset…” What he had done, he disassembled a Radio Shack clock. He was trying to make his briefcase look like a bomb, which he submitted to his class on the anniversary of 9/11! He reassembled the parts of a Radio Shack digital clock, put it in a large pencil container that looked like a briefcase.

He then took it to school on the anniversary of 9/11 to show his teachers, who thought it looked like a bomb, which it did! We’ve got a picture of it here. Put the picture up. I transferred the picture of the guy’s bomb, well his briefcase, this is at the time, Ahmed Mohamed on the Dittocam here. He’s on the right. And his little science project there is on the left. He disassembled a Radio Shack clock and put it in a briefcase, make it look like a bomb.

He ends up getting invited… Because he was kicked out of school because he got in trouble, Obama invited him to the White House. “He ended up basically being a victim of anti-Islamic bias! How dare you think that this young man is something dangerous when he attempts a science project that looks like a bomb in a briefcase! What kind of bigot are you, to think that a kid designing a science project look like bomb in a briefcase has anything to do with terrorism?”

So he got invited to MIT, got invited to the White House to correct the terrible injustice that was visited upon him by his bigoted, racist teachers and classmates, who didn’t have the tolerance and understanding to look at a disassembled timer and clock from Radio Shack in a briefcase and not see something that looked like a timer bomb. What’s this? (interruption) Well, it does look like a bomb. It looks like… If you… (interruption) Exactly. And if you tried to mail that, what would happen to you? I mean, it happened on the anniversary of 9/11.