Donald Trump Was Elected to Fight Back, Not Tone It Down

RUSH: We’ve got a caller coming up talking about Obama being associated with hardcore anti-Semites like Sharpton, Reverend Wright, Louis Farrakhan. That’s absolutely true, and there’s photographic evidence of it, and when those photos ended up being published in many cases, the Drive-Bys cropped Farrakhan out of the photos. One of the examples is at the funeral for Aretha Franklin. Anyway, the Democrats are demanding that Trump tone it down. 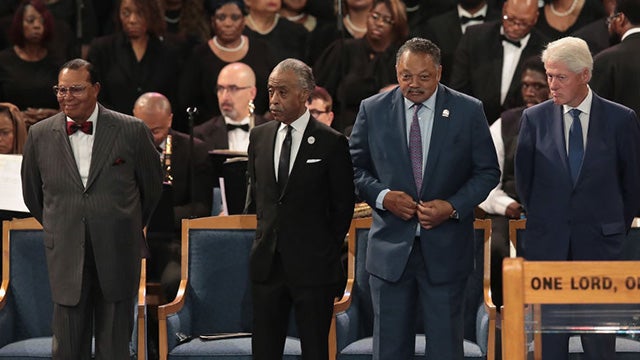 Did you love it when Trump said, “I have toned it down. If you want me to tone it back up, I will.” Donald Trump was elected to be different. Donald Trump was elected because people were fed up with politics-as-usual. I’m gonna tell you this: People fed up with politics see the Democrats and the media politicizing everything. It’s not going to send people running to the Democrat Party. Quite the opposite of what the media thinks.

See, the media and the Democrats obviously think that a majority of the American people want to see the country the way the Democrats do, through a lens of everything being political. And people don’t want to see it that way. The Democrats and the media are telling Trump to tone it down, but they tone nothing down themselves. What was it the mayor of Baltimore said to protesters? (summarized) “We need to give them space to destroy. We need to stand back and let them get it out of their system.”

They say nothing when Republicans are gunned down. They abuse power to hide Hillary’s crimes to fix elections, to run silent coups against a duly elected president. So the left wants Trump to tone down his efforts at self-defense! That’s what Trump is doing. He’s assaulted. He has said countless times, “If I’m hit, I’m gonna hit back.” When Trump is blamed for the actions of a lunatic, he’s told to be more dignified, remain silent, be like Mitt Romney would be. Be reserved and so forth.

RUSH: Democrats wanted Brett Kavanaugh to sit back and take it. You see, the way this works is, a 36-year-old allegation can be made for which there is no evidence and for which four supposed witnesses can’t even place themselves at the place ’cause the victim doesn’t know where it happened, doesn’t know when it happened. But it becomes real, and we gotta destroy somebody’s life, we have to destroy somebody’s career, and Kavanaugh is supposed to sit back and just take it. 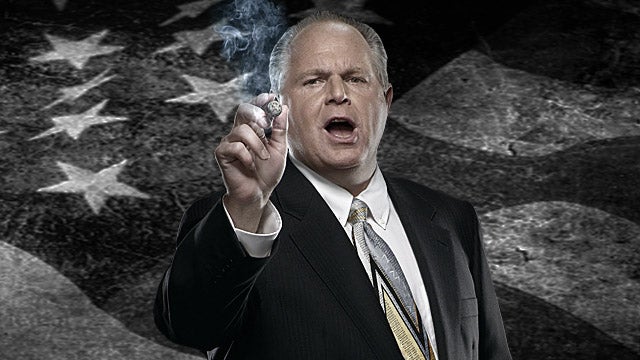 See, those are the old rules of Washington: People under assault take it. “The best way to deal with it,” they are advised, “is to not make waves. Sit there and take it,” and that’s how responsible, reasonable Republicans have always acted. Well, that’s not who Donald Trump is. He wasn’t elected to act that way. If you ask me, the wrong people are being told to tone it down. The left needs to tone down its organized violence.

The left needs to tone down all of these political stunts that are, in many ways, designed to provoke a reaction from people because they utilize abuses of power and character assassination. The character being assassinated is just supposed to sit there, just supposed to take it. That’s how you get ahead in Washington. If you’re under the gun, you take it. You sit there and take it and realize it’s just politics. “Don’t take it personally, Judge Kavanaugh. Don’t take it personally.

“It’s just politics. Because everybody hates Trump, we can’t let you on the Supreme Court, and you’re gonna have to sit there and that’s the price you’re gonna have to pay for this guy being elected,” and he’s supposed to sit there and take it. He wasn’t supposed to be angry while he was smeared and while his family was threatened and while his life and future were in the process of being destroyed. He wasn’t supposed to say anything. “Just sit there and take it. That’s the rules. That’s the way it works in Washington. Not personal. Just business. Just politics.”

And then a couple of years afterwards, everybody forgets it and everybody likes Kavanaugh, except Kavanaugh’s life is ruined, and he’s never supposed to want to get even. He’s never supposed to fight for himself. Trump, ditto. He’s not supposed to stand up to this. But that’s who Trump is. They’re not used to it. They thought they would have sent Trump packing. A year and a half ago, they thought they’d be rid of Donald Trump, and they still aren’t.

Let’s go to the phones. We have Steve in Pittsburgh with us. You’re up first today, Steve. Thank you for calling. Hello.

CALLER: Hey, Rush. Pleasure to speak with you.

CALLER: Hey, I can tell you that last week in front of the Pittsburgh school board, they had a proposal to arm the school police, and it was voted down 8-1. Now, this didn’t happen in a school, but, you know, in a similar situation President Trump came out and said, “If they had an armed guard, this could have been prevented.” And then you have the mayor — Bill Peduto, who is very anti-Trump, very liberal — came out and said that an armed guard would not have stopped them. What we need is more gun control. I mean, how many things have to happen before they realize that more gun control is not the answer; putting someone with a gun that can stop this is?

RUSH: Well, look, I hate to be the one to tell you, but there’s no amount of death, there’s no amount of shooting that would ever get your mayor to change his mind about what he believes, because, you see, it’s really not about guns. He thinks it is and his supporters do, but it’s not really about guns. It’s about something much larger than that. It’s about being able to tell people what they can and can’t have. It’s about telling people that they have freedom of speech, “Except you can’t say this; you can’t say that. You can’t.

“But other than that, you got full freedom of speech with us leftists. Yeah, you want to have a gun? You can have a gun except in these circumstances, blah, blah, blah, blah, blah, blah. Why, we’re all for freedom, as we define it.” He mentioned this. Let’s go to the audio sound bites. I want to start here with Trump himself. This is an example. I’m sure some people were shocked on Saturday when this was Trump’s reaction speaking with reporters. 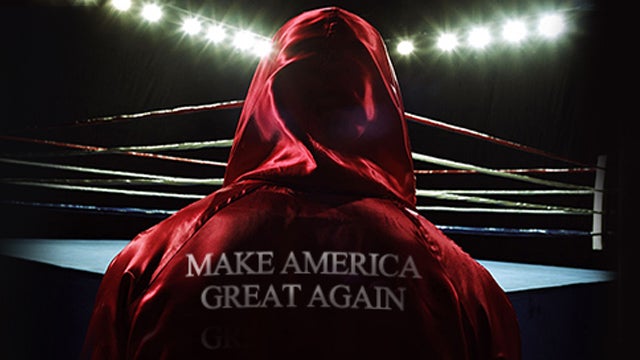 He was at Joint Base Andrews. It used to be Andrews Air Force Base. In case you’re wondering what is this Joint Base business, well, it used to be Andrews Air Force Base and then there was another military base close by, another branch close by. They unified ’em all and call it Joint Base, where multiple services are in the same place. So that’s where Air Force One is parked. That’s where Trump takes the helicopter to get on board Air Force One when he’s gonna travel.

Anti-Semitism, they think, oh, there’s a lot! Racism. So they’re not really focused on this guy’s guns as much as they would otherwise, and that ought to tell you something. This guy’s loaded with guns. Why are the Drive-Bys not really focusing on that when they always do? Because it’s a political calculation that there’s more fertile ground here, and that would be Trump is an anti-Semite or a bigot or is a racist. Anyway, the reporter says, “Mr. President, do you think you need to revisit gun laws.” 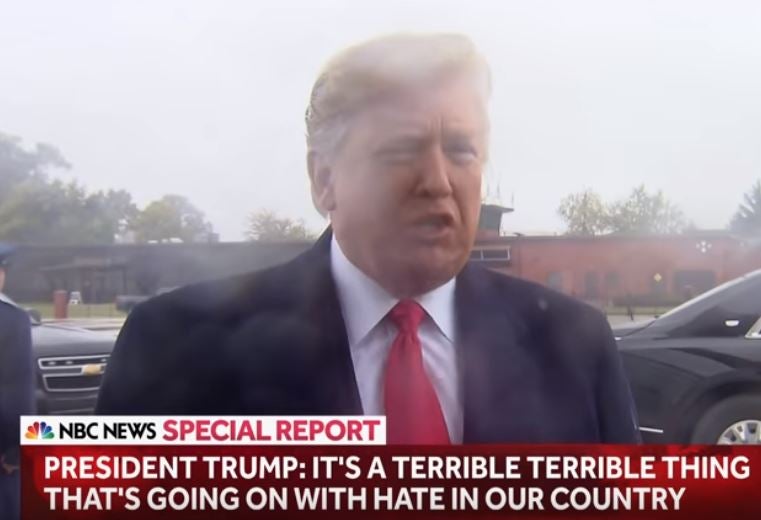 RUSH: And next up, F. Chuck Todd of Meet the Press — who thought that the Russians were behind the pipe bomber, Cesar Sayoc. Chuck thought that the Russians might be behind that. This guy… That also gets more curious as time unfolds. This guy was a… Have you ever heard of a routine failure? You ever known anybody that was always on the verge of a big score, hitting it big, and never amounted to anything?

That apparently was this guy, Caesar Sayoc. Anyway we’ll get back to him in a minute. Here’s the mayor of Pittsburgh with F. Chuck Todd on Meet the Press on Sunday. His name is William Peduto, and F. Chuck said, “Is there anything the president personally can do? Is there anything you would like to see him do personally about…?” See how this works?

So you have somebody clearly mentally unstable who has been a nutcase for a number of years — who hates Trump, by the way, because he thinks Trump is a sellout to the Jewish people — and here’s F. Chuck Todd asking the mayor of Pittsburgh (summarized), “Is Trump responsible? Is Trump culpable? Is there something you’d like to see Trump do personally about gun violence?”

PEDUTO: I belong to an organization, a bipartisan organization called Mayors Against Illegal Guns. I don’t think that the answer to this problem is solved by having our synagogues, mosques, and churches filled with armed guards or our schools filled with armed guards. I think we’re dealing with an irrational person who acted irrationally, and trying to create laws around that is not the way that we should govern. 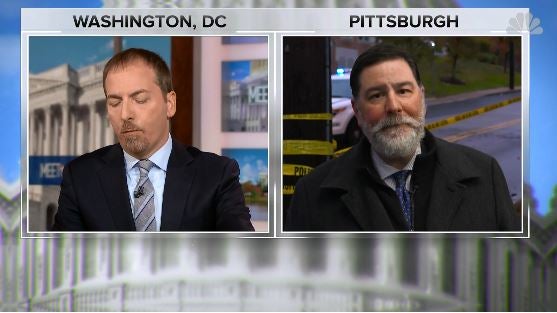 RUSH: That’s all the left does is create laws to justify irrational behavior — and force on the rest of us in the mainstream of culture an acceptance of irrational behavior — and they try to tell us that it’s normal and that we’re the bigots or whatever if we reject that as normal. “I think we’re dealing with an irrational person who acted irrationally and trying to create laws around that…” You mean you’re telling me we can’t have laws or procedures or policies or smart thinking to deal with irrational people?

The mistake is dealing with irrational people rationally. But not protecting yourself from them? That’s not a danger? So you see, defensive weapons, according to the mayor of Pittsburgh, are not called for here, are not the thing to do. Also in these questions… Look, I know the Drive-Bys hate Trump and I know they’re trying to get rid of Trump, but even take Trump out of this. The fact that they’re looking for Washington to have the solutions? “Washington must do something! Somebody in Washington must….”

This happened in Pittsburgh in a state, Pennsylvania. Yet with a nutcase that hated the president, somehow it’s up to the president to have all the… No, it’s actually the president’s fault. Trump’s just making a common-sense statement. One more sound bite. This would be audio sound bite No. 3. This morning, CNN’s New Day, the cohost Alisyn Camerota interviewed the Tree of Life rabbi synagogue. His name is Jeffrey Myers. Camerota said, “President Trump is talking about coming to Pittsburgh and coming to your synagogue in the aftermath of this. Do you want him to come?”

MYERS: The president of the United States is always welcome. I’m a citizen. He’s my president. He’s certainly welcome.