RUSH: I didn’t see this. I didn’t watch Fox News Sunday on Sunday, but apparently Chris Wallace… I got a… You know, I’m on Fox News Sunday twice a year during ratings month, and Chris Wallace is always very polite and exceedingly nice and asks me to make sure to tell you not to get mad at him for interrupting me because if he doesn’t, he would never get a question in after he asked the first one.

So I got a note from a golf buddy who watched this past Sunday, “Man, this guy, Wallace! You say he’s a good guy, but this guy’s gone so far left, I don’t know. I don’t know if I can believe what you tell me about him anymore.” So, I go, “What happened?” Well, it clearly wasn’t this. On Fox News Sunday, “Chris Wallace contrasted front-page headlines from The Washington Post the day after Republican Congressman Steve Scalise was shot at an Alexandria, VA … by a Bernie Sanders supporter with the Post’s headline following the capture of mail bomb mastermind and Trump supporter Cesar Sayoc. 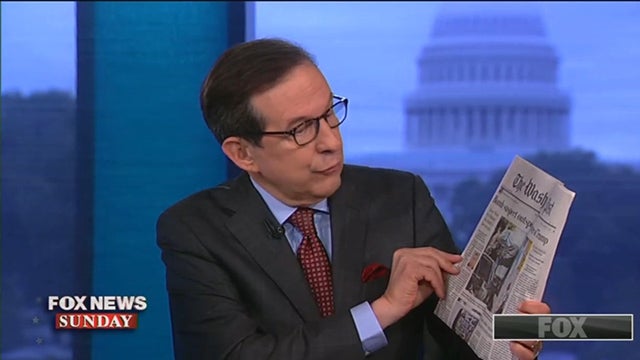 “Not surprisingly, the Post made sure to emphasize that Sayoc’s political views were mentioned in the headline while the” guy who shot up Scalise was not mentioned, politically, at all — and it’s Chris Wallace holding these two headlines up and pointing it out. “The Sayoc headline read ‘Bomb Suspect Outspoken Supporter of Trump.’ Wallace said that the headline really surprised him as he expected the [Washington Post] headline to read ‘Suspect Arrested.’

“A closer inspection of the article finds that it does not even mention that Sayoc was the bombing suspect until the fourth paragraph. Rather, the first three paragraphs read like a psychological profile of Sayoc, talking about his support for President Trump and all of the stickers on his van… On the other hand, the headline after the Scalise shooting read ‘Congressman Shot in Va…'” It didn’t mention my name, it didn’t mention his support for Bernie Sanders.

“The front page article did not mention his support for Sanders but footnoted” like with an asterisk “that his social media posts were ‘highly critical of President Trump…'” So here’s Chris Wallace holding up the obvious evidence of media bias here that he said “surprised” him. Later on, “The Wall Street Journal’s Jason Riley remarked: ‘If you want to know why Trump won’t give up Twitter and social media, that is why. That headline is why,'” and it’s exactly right.

Folks, every day Donald Trump is the only Republican tweeting or informing people about the success of his policies. Every day. The stock market’s good? Trump tweets it. Every day. Consumer confidence is up? Trump tweets it. Whatever the economic news is, whatever the successes that his agenda his administration is having, he tweets it. And if it weren’t for him, it wouldn’t be out there — other than us, of course, here in so-called alternative media.

But the point is, the Republican Party is not even touting the Trump administration’s agenda’s successes. Trump alone is doing it, and that’s why he’s not gonna give up the opportunity to do it, and I hope he never does. But when I realized this, that Trump is the only guy… Like today there are a couple of tweets from Trump tweeting the consumer confidence as being at a record high and relating it to how can peopling be voting Democrat when this kind of great economic news has been the news of the day for two years?

There’s all kinds… You know, Republicans are running for election in 435 House seats, 35/36 Senate seats. Where is…? I know Ronna McDaniel is out there tweeting some things out now, but where is the party in general touting itself and its achievements? You don’t see it, other than from Donald Trump, and he’s not whining about that. He’s unabashed. He just tweets it out and gets it, and he tweets the truth out about the media as they report on him and lie or distort or what have you.

But there is an incredible, an incredible series of success stories that at any time in the past would have been of great help and use and assistance in running for election or reelection, great news that would portray and show the Republican Party in a great light — and Trump’s it for the most part. Really, when you stop to think about it, it is such a one-man show in many regard and such, such a missed opportunity. The consumer confidence news?

I mean, how can that even be, with all of the news you see every day? If you tune in to any Drive-By outlet, even reading the Drudge headlines, you would think we’re on the verge of imploding. Yet consumer confidence is at an all-time high. Well, that’s a reflection of how people are living — literally living — and their thoughts on the future, and it’s robustly positive. How can that be if everybody’s running around miserable and in various stages of fatalism or defeat? 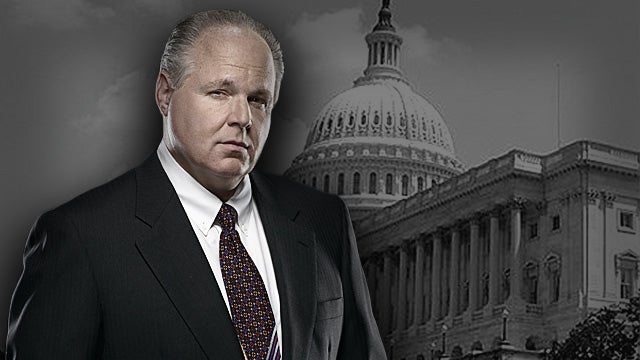 You know, it’s important. It’s very important. Being positive is a hard thing to do in any circumstance. We’re not hard-wired for it. Human beings are hard-wired for pessimism. I’ve discussed this many times. Human beings have a natural tendency to defeatism and fatalism ’cause it’s easier. It leads to victimhood, which, of course, is attractive ’cause it always means somebody else is to blame for what didn’t happen to you or did, the failures or whatever. So it’s just a natural tendency to tend toward the negative.

Everybody knows how and everybody does it.

But it takes direct application. You have to pause and take stock to actually think positively about things. I do it all the time. I get myself in dither over something, and I’ll stop and remind myself how unbelievably fortunate and I am and blessed. But the tendency is to be overwhelmed with the things that are disappointing or depressing or angering. For that reason, it’s easy to get caught up in all of the negativism, and we are no doubt in the midst of a serious, serious challenge for our country.

But it shouldn’t override or negate the real truth that we still live in America and we still have the greatest opportunity, if we want to try to make the most of it and capitalize on it. Yeah, the obstacles may be bigger, and there may be more of them. But it’s still possible, ’cause people are doing it every day. I think the election needs to be looked at with a combination of these ways.

It’s a positive opportunity to continue on the corrective path that we’re on, and it’s just a better way to live. But it takes application to do it when you’re bombarded constantly with negative things, and I must… You know, we all are guilty of doing that, in a sense, because we all want to sound appropriate warnings. But it’s important to keep things in perspective at the same time. I should develop this even more for later discussion.