The Country Was Not United Under Obama!

RUSH: We have a Politico Morning Consul poll: More people blame the media for dividing the country than blame Trump. Okay? That means Trump is on a roll here. That means Trump focusing on the… Trump will tell anybody: Fighting back against the media’s the only chance he’s got. He’s got 92% negative coverage from the combined mainstream media. He’s got no choice but than to fight back, and he’s the only Republican who ever has, and it is one of the reasons why he is so appreciated, loved, and adored.

But let’s dig further into this whole notion of America being divided, because the media and with the help of some prominent Republicans, too, created the impression with Millennials that America was not divided during Obama’s two terms in office. We know that polling data showed a divided America when Obama was elected, but young voters were led to believe that all was well for Obama’s eight years in office. They’ve been lied to about it. They’ve been told… This is before they were old enough to pay close attention.

They’ve been told in class, in school by the media that everybody loved each other, that these divisions in America are relatively new, and they’re brought about by Trump. They were told the economy was good enough, that the world loved Obama. Do you remember all that crap, that the world loved Obama, remember all of the elementary school kids singing songs to our Dear Leader. The media loved the Obamas.

I mean, they were just perfection in every way. Hollywood loved Obama. That’s important to young skulls full of mush. Hollywood and pop culture icons loved Obama. And there were no scandals! That’s what they were told. But there’s another part of this. And it’s just as important. By not fighting Obama tooth and nail on every action he took, Republicans created the impression that everybody was good. Now, we know why they didn’t.

They were afraid of being called racists. Critics of Obama really did have their hands tied. They couldn’t criticize Obama without being called some form of racist jerk, and boy, did Obama parlay that and the Democrats parlay that. They knew full well the Republicans were scared to death to be critical of even policy. So there wasn’t any significant criticism of Obama. They followed the lead of John McCain, Mitt Romney, the two gracious losers that Republicans pitted against Obama.

Both men said that Obama was a swell guy, could be trusted, was a good family man, was a good president creating this illusion that everybody was united behind Obama when it wasn’t. The country… The Democrat Party lost 1,200 elections starting with 2010 because of Obama. There was no way what was being said was true. But in the process, Republicans branded themselves as pushovers. They branded the GOP as not having serious ethical and legal disputes with a corrupt ideologue.

The Republican Party stood aside, it stood down so Obama was allowed to run roughshod with nobody having the guts to push back. No wonder so many people don’t believe Obama had anything to do with corruption at the IRS or the intelligence agents. The Republicans didn’t go to war over any of this. They were scared to death of being called racists! So now when Republicans finally show up to stand up to corrupt leftists, i.e., Trump said to be more divisive than Obama. It’s a big, fat crock!

RUSH: So my point here: When a Republican finally shows up and stands up to corrupt, entitled, lying leftists, why, he is criticized as racist, sexist, bigot, homophobe because nobody ever thought this about Obama, and we were so unified during Obama. I’m talking about young people right now, what they were lied to about, and so that’s what young people see. Young people see… They’ve never seen pushback, folks. Millennials, they’ve never seen political pushback.

A lot of people, in fact, have never seen political pushback like this. It’s why I’ve kept telling everybody from the moment Trump was elected, “Get ready! This is what pushing back against the liberal order looks like.” They are entitled, they are arrogant, they are smug, they’re condescending. They do not consider us to be even real. Conservatism to them is such an aberration, they don’t even acknowledge its existence.

They are the ultimate definition of normal. Anything other than that, it sends ’em into orbit. This is what pushback looks like, and it’s gonna take a lot more of this. A lot of it, and consistently so. But a lot of Millennial people and even Generation Z types have never see this. Obama was the first president they could vote for. Everyone seemingly thought he was a good guy. You couldn’t find anybody criticizing him. You did have some people criticize Obamacare.

But criticizing Obama? You didn’t have anybody — other than us here. But I’m talking about elected Republicans. You didn’t have anybody pushing back on Obama, describing him for what he was and is and who he was and is. They were afraid, scared to death to do it. But the bottom line for that is, nobody saw it. So this illusion that everybody was unified behind Obama was allowed to take root, and it wasn’t true. Again, the evidence.

Look at all the elections Democrats began to lose starting in 2010. Obama was one of the most divisive presidents we’ve ever had. So now here comes Trump, and they see a guy who isn’t a pushover. A guy who speaks bluntly. A guy who doesn’t care if you’re black, white, male, female, or any other identity. He will speak honestly, openly, and aggressively about you if he disagrees with you, and he doesn’t care about your identity. It doesn’t matter to him.

So he becomes the unhinged partisan in the Drive-By Media, when he’s a lone voice/outpost of sanity to gazillions of Americans. Donald Trump speaks truth to elitism. He doesn’t cave, he doesn’t surrender, he doesn’t try to avoid conflict or personal attacks. Trump is behaving the way Republicans should have been acting for decades. Bush didn’t fight back. He had too much respect for the presidency, he said. Didn’t want to soil it by getting down the gutter of politics.

Romney didn’t push back. It just wasn’t… (impression) “Nah! Nah! I don’t do that! It’s not what we do. (muttering) Whatever. If Harry Reid wants to tell people I didn’t pay my taxes for 10 years, then fine. I’ll trust the voters to realize it wasn’t true.” But (sigh), either way, the fact remains that no Republican politician has been telling the truth about Democrats or about leftists until Donald Trump shows up. Well, I know I have and a lot in conservative media, but that’s not the same thing. We’re not actually on that field of battle. 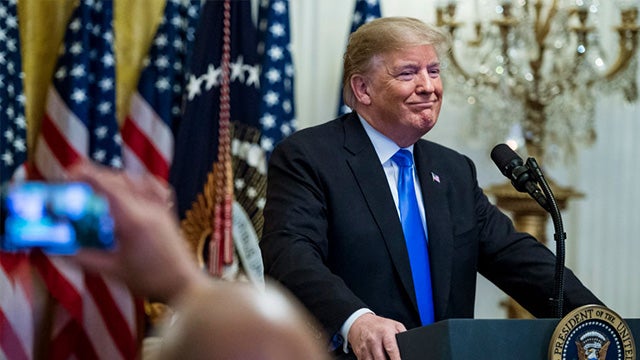 We’re there, but, I mean, none of us are standing for election. I’m talking about the people who get in the arena, get elected or lose, but they are seeking votes. Seeking votes, getting votes is a much different thing than getting an audience. And we just didn’t have a bunch of Republicans who wanted to push back and tell the truth about Democrats. Then Trump comes along and a lot of Republicans felt the same way about him that the Democrats do.

So Trump is doubly opposed. Whether they respected the office too much or they were afraid of confrontations with the first African-American president, it was all the same thing. They branded the Republican Party as a bunch of approving, docile, acquiescence into what Obama and other Democrats were dishing out. President Trump is rebranding party, shaking the Republicans out of a default surrender mode.