It’s Going to Be a Blast in Cape Girardeau Tonight!

RUSH: Oh, man, my friends, I am so excited to be here today. I’m so excited to be here each and every day, but really, really excited to be here this week. It’s gonna be big. It’s not known what’s going to happen. We’re gonna go through some of the audio sound bites today of people who’ve been doing the polls all up to now. The day before the election, they are covering themselves by saying, “We don’t really know.” So what did all these polls mean last week, then? And what did they mean last month? 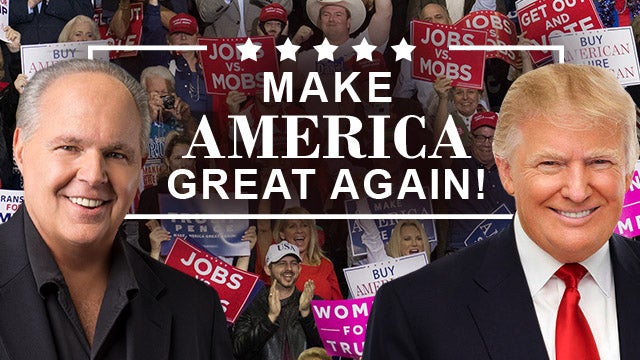 And what did the generic ballot polls mean starting last December, last January? What did it all mean? I’ll tell you what it meant: Nothing. Except for two things: They were using the polling data to shape public opinion and probably fundraise. Those would be the two primary values of early polling. But they tell you nothing about the outcome of any event, particularly that far out because the events that are gonna shape election haven’t happened.

But now a lot of stuff has. I want to start with two things today before we get to the polling data — and we’ve got time to squeeze it all in here today, three hours. And, yes, I have accepted an invitation from the White House to join President Trump tonight in my hometown of Cape Girardeau. It’s the closing argument, final rally. It’s at 9 o’clock Central Time, 10 o’clock Eastern in Cape Girardeau, Missouri.

I’m excited. I’m looking forward to it. I have… You know, I’ve sworn off of these kinds of things some time ago, but they asked — they were very persuasive — and I’m actually thrilled to be there. Lee Greenwood is going to be there tonight. Sean Hannity is in town. He’ll be interviewing President Trump today. So it’s gonna be a blast. It’s gonna be a fabulous time.

They’ve given me a time frame in which to speak, which — I’m just telling you right now — it will be impossible for me to be constrained by this time frame, and I don’t think anybody’s gonna grab the hook in my hometown. But, just in case, I’m gonna do everything I can to keep it to the limit. But I’m not gonna tell you what the limit is. (interruption) No. Nobody’s ever grabbed the hook. Not that they haven’t wanted to, but nobody has ever grabbed the hook.

So I’m looking forward to that.

This is a big day.