RUSH: Okay. The Larry Schweikart piece. Larry Schweikart is, I guess, a teacher, former history professor. He is now a “citizen analyst.” He’s got a Web address called BigLeaguePolitics.com. He analyzes polling data. His take is often unique, differs from the conventional wisdom, and his overall take in this campaign season is that the Democrats are gonna once again be stunned. 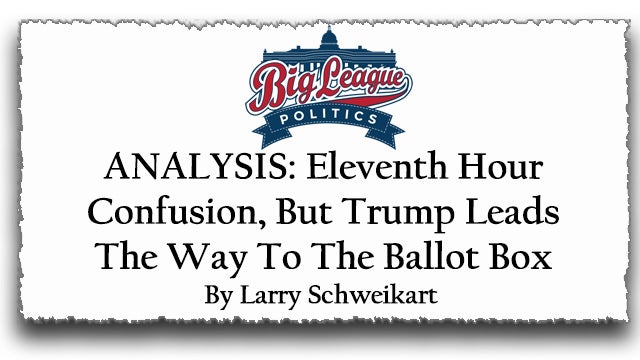 “Eleventh Hour Confusion, But Trump Leads the Way to the Ballot Box,” is the title of his piece here. Let me give you a couple of pull quotes. “One of the untold stories so far is how the fake news media ignores early and absentee voting, which has taken on a life of its own in many key states. In Florida, the state government and both parties have been pushing early voting for years. In Arizona, fully 80% of the voting public will have cast a ballot by Election Day! Yet the fake news media polls and polls, as if nothing has happened.

“Well, a great deal has [already] happened.” Another point: “Overall, the famed [youth] vote,” despite what you’re hearing, “has not materialized, [African-Americans] appear to be voting at about the same level as previous years, except for Georgia and Florida where black candidates for governor are driving up the numbers, and the Democrat base appears to be dozing.” He’s looking at the data; he’s not seeing a fired-up Democrat base. But you’re not…

I guarantee you, you won’t see that anywhere else. Everywhere else, you’re seeing the Democrat base is the only base that’s fired up. The Democrat base has been eager to vote since 2016, and nothin’ can hold ’em back. They can’t wait to get in there and get rid of Trump, if not by reality, by proxy. So fired up! So enthusiastic! Yet they didn’t win a whole lot of special elections. They just not winning elections like they would if all of this pent-up emotion were really there. Schweikart says it isn’t. “The Democrat base appears to be dozing. 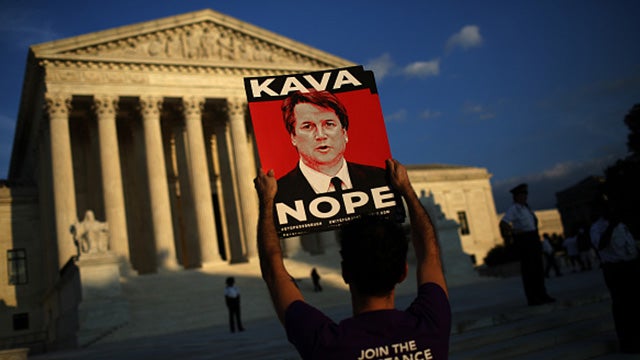 “Not the Republicans. If any weren’t fired up by Kavanaugh, the ‘caravan’ of invaders turned them out. Indeed, pollster,” and he mentions the name of a pollster here, “suggests that merely 10 days ago Republicans were still slightly losing independents and ‘suburban moms’ when the ‘caravan’ changed all that. Overnight the top issue went from ‘health care’ to ‘immigration’ with nothing else close.” This is all his analysis of polling data, by the way.

“The ‘caravan’ has scared the daylights out of both Republican and independent women,” contrary to what the media are telling you. The media are telling you that women hate Republicans because they hate Trump, and that Kavanaugh hearings really angered women because yet another woman came forward and was not listened to and got disappointed. The white male-power structure sent another victim out to pasture. (Snort!) That is not at all the way independent and Republican women saw the Kavanaugh hearings.

It’s just the exact opposite.

Schweikart concludes here: “The ‘caravan’ has scared the daylights out of both Republican and independent women, and likely may be the reason the GOP holds the House and adds a net of five to seven new senators this cycle.” That’s Larry Schweikart. That’s his bottom line. Republicans will hold the House and add five to seven seats in the Senate, and it’s gonna be because of the caravan and Kavanaugh. One thing he’s right about here, and that is immigration is the issue. The caravan is the epitome of it. It does move suburban women to Republican votes.

You’ll never hear that in the Drive-By Media. Here’s how his piece begins: “Here we are at the 11th hour. We have seen a substantial amount of data from early and absentee voting, virtually all of it quite good for the [Republicans] but none of it a ‘knockout’ blow where we can absolutely ‘call’ many races. Nationally, Rasmussen today had Donald Trump at 51% approval and the Republicans with a one-point lead in the generic race. … One of the untold stories so far is how the fake news media ignores early and absentee voting…” 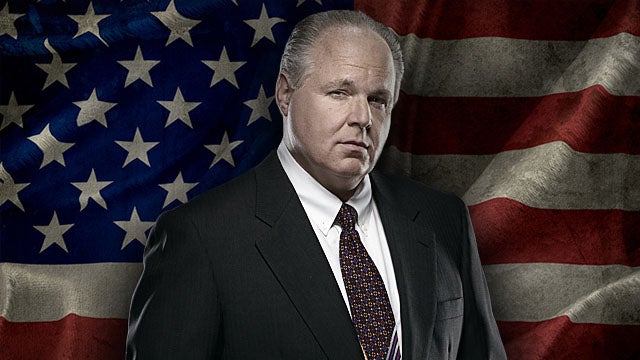 If I may offer, they haven’t really ignored it. They have talked about how much of it there’s been. But again, the absentee voting… Even though the numbers favor Republicans leading in the number of absence votes, it doesn’t tell you how people are voting. The media still persist in reporting that the early voting is a gigantic Democratic advantage, I guess because they think it always has been. But it may not be the case here.

And then they go out and they find a couple random people that they claim were Trump voters to voice that. But notice they don’t find very many? Wouldn’t you think, if that were the case, that you couldn’t get away from the media showing you angry Trump voters who wish they hadn’t voted for Trump? If those people were all over the place, the media would have found them by now and you’d have been tired of hearing about it.

But they haven’t even made any effort here to make that up. They just report it. They just report that everybody hates Trump, everybody’s embarrassed by Trump’s tweets, everybody wishes Trump would stop. And then they go get Never Trumpers like Max Boot and others, and they quote them, and that’s supposed to represent all Republicans. You’re being greatly manipulated and vastly misled on the subject of Republican enthusiasm. You’re being led to believe (sigh) that there’s more embarrassment than there is enthusiasm.

Meanwhile, look at the crowds at Trump rallies.

I didn’t see anybody embarrassed last night, and nobody has either at any of the other rallies.