RUSH: We’ll get to the CNN lawsuit of the White House. They’re suing a lot of people. CNN is suing Trump and Sarah Sanders and the Secret Service and the young White House employee trying to take the microphone away from Acosta who would not surrender it.

What CNN wants us to believe is that Jim Acosta’s constitutional right to sit in the White House pressroom and grandstand cannot be denied, that it can’t be taken away no matter what he does. That Jim Acosta has an unalienable right to sit there in the pressroom and harass Donald Trump, because, after all, the Declaration of Independence says right there: All men are endowed by their creator with certain unalienable rights including life, liberty, press passes, and the pursuit of happiness. See, right there. Press passes are in the Declaration. That’s what the CNN people think.

And then there’s the First Amendment. You may think you know what the First Amendment is, but let me read it to you: Congress shall make no law respecting an establishment of religion or prohibiting the free exercise thereof or abridging the freedom of Jim Acosta or of the press or the right of the people peaceably to assemble and to petition government for a redress of grievances, including Jim Acosta.

Because, you see, the White House is not prohibiting CNN from being in there. CNN is not being denied access. CNN is not being denied the opportunity to ask questions or harass the president. CNN’s got a reporter in there replacing Acosta. There literally are no grounds. There’s no basis for this. Freedom of the press does not extend to individual — the White House is not required to let anybody who wants in there, in there! 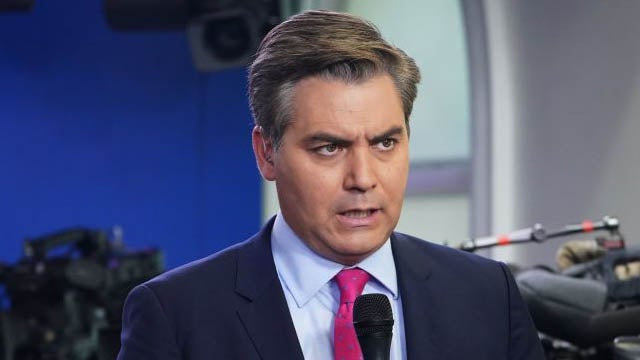 All he has to do is watch the White House feed of the daily press briefing where he has been denied. There’s no case whatsoever. This is simply a way to harass Trump and to keep Acosta and CNN front and center. Jim Acosta doesn’t even ask questions. Jim Acosta is an embarrassment, when you get right down to it. But within the press corps, everybody there is, of course, circling the wagons and supporting him, as though he has a personal constitutional right to be admitted into the White House pressroom with a press pass.

Any time leftists can play the role of aggrieved victim, they do it. That’s as good as it gets, and Jim Acosta has made himself out to be the biggest victim of Trump in the past three or four days. CNN is suing, it’s an absurd suit, and they know it. What CNN’s really doing is resisting. They’re protesting. And they’re doing it under the auspices of a lawsuit. That’s how I see it. And I don’t think there’s any alternative way of looking at this.

Here’s who’s been sued, by the way. Sarah Sanders, White House chief of staff John Kelly, Deputy Chief of Staff for Communications, Bill Shine, Secret Service director, Randolph Alles. How would you pronounce that? Alles? They’re included in the suit. The Secret Service officer who yanked Acosta’s pass is also included, although he’s not identified by name.

I think this guy is just a petty, childish baby. I think Jim Acosta is just a first-class A-number-one creep. He is completely and totally unlikable. And it’s obvious what his intentions are. If there ought to be a lawsuit, it ought to be that White House intern — I think she was an intern — suing Acosta. 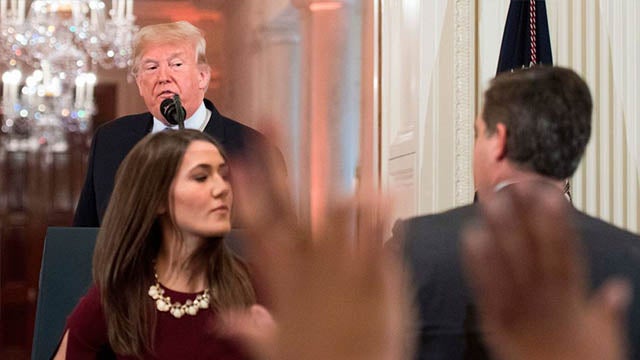 But CNN alleges in its legal action, which has been filed in district court in Washington, that Acosta’s First and Fifth Amendment rights are being violated in the ban. Really, see? I didn’t know that the First and Fifth Amendments gave anybody the right to attend a White House briefing. Can any of us go? “Well, no, Mr. Limbaugh, because we’re not journalists.” Oh! Oh. Well, who decides who the journalist is? CNN decides they only hire journalists? Who decides who a journalist is? Is that the criteria for getting into the White House press briefing?

Maybe I should start trying to go every day, bring in all my rowdy friends. What’s to stop me? If there’s a constitutional right to attend. You see how ridiculous this is? This is frivolous. It’s actually nothing more than harassment.