RUSH: You know, ladies and gentlemen, it wasn’t that long ago. You may remember this. When, I say “not that long,” it was at least 20 years ago, and you will remember this. Those of you who were with us then will remember that all of a sudden teachers in public school, middle school, high school, had to stop using red markers to grade papers because the red intimated the students. It made them nervous. Red was a color that denoted problems, emergency.

“You’re wrong! You’ve done something illegal.” So they had to stop using red. Well, now the little helpless tarts and snowflakes have made an additional demand, and this one is in academe. “University lecturers have been told not to use words in capital letters when setting assignments because it might frighten students into failure.” This is a journalism school in England I’m talking about here, and the teachers at this journalism school have been instructed not to use all caps. It’s too intimidating. 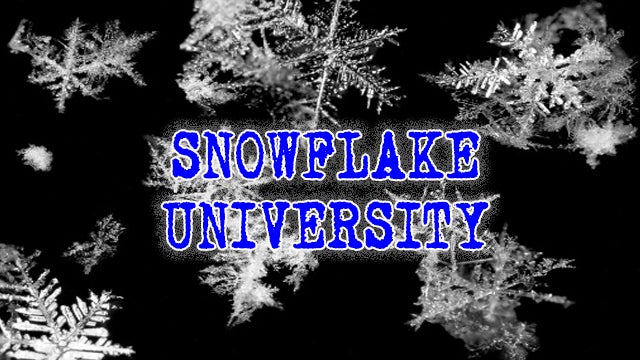 It’s too scary, and it makes the students feel like they’re being yelled at. “Staff at Leeds Trinity’s school of journalism have also been told to ‘write in a helpful, warm tone, avoiding officious language and negative instructions.'” That is a quote from the guidebook. This is from the Express newspaper in the U.K. “Staff at Leeds Trinity’s school of journalism” cannot use all caps. It’s too scary. It intimidates; it frightens. The students think they’re being yelled at.

Lecturers “have also been told to ‘write in a helpful, warm tone, avoiding officious language and negative instructions.’ Some blasted the move as ‘more academic mollycoddling’ of the snowflake generation. An ‘enhancing student understanding, engagement and achievement’ memo lists dos and don’ts — with ‘do’ and ‘don’t’ among words frowned upon.” In other words, you’re not supposed to even use those words.

“Course leaders say capitalizing a word could emphasize ‘the difficulty or high-stakes nature of the task.'” So they have been instructed to “avoid using capital letters for emphasis and ‘the overuse of “do”…'” Don’t use that. That’s too commanding. It’s like issuing orders! They are especially instructed not to use the word “DON’T.” It’s too punitive. It’s too authoritarian. (The inmates are running the asylum.) First, you can’t grade papers in red because that scares the little kids, and now all caps cannot be used because it makes the little kids think they’re being yelled at.