RUSH: I have a story I want to share with you from one of my tech blogs. I should tell you in setting this up, Bill Nye the Science Guy is considered a hero among Millennial tech people. Now, Bill Nye… He’s the scrawny little dude that wears bow ties. He wears a white lab coat everywhere he goes, and he has a feature on PBS where he explains, you know, why water evaporates and why water runs downhill, things like that, and he’s consider a great “scientist.

Bill Nye the Science Guy. He explains common, ordinary, everyday scientific things. But he’s not a scientist. He’s an actor. He’s got training in the performance arts. He’s not a scientist. But Millennials think that he is. Millennials think that Bill Nye the Science Guy is as accredited a scientist as there is for any other physicist in the world, and he’s ticked them off. Another thing I gotta tell you… You gotta trust me on this. I know you don’t read these guys like I do. 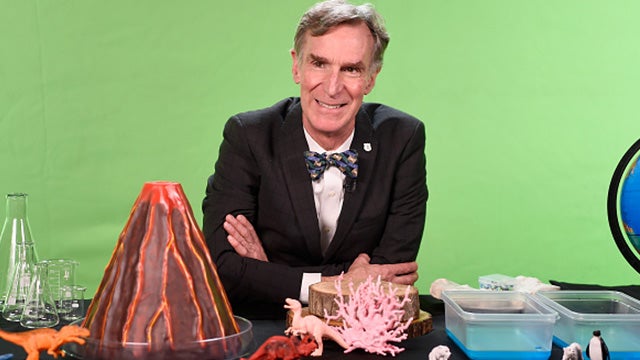 These people all believe that we’re gonna have to go live on Mars if humanity is to survive because of climate change on earth — and they literally believe that it’s possible. You know, Bill Gates talks about it, that means it can be done. Elon Musk says he’s gonna develop Mars and these people think it’s gonna happen, and they believe it. They all believe it. I’ve never seen a bunch of more apocalyptic people. What is that vampire show or that zombie show?

The Walking Dead? That’s what they think the country is, a bunch of zombies. The Walking Dead. The zombies are the Republicans, and they’re out eating everybody, and trying to take over everybody, and we can only escape and survive by going to Mars or by colonizing an asteroid that might be flying by, or maybe the Moon. They really believe this stuff, folks! I’m not just making it up. They’ve been scared to death that the planet can’t support them, within 40 years or 30 when they hit 65.

Anyway, I have a story from one of the tech blogs, and the headline: “Bill Nye the Buzzkill Guy Says We’ll Never Live on Mars,” and this blogger is livid. Bill Nye — maybe for the first time in his career as a so-called scientist — has told somebody something that’s actually true, and now these young tech bloggers are outraged. Let me read a little bit of this to you. To me, it’s important. This is what we’re up against. We’re up against this kind of mal-education, un-education, propagandizing, indoctrination.

Young people who are journalists and who are writing about how Apple sucks and the iPhone sucks and all of that, are the same people that believe we only have one hope and that’s getting to Mars. And that it’s gonna be done within the next 10 to 15 years because Elon Musk says so, and along comes Bill Nye to put the kibosh on it. “If you’ve been paying attention to any kind of space news over the past few years, you already know that the race to Mars is heating up in a big way.

“Elon Musk and SpaceX regularly talk about the possibilities of not only traveling to the Red Planet, but actually making it livable for humans, and NASA is slowly piecing together plans for the very first manned missions to [Mars]. It’s an exciting time… as long as you’re not Bill Nye, apparently. In a recent interview with USA Today, the longtime [science guy] shot down dreams of humans on Mars in intense fashion.

“In a recent interview with USA Today the longtime science guy shot down dreams of humans on Mars in intense fashion. Nye told USA Today[,] ‘We can’t even take care of this planet where we live, and we’re perfectly suited for it, let alone another planet.'” The tech blogger says, “I mean, he does have a point there. We humans are essentially suffocating our home planet…” (laughing) He’s got one point, that we are suffocating earth, not that we can’t get to Mars. No, that’s absurd. That’s crazy. Nye is wrong. But he’s right that we’re “suffocating our home planet.”

We’re not suffocating our home planet. We’re not choking it. We’re not killing it. We couldn’t. We could launch every nuke missile we’ve got, we could detonate every nuclear missile we have and we would not destroy this planet. (Snort!) This is 6-year-old Common Sense 101, but these people… “We humans are essentially suffocating our home planet, and while there’s a lot of concern over the sustainability of the path we’re on, the vast majority of people seem content to roll the dice and hope future generations find a way to fix what we’ve ruined.”

You know, we laugh at it, properly so. But it’s kind of really disappointing that we’ve got young people with this apocalyptic version of the here and now and the future, when they live at a time where life — standards of living — has never been higher. It’s never been better. The earth has never been cleaner. The air and the water are constantly improving because these are programs we’ve all instituted in the name of self-preservation and increasing the standard of living, and yet look what these dunces believe.

“However, Nye’s criticism of Mars habitation goes beyond our inability to clean up our act on Earth. He also had a few things to say about how difficult it would be to make Mars a comfortable place for life.” Now, this only has an impact if you actually were believing we could get to Mars, colonize it, and basically transmit a whole country of people there. Bill Nye is quoted as saying, “Nobody’s gonna go settle on Mars to raise a family and have generations of Martians.

“It’s not reasonable because it’s so cold. And there is hardly any water. There’s absolutely no food, and the big thing, I just remind these guys, there’s nothing to breathe.” The blogger says, “That’s all true.” He guesses the plans for “Mars really don’t have an answer for how we’ll find the things we so desperately need to sustain ourselves.

“Yes, recent research has shown that Mars soil might be just enough to do a bit of farming in, but that’s just one piece of a massive puzzle that we haven’t even begun to solve,” and he goes on again rip into Bill Nye for ripping people’s hearts out. It’s not satire. It’s genuine. Colonizing Mars. (interruption) No, no, no. I just… You know what? Maybe I shouldn’t care.

If a certain segment of population, youth or otherwise, wants to totally run around and be brain-dead stupid, fine. Leave ’em to it. I just actually believe that it’s one heck of a resource to waste, the corruption and pollution of all these young minds, ’cause these kids are gonna grow up someday, and they’re a bunch of Alexandria Ocasio-Cortezes out there that are gonna be in leadership positions someday, and we are in heap big doo-doo if that happens.