RUSH: Bob McNair, the owner of the Houston Texans, passed away on Friday, I believe. I only met him one time on the golf course. I didn’t know him at all. He had been battling melanoma and I think leukemia for 20 years. Two or three years ago they thought that he had gone into remission and was cancer free. But he succumbed to the disease. He was 81.

He was a genuinely self-made guy. He was born in Tampa and arrived in Houston with 700 bucks in his pocket. This is a true story. He got to Houston during a day they were having like a celebration of Houston a hundred years ago. He got to Houston and there were covered wagons and horses in the streets. And he thought, my God, he called his wife and said, “I don’t know if this is the place for us, Honey. I don’t see any cars here.” He had literally shown up during a rodeo week. 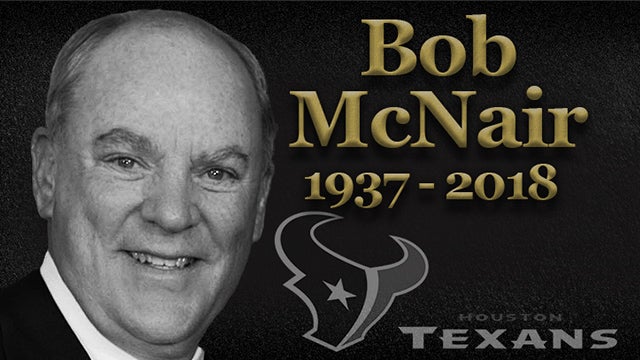 Anyway, he went on to lose a lot of money in the trucking business, make a lot of money in other businesses. And, ironically, his fortune came, he created a company called Cogen, which basically found power plants around the country and combined their output that he controlled, and he sold them for a billion and a half dollars to Enron when Enron still had a billion and a half dollars. And he used $700 million of that to buy the Houston Texans. This is after Bud Adams had moved the Oilers off Houston for Tennessee ’cause he couldn’t get a new stadium built.

The guy was one of the great philanthropists of the city. He brought the National Football League back to Houston after the Oilers left for Tennessee. He was not a bad guy. He was not a flamboyant personality. He did not make everything about him. He didn’t run around hoping that everything revolved around him. He was just a guy that was born to nothing and made his fortune and lost the fortune. He’s a self-made guy. And he happened to be a conservative. And so that’s what was noted in local obituaries in Houston.

A local CBS affiliate thought it appropriate to itemize his latest political contributions while speaking of his death. When big-time Democrats die, do you see obituaries of all the left-wing causes they donated to as though there’s something suspicious about it? I mean, I’m talking legitimate snark here, legitimate snark, simply because he donated to Republican and conservative causes. And that’s all they wanted people to know about him. People who didn’t know much about Bob McNair, that’s all the local Houston media wanted people to know about.

Now, why would that be? Well, when you know who runs the media and when you know what the objective of the media is, the answer kind of explains itself. This is despite the fact the African-American mayor of Houston lionized McNair, praised him to the hilt. He was born in South Carolina, by the way. Anyway, it’s just an indication of where we are. You know, the partisan divide in this country is such that a great man who did a lot for his city is demonized at his death simply because he was a friend of George H. W. Bush, donated to Republican causes. He was a big golfer, by the way, too.