RUSH: Also, the situation at the border, illegal immigration. The president openly talking about his comfort with a government shutdown if we don’t get the wall. Democrats are having a cow over this.

Marco Rubio steps up and has the guts to tell everybody what this caravan movement is really all about. It was a giant test of the resolve of the United States and the Trump administration to hold firm on the border. There’s no question that’s what it was. The people doing the testing, international leftists all the way down to Honduras and Mexico and American leftists joining together. There’s no question that Rubio is right about this.

RUSH: Here is Dave in Monument, Colorado. Great to have you, sir. Glad you called. Hi.

CALLER: Such an honor. You are such a great American. I’ll get right to my point. I’m as frustrated as you are with this lack of doing anything in the government. We were told we needed the House. We were told we needed the Senate. We were told we needed the president. We’ve got it. RINO Ryan has done nothing but block this great president for two years. You know, the Democrats, the communists were able to get Obamacare passed in a lame-duck session. And here we have all three branches of government, and we can’t fund the border wall, we can’t defund Planned Parenthood, we can’t get judges through, we can’t get anything done. We can’t even get an investigation into all of the treasonous activities that happened under the Obama administration. So my question is, how long do we have to wait?

RUSH: Yeah, I know. The problem, as you lay it out, is the Republican Party isn’t unifying. RINOs like McCain, Corker, Flake and others that just are, to this day, still opposed to Trump and don’t want him to succeed.

RUSH: Here’s Susan in New York City as we head back to the phones. Great to have you with us. How are you? 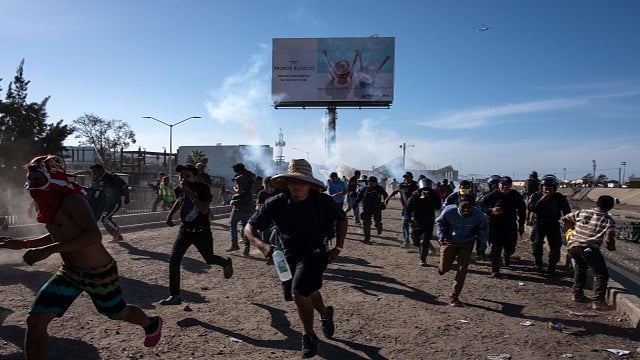 RUSH: Hey, it’s cold here too. It got down to 40 degrees here last night. This is the earliest onset of winter anybody can ever remember — two days after Trump’s global warming report comes out!

CALLER: For sure. Well, the parodies on the phone during the wait time have given me a chuckle and made the wait painless. I wanted to just get your perspective on what’s been going on at the border, specifically I’m getting the sense from just friends I’ve talked to and the buzz that I hear that really we’re at a crossroads here. And if the president doesn’t really do several things along the lines of potentially an executive order on the anchor babies and the birthright citizenship and ending chain migration and implementing E-Verify, all of which I know can be overturned in the next presidency, he’s not gonna have a shot in hell of getting reelected in two years. It’s just way over the top. Even Mexican television, ’cause I’m bilingual, there’s a show called (unintelligible) was touting how vile the folks were that were really clashing with Mexican police at the Guatemalan-Mexican border.

CALLER: And nobody here knows that.

RUSH: We all know this. We all know that this caravan… Marco Rubio had the guts to call out exactly what is going on here. Our immigration system is being tested by the worldwide left with this invasion just to see the mettle of Trump and the United States in repelling it and doing something about it. There’s no question that that’s right. You said that you’re talking to other Trump supporters who are starting to share with you these fears that if he doesn’t do something notable —

RUSH: — pretty quickly, that he’s gonna be in danger for reelection in 2020?

CALLER: Absolutely. People are getting really fed up. And they’re feeling that something’s not right because we all know the circuit court judges in California are super leftists, right?

CALLER: But he’s the president of the United States. Let them sue him. Let them sue him. They’re not gonna have standing. Most of the border is with Texas, and isn’t 90% of the border between Texas and Mexico private owned land? What the heck are they gonna sue? I mean, private owners can do whatever they want. I mean, the wall alone won’t do it, but if you put a three-, four-prong approach, it’s gonna stem it.

RUSH: Well, there’s an interesting little story I have in the Stack today. There is a portion of a new wall that exists I think the California-Mexico border. And the story is that this new wall is actually impossible for the invaders to get over. In other words, it’s working. It’s just a small portion almost like a prototype, but it has been deployed. I appreciate the call. I think there’s something going on out there. She is a Trump supporter. She’s talking to other Trump supporters, and it’s understandable there would be some — I don’t know what — trepidation.

It’s been two years. There isn’t a wall, and now we’re talking about shutting down the government in order to get a wall built. We all know that most Republicans don’t want a wall. We know that no Democrats want a wall. We know that that hasn’t changed. We know that the president does not have a unified party behind him on any of this. It is seen by people who elected him that that shouldn’t stop him, that he uniquely — and that’s why he was elected — has the ability to get this done even withstanding this opposition that he faces.

I understand the concern, because this is why he was elected, and people really did believe that he was going to do something about it. I’ll tell you, the pressure that is being exerted on the public is intense. For example, you remember yesterday I had a story from Breitbart that featured projections based on current data. It said that if current levels of illegal immigration continue, that next year 600,000 illegals will succeed in crossing the border and get into the country and not be deported.

It’s been, I think since 2007, that we had a number that high with 705,000. Now, that story came from Breitbart, which journalistically is a Trump ally. And last night I’m working, doing show prep, and I come across The Pew Research Center for the People & the Press study which says that illegal immigration is plummeting, that the numbers of people succeeding in crossing the border illegally is really, really dwindling. And I said, “Wait a minute. These both cannot be true.”

On the one hand, if we don’t do anything, next year’s number is gonna be 600,000 illegals, and add to that number everybody they can eventually bring with ’em via chain migration and the like, anchor babies and the kids they will be birthing after they get here. So that 600,000 number is actually far more than that in the ensuing years. Then Pew comes out with the story later in the day, “No, no, no, no. No, no, no. Illegal immigration is dwindling.” So I look at these two, and I say which of these two happens to be true? Because they both can’t be.

And I have to conclude that the Pew Center numbers, much as I wish this wasn’t the case, I wish the Pew numbers were right. I wish illegal immigration was plummeting. I wish that the numbers of people willingly trying to break the law were plummeting and declining. I just don’t think it’s the case. And I think that Pew and CNN and ABC, CBS, NBC, they’re all part of the Drive-By Media cabal. I think they are trying to pressure people into believing a wall isn’t necessary!

So I’m saying if you see news how illegal immigration’s really, really plummeting, it’s gonna be tempting to believe it to give Trump credit, ’cause everybody wants to give Trump credit where it’s deserved and earned. But what you’re supposed to conclude, if you agree that illegal immigration’s declining, “Hey, maybe we don’t need the wall. Yeah.”

RUSH: Looky there! Right on cue, there is CNN reporting on the Pew information, the survey that I reported earlier today that immigration is “declining rapidly.” They don’t say this, but the conclusion is, “We don’t need no stinkin’ wall!” CNN can’t wait. They’ve got somebody in Tijuana showing nobody trying to cross a wall right now as evidence that Pew is right. “The numbers of people attempting to get into the country is a new low,” they’re reporting. Don’t buy it. There’s other data that suggests it isn’t true. It’s all timed to try to convince people we don’t need a wall.