Remember Rosenstein: No Vote Counts or Election Results Were Changed

RUSH: Mike in Canton, North Carolina. Great to have you with us on the EIB Network. How are you doing, sir.

RUSH: Oh, great to have you with us, sir.

CALLER: Listen, the thing that you veered into — and I heard it about a week ago, and then I’ve heard you talk kind of on the sides of it. But what bothers me is that you’re the only person out there pushing back on the fact that there was no Russian interference on Election Day 2016. It’s always presented as “Russian interference in the election,” but it’s not. It’s actually Russian disinformation during the campaign, which had a minor effect. Even the president or Sarah Huckabee Sanders or anybody else that’s out there speaking trying to push back, doesn’t say, “Hey! Okay, Jim Acosta, what happened on Election Day 2016 that the Russians did that changed the outcome of the election?”

RUSH: (impression) “Well, no, they can’t do that because that’s what Mueller’s investigating and that you’re trying to impede. Robert Mueller’s trying to find out what the Russians did in the election.” No, no. Not the way to go about it. The way to go about it is to quote Rosenstein! When Mueller announced indictments… I’m trying to dial this back, folks, but I’m just… I’m so worked up over this.

You remember when Mueller announced the latest indictments (it’s months ago now) of some Russian trolls who were trolling Facebook after the election? When those indictments were announced — and it’s never been publicized, it’s never been amplified except by me! Rosenstein in his press conference said (summarized): “Do not be mistaken. Nothing in these indictments today suggests any American did anything wrong.

“And nothing in these indictments today or any of the indictments to date indicates that votes were changed or that election results were altered!” We don’t need to push back! We just need to quote Rosenstein, which nobody is doing! He said it! On the day — the last day — Mueller announced indictments of Russian trolls who are never gonna see the inside of a courtroom. Well, except for one group that wants to. They’ve already admitted it. And yet it’s been totally ignored.

RUSH: I went back. I just ordered the Rosenstein story to be put at the top of RushLimbaugh.com on our ticker. It’s gonna look like breaking news, and I’m ordering it up. We’ve got the sound bite. We’ve got the audio of Rosenstein saying what I just said, and we’re diggin’ that out of the archives.

RUSH: Okay. Here we go. We’re gonna go back here to July the 13th in Washington at the Department of Politicized Justice where we have the deputy attorney general, Rod Rosenstein, holding a press conference to talk about the indictments of 12 Russians for hacking the Democrat National Committee in 2016.

Now, it might serve as a great reminder here that hacking is what supposedly this was all about from the get-go, correct? That the Russians were hacking all these various Democrat institutions and places for the purposes of sabotaging their presidential election effort so as to make sure Donald Trump got elected because he was a puppet of Vladimir Putin, and Vladimir Putin hated Hillary Clinton because she’s so competent and so smart and so good. It was tough to stomach then. It’s impossible to stomach now.

So Mueller had to show something along these lines, so he indicts a bunch of Russian trolls that were indeed — they didn’t hack things. They were messing around on Facebook and making phony ad buys. So Mueller and his team indict a bunch of people in Russia with whom we got no extradition treaty, who Mueller knows are never going to see the inside of a courtroom, that his charges are never gonna be tested because these Russians aren’t gonna show up and defend themselves. Mueller knows this.

These indictments were pure PR. They were never intended to be tested. Except one of these outfits, they showed up. They showed up. They got an American law firm as their legal representation. They showed up, and they pled not guilty! They wanted to plead not guilty. And Mueller said (imitating Mueller), “Wuh wuh wuh you can’t, you can’t, you can’t show up here. Why, you have not been properly served.” Mueller had not even served them with the indictments. He just announced them because there was never anything to them!

Then Mueller tried to get the judge to delay this because, “Judge, we can’t continue. We can’t try this case because these people are still doing it!” Really? So you can’t indict the mafia and you can’t prosecute ’em ’cause they’re still doing it?

Folks, this has been a joke, it has been an insult to all of our intelligence from the very get-go. And again, it’s nothing but a pure political operation to get rid of Donald Trump and to discount your votes for him, done under the rubric of the Justice Department to make it look like there’s no politics here. No, no, no, no, no. This is clean and pure as the wind-driven snow. This is pure justice. This is law and order. Bohunk! It is none of that! And the evidence is everywhere to prove that, including these indictments of these invisible Russians for hacking.

They’ll never be tried. Mueller doesn’t want to try them because he doesn’t have any evidence on ’em! These are just PR indictments so that Mueller and his sycophants in the media can say, “Look. This guy’s really been on the case. There’s nobody better this Mueller guy. He found the Russians that were doing the hacking, right?” Well, where are the allegations in court? Where are the trials? Where are the convictions? And where’s the evidence? There isn’t any of that.

This is no different than Barack Obama calling a press conference, “Hey, my team found the Russians have been hacking the election. I told them to stop it and they stopped it and it’s done, but we’re not gonna proceed any further because I told ’em to stop and they did. I told Putin to cut it out.” No different than if that had been the case here. Anyway in announcing these indictments, I want you to listen to Rosenstein back on July 13th.

RUSH: We don’t have to have Sarah Sanders or Trump push back on it. We just need to get this little sound bite here and loop the damn thing. Whenever they ask anybody about it, just play this and then ask, what the hell are we doing here? What have these two years been about? Because I’ll guaran-damn-tee you, the YouGov and Economist poll says over 60% of Democrats think the Russians tampered with the votes; 42% of the American people think that happened. Here’s Rosenstein. Playing play again, Sam.

RUSH: Rod Rosenstein, deputy attorney general, July 13th, when Mueller has announced the indictment of a bunch of nameless, faceless Russians for supposedly hacking something. Play it again.

RUSH: Why did they bother to throw that in, by the way? Why did Rosenstein think it was necessary to point that out? “By the way, there’s no allegation that the conspiracy changed the vote count or affected any election result.” Well, isn’t that what this has supposedly all been about? Isn’t it the case that the media and Mueller and the Hillary campaign have all tried to make the American people think that exactly that happened, that vote counts were changed! And that the election result was altered. And isn’t that the reason Mueller has been doing his so-called investigation.

Damn straight it is! Rosenstein threw this in at the very last of his little press conference. He’s not got a single question about it. He tossed it in there at the very end as though it was an afterthought. He had to say it. He had to get it out there, but nobody amplified it, nobody promoted it, nobody made it bigger than that. And it’s everything to me. But I’m just a neophyte guy on the radio. But I’m telling you, to me, this is everything.

I’m not a lawyer, I’m not a veteran of the DOJ. I don’t have untold respect for what they do there simply because I have untold respect for what they do. They’re just as culpable and capable of corruption as anybody else in this government is, as far as I’m concerned. So when somebody at the DOJ says, “Oh, by the way, there’s no allegation that this changed the vote or affected the election,” to me that’s ball game! That’s what this has all been about!

So now we step forward to today where Mueller wants us to believe he’s got the goods on Trump because Michael Cohen, an impeccable example of integrity and honesty himself, has flipped again! Like every other Mueller witness is a liar! Every Mueller witness at one time or another is a liar, according to Mueller himself!

And we’re being told, “Well, you can believe what they say now because I, Robert Mueller, am telling them to tell the truth.” Yeah, what happens if they don’t tell the truth after? “Well, then they’re ruined, and I point to Michael Flynn and I point to Manafort so, yeah, they’ll tell me what I want to hear.” That’s what we’re dealing with here. Play it again. I want people to hear this again. 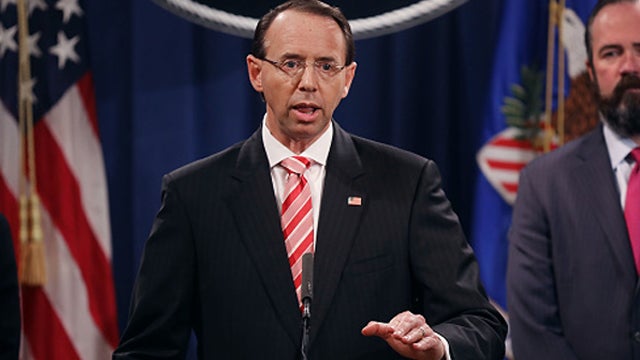 RUSH: What about the meeting at Trump Tower? Don Jr., Jared Kushner, Trump did or didn’t know, what about that? Did that change the vote count? Did that alter any election result? No. And nobody is gonna allege that it did. What they’re gonna allege is that Donald Trump is scum and deserves not to be president and ought to be impeached. That’s what they’re gonna allege. And as I said a moment ago, of all the things Trump has ever been accused of, this is probably the thing he is most innocent of in his life. Play it again and then the stinger and then go to the break.