RUSH: Now, I want to move to what’s happening in France. Have you seen at all in the last week any video out of France, what’s happening over there? Just a few seconds, huh? Here’s the thing about this. Isn’t Europe utopia? Isn’t Europe showing us the way? Don’t our elites tell us that our future is emulating Europe, from trains to climate change to immigration, the Europeans are doing it right. The Europeans have got it down pat, right?

Well, in this case, the Europeans, the French, are doing exactly what the global climate change political movement wants done! This young little whippersnapper president has put a massive tax on carbon, which has driven the price of gasoline to over seven bucks a gone. Now, they want you to believe, to the extent that they’re reporting this, that interestingly the media wants you to believe, that it’s extreme leftists that are wearing the yellow vests and are protesting. That’s not who’s protesting.

You know who’s protesting in France? The middle class. You may not know this. They’re sometimes called the yellow vest crowd. The reason is, in France, you are required to have a yellow vest in your car in case your car has a breakdown or an accident, you’re to put that on so that you’re seen at night by emergency personnel or others. It’s for your safety. So everybody’s wearing the yellow vest.

It’s the middle class, and they’re protesting over climate change! They’re protesting this carbon tax, which is exactly what the worldwide left wants to happen in the United States. They’re protesting this massive increase in the price of gasoline. And it is the worst protests that have taken place in Paris in all of France since 1968. It is devastating. And it’s happening in the elite sections like near the Champs-Elysees.

And it’s got this new French president totally nonplussed because he thought this was the route to instant love, to instance popularity. Why, everybody believes in climate change. Everybody wants to save the planet, everybody hates fossil fuels, everybody hates pollution, everybody this, everybody that. This young, impressionable little guy has been led to the trough by a bunch of worldwide leftists, and he’s bought hook, line, and sinker this literal bilge and drivel that they’ve been teaching him.

So he slaps this massive tax, and now he’s got the middle class in his country revolting. Boston had its problems with tea, the French are having problems with gasoline. I think energy prices are probably more important to people than tea. Now, this is gonna be an interesting winter in Paris. And I hope it doesn’t get too cold because a lot of people use fossil fuels to heat their homes. And when people can’t afford to heat their homes as well as drive their cars, they tend to get grouchy.

You know, I’m wondering why this is isn’t a bigger story in the Drive-By Media. Riots in utopian Europe over fuel taxes. Yeah, yeah, don’t let that become a thing. See, fuel taxes like this are part and parcel of saving the planet. Fuel taxes, carbon tax, gasoline prices way over seven bucks. That’s what we have to do, folks, to save the planet. That’s what these global climate change, global warming people are after.

You’re seeing it in Paris. This is exactly what they want. This is what it’s gonna take to save the planet if what they say is true, which it isn’t. Man is not responsible for climate change. And gasoline and fossil fuels aren’t the reason why temperatures raise and lower and climate change creating greenhouse gases. None of this is fact. It’s all nothing but computer models. There is none, zero empirical evidence for any of the allegations they’re making.

So this little guy cannot create his own utopia. It’s the exact opposite. I’m telling you, France is enduring the worst protests — these are riots — since the student protests of May 1968. The American media is doing its best to downplay all of this because the current rioters are protesting tax increases Macron has put on gas and diesel to fight climate change. He has been specific as to why the carbon tax is in place: to fight climate change.

“Stunned Parisians Clean Up Posh Central District After Worst Riots Since 1968.” You know what’s been overheard in some of the cheering over there? I kid you not. I know friends who are there. There are some people wearing the yellow vests chanting, “We want Trump” among the rioters in Paris. “We want Trump.” Europe. It’s supposed to be, oh, my God. Europe is utopia. Europe is the way. Europe is showing us how to live. Bohunk to that.

At the G20 in a related story in the TheHill.com. “G-20 Leaders Agree On Trade, Trump Bucks Others On Climate.” There may never be — I hope I’m wrong about this — there may never be another president with the guts to stand athwart all of these various hysterias that the left creates. This particular climate change hysteria inspired by a desire to seize control of the energy sector is the same kind of hysteria that inspired the desire to seize control of the health care industry.

You control people’s health care and the energy supply, and you own them. And it is no mystery why the worldwide left is producing and promoting virtual communism here. Because that’s really what’s going on. All of these protests in this country, around the world, the caravan, you name it, everything aimed as a protest in this country is sponsored by Marxists and communists somewhere, and the worldwide global left is nothing but a bunch of communists. And they want control, and they are doing their best to seize it.

So what this was about… These nations at the G20, you know what they did?  They reaffirmed their support for the Paris accords.  Let me tell you one more time.  The Paris accords are nonbinding.  The Paris accords are pure PR.  It’s simply every nation agreeing to try to limit CO2 emissions over the next, what, 10, 20 years.  It’s just a promise.  It’s a pledge.  Nobody’s committed to it.  Nobody is gonna be held accountable to it.  There is no missing it and paying or suffering any kind of penalty.

It’s just nothing but a bunch of people saying, “Yeah, okay, we’ll try.  We’ll try to limit our CO2 emissions by X in the next 20 years.”  They’re all signing it because it’s nothing more than a PR enterprise.  It just allows people to leave the meeting and say, “Yes, I’ve committed to trying to limit the CO2 emissions of our little country here by X-amount over the next 20 years.” (clapping) “Yaaaay! You’re trying! You’re working on it!”   But nobody’s committing to doing it because it can’t be done.  Trump is saying he’s not gonna play the game.

He’s not going to sign this latest attempt, and he’s been joined by somebody.  It’s so great when somebody else has the courage to get on board.  In this case, it is “the newly appointed foreign minister [of Brazil], Ernesto Frago Araujo, who starts his new job in January under President Jair Bolsonaro.” This foreign minister “has stated that the climate change issue was invented by ‘cultural Marxists’ to help push a globalist agenda that is anti-growth and anti-Christian, reported The Guardian and the Daily Mail.  He went further.

We have people attempting to criminalize certain aspects of support for various policy.  I don’t think it has to necessarily be a ChiCom Marxist hoax.  You don’t need to geographically locate it.  It’s just a Marxist hoax.  It’s a Marxist ploy.  Like I say, folks, the reason I spend so much time on this is because climate change, the issue, has virtually every ingredient and every technique the left uses to impose or sell or accomplish any of their objectives. And if we could succeed in educating and informing people how the left is using climate change, then we could inform and educate people on how the left is doing everything.

‘Cause I’m telling you, this issue has virtually every philosophy, every technique, every strategy that the left uses to succeed.  It’s not true of health care.  It’s not true of some of the other things the left is constantly pushing, but climate change has everything.  It has the guilt of the citizenry.  It has the potential for redemption.  It has the supposed benevolence of government, and it has an objective: Saving lives, saving the planet.  Who could be opposed to that?  Who is in favor of destroying the planet?  Well, if you listen to these people Republicans are.

RUSH: This is Kim in Los Angeles.  Great to have you on the program.  Hi.

CALLER:  My husband also patrolled the no-fly zone, and he had a lot of respect for President Bush. But he did say that he didn’t have much… He wasn’t very impressed by Saddam’s army, and he didn’t think it would have been much to get in there and kind of finish up the job. 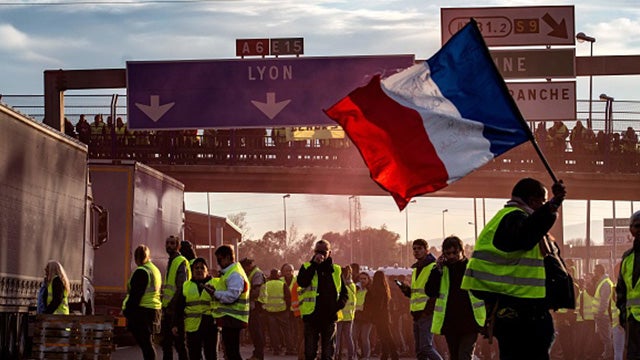 RUSH:  Oh, there’s no question that that’s true.  He’s exactly right.  Saddam’s army was on the verge of mutiny anyway.  I mean, they were begging to surrender and waving the white cloth within hours of the attack.

CALLER:  I remember that.  The reason I called was to tell you, this morning I was watching Fox News and getting my daughter ready for school, and they showed something about the riots in France.  We’d been to France and we were kind of interested in that and so we turned around to look and they had all the billowy smoke and everything.  And then on one of the walls they had graffiti that said something like, “Down with capitalism” or “Fight capitalism,” and it was in English.

I looked at my daughter and said, “How many places have you been where there’s graffiti written, you know, in perfect English in a foreign country?”  I said, “Does that ring true to you?” and then my poor daughter got our typical morning lecture.  It takes 30 minutes to get her to Catholic school every morning, so I try to correct everything we heard on TV, the news, and I tried to explain to her why, you know (chuckles), the news isn’t accurate.

So that was on top of the list.  But I heard you say that and I just thought of her. You talked about France.  I just said, “The people of France are not happy. They don’t want more liberalism.  They want more conservatism,” and so I just thought when I saw that. I thought, “They’re trying to tell us something that’s not accurate.” So you said that and I thought, “I’m gonna give him a call and tell him that.”

RUSH:  See, that’s the question, though.  The people of France, I don’t know if they’re looking at this as left versus right.  I wish they were.  I think they’re just seeing $7-a-gallon gasoline and saying, “Screw this!”  Now, if they’re then associating $7-a-gallon gasoline with left-wing politics, that would be great.  If they associate it climate change and how we fix that, it would be great.  Your graffiti? There’s no question somebody realized that cameras were gonna be there and just wrote something that the cameras would be attracted to that has nothing to do with what’s going on in France and these protests or riots.