Tillerson Couldn’t Keep Up with Trump

RUSH: Now, the Drive-By Media today is having a lot of fun with quotes from Rex Tillerson. Rex Tillerson, the former first secretary of state named by Donald Trump, he did an interview. It was at a benefit dinner for the M.D. Anderson Cancer Center in Houston. Bob Schieffer, formally Face the Nation, interviewed Tillerson for a — I don’t know what it was for. It might be Face the Nation.

Anyway, Tillerson unloaded on Trump, and so the Drive-Bys are beside themselves today reporting this. And I just want to tell you before you hear — we’ve got two bites. I just want to tell you this is exactly the kind of thing that was said about Ronald Reagan back in the 1980s. So the first question, at least in our sound bites here, Bob Schieffer says to Rex Tillerson, the former Exxon CEO, “You took over for Lee Raymond.” If there was ever a guy who looked like an Exxon CEO it would be Lee Raymond, and Tillerson a close second. Can you think of a better name for an oil company CEO than Rex Tillerson? At any rate, Bob Schieffer says, “How would you describe Donald Trump?”

TILLERSON: It was challenging for me coming from the disciplined, highly process oriented ExxonMobil corporation to go to work for a man who is pretty undisciplined, doesn’t like to read, doesn’t read briefing reports, doesn’t like to get into the details of a lot of things but rather just kind of says, “Look, this is what I believe. And you can try to convince me otherwise, but most of the time you’re not going to do that.” 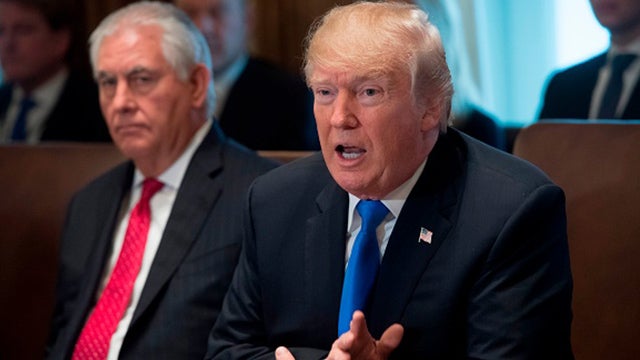 I would submit to you — you’ve heard the news today that the chief of staff, John Kelly, is resigning or being fired or some such thing. And one of the reasons given is that he’s exhausted. You know why he’s exhausted? It’s because nobody can keep up with Trump! You want to talk about discipline! The guy works on maximum four hours of sleep a night. The guy is never idle.

You want to talk about living a full life. There are a lot of people I’ve known who have lived what I would consider full lives. William F. Buckley was one. George H. W. Bush is another. There are many. And Donald Trump probably is at the top of that list. There simply isn’t anybody to keep up with him. And I think a lot of people in his administration who can’t keep up with him end up saying, “Well, the guy’s out of control, well, the guy’s undisciplined, well, he’s this or that.”

Donald Trump arrived, the way I hear this Tillerson sound bite, Trump arrives knowing what he wants to do. He doesn’t arrive unsure and he’s not gonna admit that who doesn’t know what to do because he’s not from this world. He’s there, and he has a specific agenda that everybody that elected him knows what it is: Make America Great Again.

Sadly, he hasn’t done a lot on that agenda. He hasn’t built the wall yet. We haven’t repealed and replaced Obamacare. There’s a lot of things in the Trump agenda that have not happened yet. But that’s not what Tillerson’s talking about. Tillerson’s talking about some guy comes in and says, “This is what I want to happen.” And your typical Washington bureaucrat or CEO bureaucrat will say, “Well, where’s the memo? Where’s the plan? Where’s the blueprint?”

“I don’t care what you — just make it happen.” Trump is one of these, this is how he’s worked, “make it happen.” If he’s talking to Jared, if he’s talking to Trump Jr. or Eric or Ivanka, “This is what I want, make it happen.” That’s not how Washington works. Washington works on things not happening. The whole point of bureaucracy is to not do such that it looks like you’re getting things done. There might not be any need for you after you finish. So everything’s never done. Of course Trump’s gonna have compatibility problems with that.

And as the CEO of Exxon there’s a board of directors there and Tillerson probably just can’t walk in the office every day and start telling people, “Do this, do that, I want you to do — wait a minute, the board says? I don’t care what the board says, do it.” You can’t do that. But Trump, that’s how he works. So I think being unable to keep up with him, and how old is Trump now, 71? 72? There isn’t anybody, I don’t care how young they are, there is nobody there that can keep up with him. I have no doubt that there are tons of people exhausted.

So the guy, he goes out, he has a day-long trip somewhere, campaign stop, two or three rallies, gets back to the White House at 10 o’clock and starts tweeting and probably is issuing orders to some of the staff there who had to wait all day ’til 10 o’clock for him to get back. He goes to the residence, does what he does, gets two or three hours sleep, gets up, starts tweeting and working at whatever, and he expects that when he needs something done, there’s gonna be somebody there to do it even if they’ve only had two or three to four hours sleep like he has. I submit to you that there aren’t very many people that can keep up with that and particularly in a series of bureaucracies.

But I know Tillerson has gone farther than that. Tillerson is saying here he doesn’t like to read, he doesn’t read briefing papers. It’s the same thing they said about Reagan. This is almost verbatim. Amiable dunce. “Yeah, Reagan’s lazy, Reagan falls asleep at cabinet meetings.” Remember that lie? “Reagan doesn’t even know what’s going on. Reagan is so distant, he doesn’t even care. As long as he got his tax cuts and the communists are going away, Reagan doesn’t care.”

But you talk to people that were serious in Reagan’s cabinet, you talk to William Bennett about whether Reagan’s lazy or doesn’t know what’s going on. Bennett was education secretary. It’s quite the opposite. So here comes he doesn’t read, he doesn’t read briefing reports, he doesn’t like to get into details of a lot of things. Trump is not a process guy, and Tillerson is. A lot of bureaucrats love the process. The process is more important than the result. The process is what says everything about you. The process, and how deeply intertwined in it you can get, that’s where you show how competent you are and how much you know.

Washington’s not a results town, sadly. And Trump is a results guy. He says, “Just get it done. You’re secretary of state, you tell ’em this.” Tillerson says: I couldn’t tell him that he was wrong. I couldn’t talk him out of it. He told me that I probably would fail trying to talk about –” Well, he was just with somebody very decisive. Bob Schieffer then said, “Well, how did your relationship with Trump go off the rails?”

TILLERSON: We did not have a common value system. When the president would say, “Here’s what I want to do and here’s how I want to do it,” and I’d have to say to him, “Well, Mr. President I understand what you want to do, but you can’t do it that way. It violates the law, it violates a treaty,” and I think he grew tired of me being the guy every day that told him, “You can’t do that and let’s talk about what we can do.”

RUSH: So he says that Trump didn’t care if what he wanted to do violated a treaty. Of course, Trump said in his campaign that one of the things he was gonna do was rip up some of these punitively, poorly written treaties that we had no business signing onto in the first place, like the Paris climate accords, which were not a treaty, I understand; they never got to that status. Trump’s now, by the way, tweeting that Macron is begging for Trump to embrace him and show him how to do things now. He says Macron’s a good guy. He realizes the mistake he made here. It’s funny.

I just don’t think very many people have — and Tillerson’s right; I think a lot of people have the ability to relate to the way somebody like Trump goes about his day and gets things done. And it’s very clear here that Trump is not in any way trying to comport to the way the establishment has always done things. Now, you might be saying, “Well, then why did he choose the guy, Rush?” Folks, I know. I’m telling you, if you go back and listen to this program from the early days of the campaign you will remember me saying that some of these staffing decisions puzzled the hell out of me.