RUSH: Okay. So Trump is gonna appoint William Barr to be the attorney general. I don’t know how anybody could oppose this guy. He worked for the Bushes, and as somebody who worked for the Bushes, William Barr is today a representative (Is he not?) of our perfect and wonderful bipartisan past that we’ve just spent the past two days hearing about in the Drive-By Media. Now, people I know say that Bill Barr would be excellent for this gig, that Trump couldn’t find anybody better. 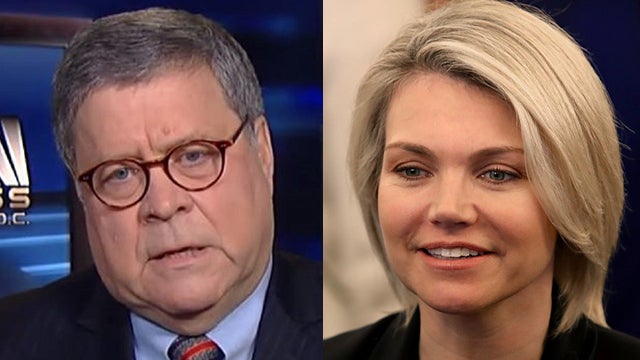 But the instinctive reaction on the left would be, “We can’t let Trump have the guy he wants!” Isn’t that what all of this has been about, actually, the Mueller investigation and then the pre-Mueller investigation? So if anybody objects to Bill Barr, you’ve gotta fire back, “Waaaaait a minute. He comes from our lost era of bipartisanship that was so wonderful that we just saw two days of remembrances of what it could be like.

“And how could you turn down somebody from that era?” And they’ll say, “Well, he didn’t work for 41. He worked for 43, and we weren’t talking about 43 — 43’s still what 43 has always been. But 41? Yeah, we have all kinds of respect for that guy!” Heather Nauert, who is the spokeswoman in the State Department, has been named the United Nations ambassador. The left is out of its mind that somebody from Fox News has been nominated to be a diplomat. (laughing)

RUSH: By the way, folks, I was teasing when I said that the left would be openly accepting of William Barr as Trump’s attorney general. (chuckles) That’s my point. They’re gonna do everything they can to oppose this nomination and to flavor it and color it as somebody that can’t be trusted. Even though Barr has long been approved by the Washington establishment, since he’s been nominated by Trump, they’re gonna go after him.

RUSH: I was joking about William Barr, Trump’s AG appointee. Here’s the details, the salient details about William Barr. The Democrats are complaining about him because Barr has spoken supportively of Trump in the past. William Barr was AG for Bush 43. But he has criticized Mueller. Mueller used to work for him in the Bush 41 DOJ. William Barr goes be back to Bush 41. Mueller worked for him then and he’s been critical of Mueller, and the reason he’s been critical of Mueller is for loading up his staff with all these anti-Trump Democrat lawyers.

But again, there’s a reigning theory that Mueller did that to give himself cover with the Drive-Bys and everybody when he ends up having no collusion with Russia. “It must be true if 15 Trump-hating lawyers couldn’t find any. It must be true.” That’s the theory behind this, one of the theories behind Mueller having these people. William Barr has also said that the Uranium One case involving the Clintons and Ukraine should be investigated. It hasn’t been. And he’s defended Trump’s authority to remove federal officials at will.

Rather, he has supported any president’s authority, which comes from the Constitution, to remove any federal official at will. The president is the lone repository of power — the presidency is the lone repository of power — in the executive branch. So if he wants to get rid of anybody, he can. Now, there are always ramifications, and that’s where politics comes into it. But the president can fire James Comey all he wants, and he doesn’t have to have a reason!

Now, if the Democrats want to say that’s obstruction and go in with special counsel with help of an anti-Trump member of his own DOJ, then they can do that, which is what happened. And, by the way, back in the Bush 43 days, William Barr, Democrats say, sounded more like Cheney side of the White House than the Bush side. He was in favor of detaining terrorists as enemy combatants and so forth. So he’s not gonna get the smooth ride that you would think based on the past couple days of Bush celebrations.

RUSH: Here’s what William Barr wrote. William Barr wrote — and, by the way, they’re reviving this all over the Drive-By Media to show somehow that William Barr could not, should not be Trump’s AG because he has shown bias against Mueller and against Comey. What William Barr said after Trump fired Comey… Barr wrote and said that there wasn’t a person in the Department of Justice that he knew that was not outraged by what Comey did in his July 5th press conference exonerating Hillary Clinton.

He said everybody in the DOJ worth their salt knows the violation and the usurpation in power that Comey engaged in by basically taking over the role of Loretta Lynch who had DQ’d herself, essentially, by having met with Bill Clinton on the tarmac in Phoenix while supposedly the FBI was looking into his wife’s email plan and her illegal server. Bill Barr said that what everybody was saying, that Comey had no right to determine who gets charged and who doesn’t, and there’s Comey with that July 5th press conference.

He details all of Hillary Clinton’s crimes and then says there’s “no reasonable prosecutor” who would ever bring these charges, and so we’re not going to. Barr pointed out that anybody worth their salt, that knows the Constitution, knows full well how Comey overstepped. That it wasn’t his purview to determine who gets charged. Not only that, it is totally against FBI regulations to list charges against people that you’re not gonna pursue! If anybody’s innocent, you do not sully them by telling everybody why you almost went after them.

Everything Comey did in that press conference was illegal, unethical, or unconstitutional. So all Bill Barr did was point it out, and now the long knives are out for him, since Trump has named him the attorney general. The long knives are out, because that indicates that Barr is not objective. Well, at the time, the Democrats hated James Comey for what he had done because while he announced that she was exonerated, he lists all of her crimes!

Do you remember when that presser happened? We all thought that Comey was still a man of law and order, and we thought that what he was doing might have been out of frustration. We thought that he might have been told that they weren’t gonna pursue Hillary and that he was outraged by it based on what he had learned in the investigation. So he goes and does this press conferences on July 5th where he basically lists and explains her criminal activity regarding trafficking in classified data and using an illegal server that was not protected, not secured.

We thought that Comey (back then, we thought he might have been a law-and-order guy) was essentially trying to tell the American people what she did because he was ticked off she wasn’t gonna be prosecuted. Well, we came to learn much later that he made the decision not to prosecute her, which the FBI director never does, and he had the authority — well, not the authority. He had the ability to do it because Loretta Lynch had compromised herself by meeting with Bill Clinton.

So if she announced that they weren’t gonna pursue, then people could say, “Well, yeah! You just maybe had a meeting with Hillary’s husband you discussed this?” “Oh, no. We talked about her grandchildren.” “Well, fine, except you don’t have any, Ms. Lynch! So what in the world were you doing talking about your grandchildren?” Everybody knew what was going on. So now when Barr comes out and says this, they’re trying to say that Barr is not on the right page here, because the right page is to be defending Comey for having been fired by Trump, who was trying to obstruct an investigation.

James Comey should have been fired the very end of the day on July 5th for what he did! At the very least, he violated lists and lists of ethics. So that, basically… I just wanted to pass on to you that that’s why they’re mad at Bill Barr, because he was critical of Comey and the way he conducted the press conference, and he also then further stated that Trump had every right to fire the guy! He pointed out that Rod Rosenstein had written a memo to Trump recommending that Comey be fired!

All of it appears to have been a gigantic setup to then go after Trump, name a special counsel on the auspices of collusion with Russia and obstruction of justice.