RUSH: Let’s go to the audio sound bites. I want to first start… Here, grab sound bite No. 3. We put together a montage here of the Drive-By Media pushing impeachment all weekend, and what this is… I mean, this is designed to do exactly what I have been warning everybody was coming. They’re trying to dispirit you.

They’re trying to make it harder for you to verbalize your support for Trump. They’re trying to make you doubt him. It’s all about driving his approval numbers down to the thirties. It’s about making you think this is a lost cause. “Trump can’t survive. He’s either gonna be impeached or he’s gonna be indicted — and do you want to support somebody like that?” Here’s the montage:

ARTHEL NEVILLE: Will Democrats look to impeach the president?

CHUCK TODD: Let’s go to this issue of impeachment.

LAWRENCE O’DONNELL: Donald Trump will be, must be impeached!

CARL BERNSTEIN: They are the kind of offenses, uhh, that would call for impeachment.

GEORGE STEPHANOPOULOS: … may be grounds for impeachment.

SAVANNAH GUTHRIE: … the prospect of impeachment.

MAX BOOT: This is, in fact, one of the reasons why you have the impeachment clause.

MARGARET BRENNAN: …adds up to meet the standard for an impeachable offense?

AL SHARPTON: Should the president be concerned about the talks of impeachment?

TOM LLAMAS: … the drum beats from Democrats for possible impeachment get louder.

KIMBERLY ATKINS: … if House members find impeachable offenses, it is not just the right thing to do. It’s their duty.

JOHN DEAN: The House is going to have little choice other than to start impeachment proceedings.

RUSH: What are they talking about again? They’re talking about the Michael Cohen plea deal in which it is stated that a prominent candidate directed him to make payments to two women for their silence in violation of campaign finance law. It is not a violation of campaign finance law. If it were, there are 264 members of Congress vulnerable to charges. 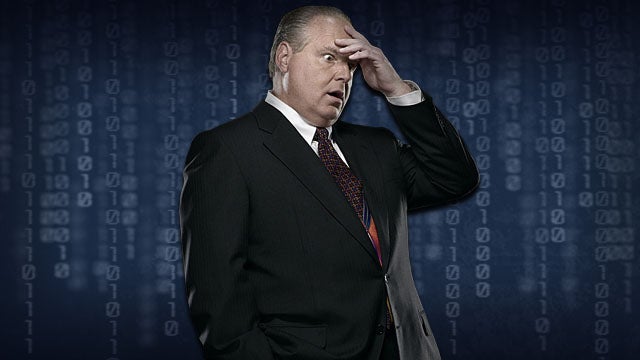 Seventeen million has been paid out of a slush fund of taxpayer money to women who have accused members of Congress of sexual harassment or abuse. These are private contractual arrangements with nondisclosure agreements. There was no intent to avoid campaign law or any of the such. And they’re just running around talking about how, “Well, we could indict. We might indict. It could be an indictable thing. It could be something we would impeach over.”

Look, they can impeach over anything if they want to try. And that’s why they’ve gotta get the numbers down. If they get Trump’s numbers down to 30% they’re gonna impeach him for the way he blows his nose! And they’ll come up with a way to call it a high crime or misdemeanor. They can impeach for it ’cause impeachment is a political act. It’s not criminal. And there’s no way that they’re gonna impeach in the House if they can’t get the votes of two-thirds of the Senate for a conviction.

And the only way they can do that is if they get the numbers down to 30 or lower. And if that happens, there won’t be an impeachment. Somebody from Republican Party will go to the White House and say, “Mr. President, you’ve lost all support here. We can’t guarantee that you would survive an impeachment. We think you might just be best advised to quit,” which is what happened to Nixon. Which is why you are hearing this term unindicted coconspirator. This goes back to Watergate.

The Watergate Seven were charged and indicted with the crimes that occurred during Watergate. But because the DOJ has guidelines saying you cannot indict a sitting president, they couldn’t indict Nixon, and so the special counsel named Nixon an unindicted coconspirator. Where did this come from? Strictly a term designed to drive down public opinion.

And you’re hearing that term begin to trickle out now about Trump. Not about Russian collusion. Not about tampering with votes. Not about anything that this started out to be. Nope. This is about supposed campaign finance violations, which are not that.