RUSH: How many of you remember the name Christine Blasey Ford? You know what? I should have mentioned. I had this out a couple days ago and didn’t. Kavanaugh, the effort to destroy him obviously worked. Kavanaugh sided with the left in protecting the funding by states of Planned Parenthood and already there are stories in conservative media, “Don’t tell us, oh, no. We’ve got another Sandra Day O’Connor.” A lot of people out there writing “I knew it. I knew it. I knew Kavanaugh was not a good guy. I told Trump don’t do it, he’s not really a conservative, he’s not one of us.”

I think Kavanaugh — I don’t know him, never met him, I can’t testify to anything about him. But I know the media pressure like the stuff he got affects people who live in Washington. It just does. Nobody who lives and works in Washington wants to get Donald Trump kind of treatment or even Republican-conservative kind of treatment. So what was it was that’s said about Kavanaugh? Hates women, rape chain, date rape, Kavanaugh, abuses women. What’s the first ruling that he signs on to with the left? Protecting Planned Parenthood and abortion.

Anyway, Christine Blasey Ford, remember how we were told that she risked everything coming forward? And one of the reasons that we had to believe her was that she was essentially ruining the rest of her life by coming forward. She could have easily stayed in the background at the all-female university, wherever it is she worked. And she could have continued to talk in that uptick kind of way that she does. And she could have continued to be a victim for the rest of her life.

But instead she came out and she courageously tried to keep somebody she thought was not qualified be on the Supreme Court. And, as such, her life is over. I told you then it wasn’t. She’s gonna get book deals. There’d be movies made about her, she’ll be bonused and paid as a consultant. And then there’s this. 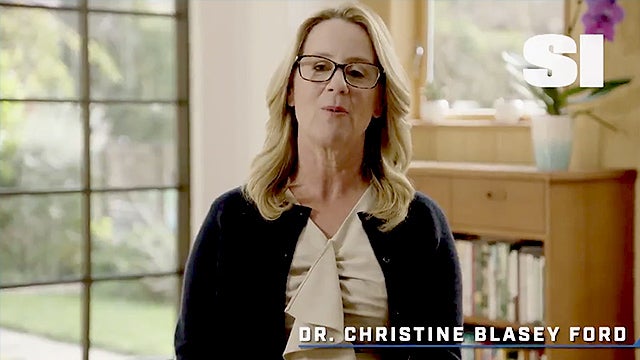 I thought her life was over. I thought the accolades were never gonna happen. I thought she was gonna fade away into obscurity, her life was gonna be ruined. And now instead here comes Sports Illustrated doing a great impression of ESPN. What can you say about Sports Illustrated that hasn’t already been said about ESPN? ‘Cause going political worked so well for ESPN. Subscribers fled at an alarming rate.

SI said, well, that’s what’s cool, losing subscribers to the political cause. That’s apparently what we have to do, too. And so by having Christine Blasey Ford introduce Rachael Denhollander, Sports Illustrated has equated the two as if both were equally believable, abused, and courageous. Blasey Ford is not even in Rachael Denhollander’s league, but she’s now been placed there by Sports Illustrated.