Citizen of Our Nation’s Capital Reports No Chaos

RUSH: Okay. Finally, it’s time to get to the phones, and we’re gonna start in Washington. This is Edward. Welcome, sir. Great to have you. You are up first today. Hi.

RUSH: Thank you, sir. They all appreciate it. We all do.

CALLER: I know you do. Hey, Rush, I’m gonna give you a report from Washington, D.C., at the corner of 14th and Constitution, and I just want to let you know that the Treasury just collapsed, the mint is on fire, and the street is strewn with automobiles tipped upside down and they’re all on fire, and Nancy Pelosi is leading a throng of illegal aliens throwing Molotov cocktails down Independence Avenue. So, yeah, there is chaos here. Okay. (chuckling) I drive into D.C. every day. This place is like a ghost town! Everybody’s already left, everybody’s already checked out of here, okay? This government shutdown, it’s a bunch of smoke and mirrors.

RUSH: The Christmas break probably starts the day after Thanksgiving in that town.

CALLER: Oh, I notice. I know ’cause I drive into town every day I notice the traffic patterns, and as soon as we’re coming to Thanksgiving time, you could just see that the traffic tail off, and you know everybody’s just… They’re taking their vacations now. This place, everyone’s left already. So who cares? You know, Rush, I agree with you 99% of the time. But today I agree with you 99.99% of the time (chuckles) because I say we ought to do this more often. I wish the Republicans would do this more often. Take these issues and make them eat them. Make Nancy Pelosi eat that issue. She wants drugs coming over the border? Let her eat that issue. Chuck Schumer wants illegal aliens coming in? Make him eat that issue. 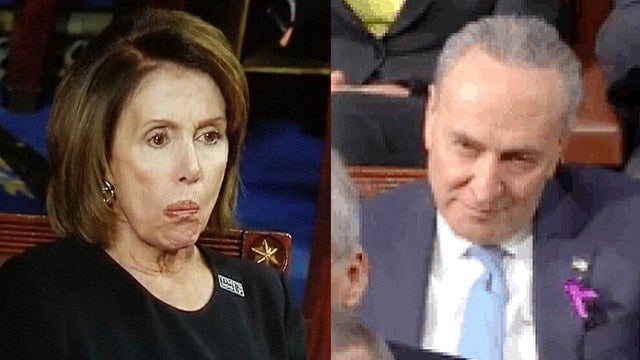 RUSH: Exactly! Put the onus on these people! This is what’s at stake here! You know, the Democrats portray all of this… For example, they say that we want to shut down illegal immigration because we’re racists and we don’t like poor people. We don’t like brown people, and we don’t like people who don’t speak English. They try to portray our position on this as something other than what it is. It’s very simple. It’s the glue that holds the country together actually. It’s called the rule of law. That’s first and foremost. It’s illegal!

Then you add unconstitutional to it when you start talking about sanctuary cities. It’s illegal! The country can’t function this way. We’re not opposed to immigration, and it ticks me off to even have to say this. We have systems established to allow legal immigration, and people have played by those rules forever. The Democrat Party wants these rulebreakers and lawbreakers to be able to come in to the country with open arms on our side and impunity when they get here! And it’s time that the results of this get thrown right back down their throats. I agree with you.