RUSH: Grab audio sound bite No. 20. Chuck You Schumer just in. They’re still in shock. They literally cannot believe what happened. Seriously, you have to go back to Wednesday when they thought that they had not only defeated Trump but humiliated him, because here he is making a big deal over the border wall and they thought it was such a slam-dunk defeat that they’re out celebrating, partying, dancing, consuming adult beverages, singing. 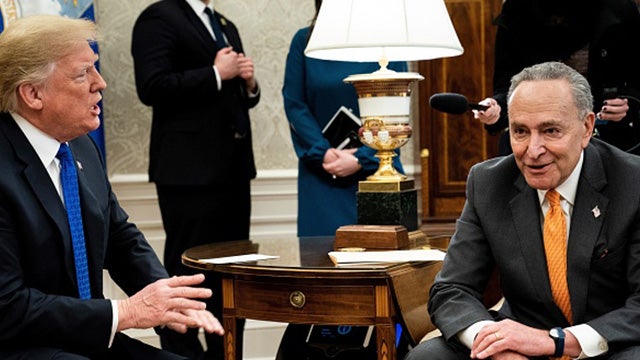 Now this. And I don’t care how they try to slice this; the onus is now on them. They can point fingers at Trump all day long for putting them in this position, but it’s very simple. They keep talking about government shutdown and how, “We cannot afford them. We cannot have them! They’re devastating; they’re bad.” Well, all you gotta do is $5 billion. Forget even what it’s for! Spend $5 billion and your precious government can stay up and running.

Do you remember, ladies and gentlemen, Chuck Schumer shut the government down for three days back in January this year, way back in January? The Schumer Shutdown! Remember that? Remember everybody was talking about how Schumer had his lunch handed to him? The Drive-By Media was really lambasting Schumer for making a strategic mistake in forcing a shutdown, and it was called the Schumer Shutdown.

But do you remember any itinerant chaos attached to it? Do you remember the media or anybody in Washington acting like the end of the world had happened? No! They were mad that Schumer ended up getting blamed for it, and thus the Democrats, not that it had happened. It was a three-day government shutdown in January that was so devastating, you don’t even remember it! Nobody remembers any of them because nothing horrible ever happens in a government shutdown!

You know why they did? You don’t even remember that, do you? No, don’t feel bad. Nobody does. Nobody remembers that government shutdown. That’s the whole point! I’m sorry to yell, folks. But I’m at my wits’ end here dealing with this stuff. In fact, how many times we been through this? How many times does this game get played and the same damn…? The media has a cut-and-paste script that they use for these stories! There’s nothing original in it. It’s the same song and dance. It’s the same doom and gloom. 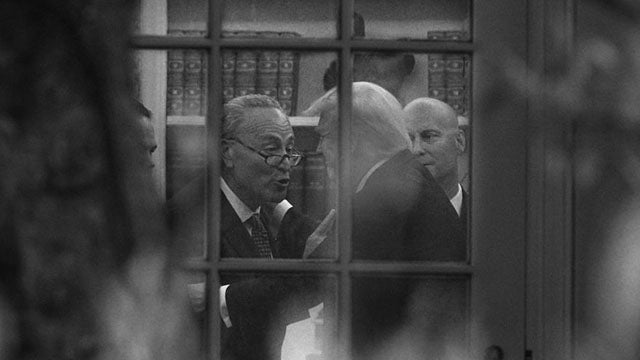 It’s the same apocalyptic nature. The fact is nothing happened. The stock market actually (in the last three got there shutdowns) has gained strength, the last one by three percentage points. The last government shutdown, the Schumer shutdown in January was on her the fact that they did not get amnesty for their beloved dreamers. Ahh. Now you’re starting to remember. Yeah, Trump refused to cave on amnesty for the DREAMers.

They thought they had Trump over the barrel because, as always, Republicans cave when there’s a government shutdown threatened. But Trump didn’t. And they purposely forced that because they wanted Trump to do a 180 on anything involving illegal immigration. They wanted Trump to cave and allow amnesty, even if it was just for a relatively few number of DREAMers. That would have been a major score. “Trump caves! Trump agrees to amnesty.” I can see the headlines now.

Instead, he didn’t and there was a government shutdown and it was called the Schumer Shutdown. The media did not make a big deal about it ’cause they didn’t want the Democrats getting blamed. They did jump on Schumer for making a mistake and being outmaneuvered and outsmarted, but they didn’t report on chaos and the end of government and all these government workers out of work and not getting paycheck. There was none of that. So here’s Schumer today. This was just moments ago on the floor of the Senate…

SCHUMER: President Trump hounded by the radical voices of the hard right, threw another temper tantrum. And here we are, once again, on the brink of what the president has spent months saying he wanted — a Trump shutdown. The president seems to relish it. He seems to feel it will throw a bone to his base. The problem being his base is less than one quarter of America.

RUSH: His base got him elected president, Chuck. His base got him elected president, Chuck, and he has now solidified his base, Chuck. What is this? Trump base continues to shrink every time they open their mouths about it. Trump’s base is less than 25% of America? Hardly. Dream on, pal. “Hounded by the radical voices of the hard right … threw another temper tantrum, and here we are once again on the brink of what the president has spent months saying he wanted — a Trump shutdown.” 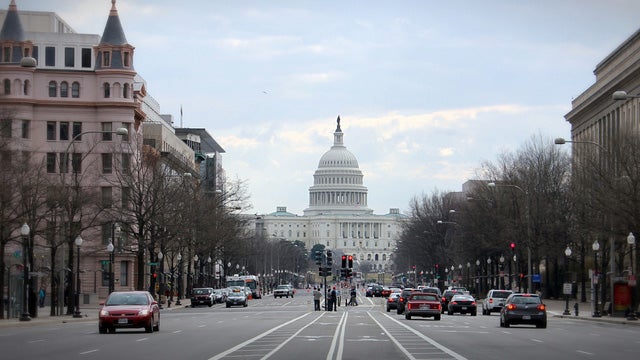 You’ve got a Democrat shutdown on the way — and, by the way, talking about what’s next here. Supposedly there’s gonna be another meeting between Trump and this time Republicans in the Senate. Yesterday it was Republicans in the House. During situations like this, it is often thought that back-room negotiations are underway and that a deal is on the verge of being struck, that everybody’s out in public posturing on their hardline ideological positions. But in the back, smoke-filled rooms there are adults that are negotiating and finding ways to end this chaos before the end of the day when the government would have to shut down.

CNN says that that’s not happening. CNN says don’t look for such a deal because there isn’t anybody working on one. Here’s how CNN reports it. This is on their website. “Often in brink-of-disaster moments on Capitol Hill, there are cooler heads behind the scenes who are working on a way out. Drafting a way to thread the needle. Figuring out a pathway to pull everyone back from the edge. Quietly pulling together a deal to calm everyone and serve as the legislative silver bullet.” CNN says, “That is not happening now.”

It’s not happening at all because there is no back room and there’s nobody in the back room. As a result, “The federal government,” the precious, the beloved, the can’t-do-without-it federal government, “is hurtling toward a partial” (Snort!) Partial! “government shutdown. The only way it doesn’t happen is for one side to cave a massive way. And there’s not a lot of hope that’s in the cards, according to aides in both parties on Capitol Hill.” There’s one thing we know. This is gonna end. Everything ends and begins again. This is going to end.

There is going to be a resolution. This is what everybody knows. Everybody playing this stupid game knows that it’s gonna end. Someday, somewhere, some hour, it’s gonna end. How it ends is what this is all about. I have to laugh at this Trump’s base is 25% of the country. Trump has higher approval ratings right now from Republicans than any other president except George W. Bush right after 9/11. Trump’s approval rating in his own party…

Ninety-three percent of Republican women approve of the job Trump is doing. His base is not shrinking! His overall approval rating is holding steady at 44 to 48%, depending on where you look at the poll. He’s not losing ground in personal or presidential approval polls. But you listen to these guys, “With everything that happens in Washington on a given day Trump is losing support and the country’s descending into further chaos.