RUSH: Stephen Miller, who is a senior adviser to President Trump on immigration and related issues in the White House, was on CNN’s Situation Room with Wolf Blitzed last night, and the whole thing went 20 minutes. Wolf Blitzer came off as a Democrat Party activist, and I don’t think he knew it when it was happening, and Stephen Miller finally called him out on it. You know, Wolf is saying, “Well, well, the Democrats are for border security! They just don’t want to spend five billion wasteful dollars for a wall.” 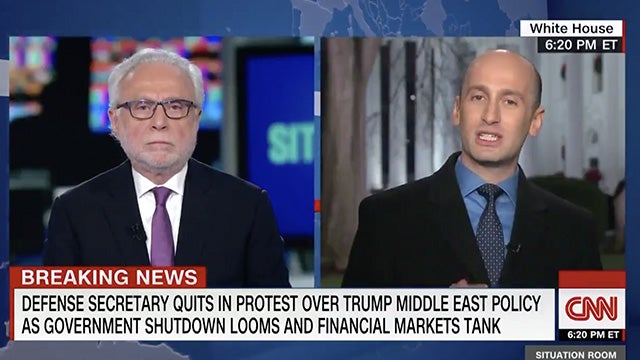 Stephen Miller says, “Can you cite for me one example of Democrats being in favor of border security?” And Wolf Blitzed (stammering), “Well, uh, they do! They love it! (sputtering)” So we have relevant excerpts from this exchange, and here is the first one.

MILLER: The Democrats, all they need to do is support border security and the government will be funded.

BLITZER: They don’t support $5 billions to build a wall.

MILLER: Could you identify, Wolf, for me some of the kinds of border security you’re saying the Democrats are saying they’re gonna support?

BLITZER: (crosstalk) The Democrats all say they support border security.

BLITZER: But building the wall —

Is that all you need, Wolf?

The Democrats just say “X” and that makes it so?

They don’t! That’s the point of all this, and that’s the point that needs to be driven home exactly like Steve Miller here did it and the Senate Republicans need to do keep doing. They don’t support border security. They are opposed to it. They’re standing in the way of it. They are blocking it. They are blocking every aspect of border security, over five billion measly dollars, because they hate Donald Trump and they cannot allow him to have anything that would constitute a win.

The Democrats are against compromise. The Democrats don’t believe in process. The Democrats are unwilling to “cross the aisle and show that we can work together to make government work.” They’re the ones that are the roadblocks here, and that needs to be pounded — and kudos to Stephen Miller for drawing them out on this. There’s one more to this, ’cause Miller was on a roll. He kept going and wolf finally figured out he might be a little trapped.

MILLER: — and agree to help with border security.

BLITZER: (talking over the guest) Well, what if there’s no $5 billion in the legislation between now and tomorrow night?

BLITZER: You know, when you say, “We’ll see what happens,” is that a good enough answer for the nearly one million federal workers, many of them law-enforcement types, who are not gonna get a paycheck after midnight tomorrow night?

MILLER: That’s a question for the Senate Democrats and especially for Chuck Schumer, who apparently — at Nancy Pelosi’s bidding — rescinded their support for a bill that funds border security.

RUSH: That’s it! It’s exactly right! It’s onus time on the Democrats now! But you notice whether it’s Wolf Blitzer or Nancy Pelosi or Chuck Schumer, “Well, what about the federal workers, many of them law-enforcement types, who are not gonna get a paycheck?” Wolf, you know as well as I do they’ve already gotten paychecks for the period of time that they’re working. Over Christmas, the government may shut down.

Christmas presents have been purchased with credit cards. This is a nonstarter. But you see (sobbing), “The Republicans are putting people out of work at Christmastime! The Republicans are causing misery at family Christmas trees and Republicans…” Wolf Blitzer, acting like a good loyal Democrat hack, is right in the middle of it — and Stephen Miller shut him down.