RUSH: The attorney general confirmation hearings for the former attorney general, William Barr, are in recess. I’m sure he’s gone into an anteroom there to get to a radio, be able to get his marching orders from me as to how to proceed for the rest of the afternoon. In which case, you know, kind of dial it back on how good buddies you are with Mueller. We get it. I think you’ve done enough to put the Democrats at ease. Now time to make us feel a little bit better about what all’s going on here. 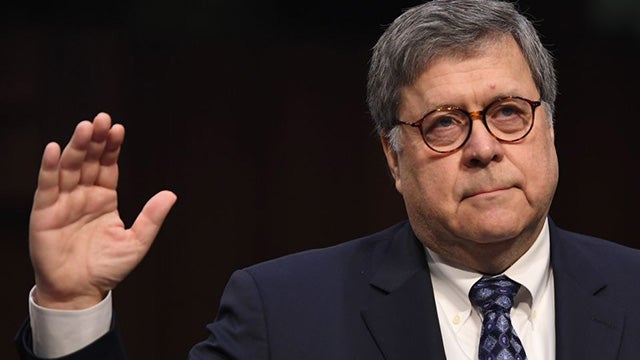 In addition, we have, folks — we’ll get into detail about these hearings. I’ve got some audio sound bites to share with you as the program unfolds today. And we’re faced with the same old thing. Is this guy saying what he’s saying because he knows he’s gotta get the votes to get confirmed and then after that the reality happens? Is he gonna get any Democrat votes? He’s already been attorney general, George H. W. Bush.

I can see him not getting a single Democrat vote or maybe they assign a couple of Democrats to vote for him, but the partisanship is such that I don’t see much of anything on the Democrat side that they would look at as a positive in voting to confirm the guy. And he’s doing everything he can to assure them that Mueller is wonderful, that the Russians meddled and that he is not gonna do anything to stop the investigation.

RUSH: William Barr has now resumed his confirmation hearings before the Senate Judiciary Committee on the nomination Trump has made to have him become the new attorney general. And he’s saying things that have a lot of people worked up. He’s saying (imitating Barr), “No, no, no. Bob Mueller is a good buddy of mine, and there’s no way that Bob Mueller would do a witch hunt. There’s just no way. Bob Mueller is incapable of hunting witches.”

And so the Drive-Bys are saying the attorney general nominee breaks from Trump! They’re running stories, has Trump been bamboozled, has Trump been fooled, has Trump nominated a chicken or a fox to oversee his chicken house or whatever. And then the other thing is that Sessions should have recused him, absolutely right. Any question about Mueller, any question about Mueller’s investigation, Barr is giving an answer the left and the media applaud.

“Do you think Mueller should reveal the results of his –”

“Yes, sir, I most certainly do, according to the rules.”

“Do you think Mueller should be fired?”

“Do you think Bob Mueller’s investigation should be interfered with by the president?”

“No way, not on my watch. President Trump will not be allowed to interfere with my best buddy Bob Mueller’s non-witchhunt investigation.”

“Do you believe that the Mueller investigation should be allowed to go on for 50 years?”

“Absolutely, Senator, whatever Mueller needs, whenever he needs it, I, as the attorney general want to make sure he gets it.”

“What if the president wants to fire Mueller?”

So now we have to decide — now, see what I did there, by the way? I employed a common communications trait called exaggeration in order to pierce through all the noise so that you would hear me and have some idea of what’s going on. Today’s media, hearing this, “Limbaugh with a litany of misquotes.” I can just see it now, the way this stuff all happens. But I’ve just given you a basic overview of how this has all gone.

Lindsey Graham and others pointed out last week that William Barr has been friends with Mueller for many years. Their wives even attend Bible studies together. Secretly, let me ask, how many of you, when you heard that Mueller’s wife does Bible study, thought, “What? Doesn’t fit.” Just asking. I mean, if you’re part of an overall silent coup, if you are essentially part of an effort to get Donald Trump thrown out of office, how religious are you? I’ve had people make that observation to me.

And Barr, “Senator, of course within the framework of the rules and framework of the law, absolutely. Have no fear from me what might or might not happen regarding my good friend Bob Mueller.” I guess it was supposed to reassure us, all this Bible study business and Mueller and Barr being best buddies. There was a memo that Barr wrote. It was 17 or 18 pages long and it was out of the blue. Now, he’s the former attorney general and I should tell you that the inside-the-Beltway legal community just thinks this guy hung the Moon.

I’m not exaggerating. I can’t tell you how many people I’ve spoken to, people that I trust in the legal judiciary community who think this guy is just the best, that Trump could not have chosen anybody better. Nobody is even close. That is the imprimatur that this guy comes to these hearings today with, that there’s nobody else better suited for the job, nobody better. Well, he wrote a memo out of the clear blue as just an interested lawyer. And it’s 17 or 18 pages, and it basically took Mueller’s obstruction investigation to task.

And Barr’s memo, which was again, nobody asked him to write it. It wasn’t an op-ed for a newspaper. He just decided to write it. He wanted to weigh in on it. He knows that he has cache. He know that he carries a lot of weight. He knows as a career legal beagle, former attorney general, George H. W. Bush — that’s many moons ago. That’s like 25, 28 years ago. He was attorney general back then. In fact, there’s still two members of the Judiciary Committee who were members of the committee when he first went through his hearings all those years ago.

One of them is Pat “Leaky” Leahy, Senator Depends, and I think the other one is Senator Grassley. At any rate, he took Mueller’s obstruction investigation to task on the basis, the theory that it’s not obstruction for the president to fire the FBI director. Barr, by the way, has also been the director of the FBI. He was the head of the CIA. He was the head of the DIA. He was chairman of the Joint Chiefs of Staff. He has been the national security adviser. I’m exaggerating again. My point, this guy has been everything there is to be in government.

So he writes this memo. Nobody asked him to. It’s not targeted — it’s not an op-ed in a newspaper, it’s not an article in a think tank, he just writes it, and it gets out, and he claims that looking into Trump for obstruction is a mistake and it’s wrong-headed because the executive has the clear authority to fire anybody in the executive branch. So he’s being peppered with questions today about that memo from the likes of the Democrats, Dianne Feinstein, Sheldon Whitehouse, and all the rest of that clown show that they have on the left side of the aisle there.

And they’re asking, “Was that really a job application, Mr. Barr? Were you just telling Trump you wanted the job as AG and you were trying to signal to Trump that you were gonna fire Mueller and you’re gonna make sure this investigation goes nowhere and you put this memo out that the investigation’s really off the rails. That was a job application, wasn’t it?”

“No, Senator, it was not a job application. I think, Senator, if I really, really wanted to apply for a job in the Trump administration there are far more direct ways I could apply than to write a 17 or 18, 19-page memo because everybody knows Trump can’t read beyond page one.” He didn’t say that, but that’s the assumption, of course. It’s not that Trump can’t read beyond page one. It’s that he doesn’t because he’s not interested enough. Have all these stereotypes.

I saw Professor Dershowitz say, “Yeah, he’s gonna get some Democrat votes ’cause everybody in town loves him.” I don’t know. I think people still don’t get ’cause they may be too close to it — it’s more than a partisan divide, whatever is happening in that town, partisanship-wise, it’s more than a divide. There isn’t even a bridge. In fact, you might even say that there are walls built to keep Democrats from crossing over one way and Republicans the other way. Of course, the Republicans don’t let walls stop them when they want to agree with Democrats.

He’s saying this stuff. Does he mean it, or is this just what has to be said? We won’t know for a while so it basically boils down to is he with Trump and thinks the swamp it needs to be emptied, or is he there to defend the swamp in a stealth fashion from the administration of Trump?

RUSH: Here’s a Bill Barr sound bite from the judiciary committee hearings today on his confirmation. Sheldon Whitehouse, Democrat, Rhode Island, “Just to be clear, Mr. Barr, did you request or signal or otherwise communicate in any way that you wanted Rod Rosenstein to go?”

WHITEHOUSE: So we will find no William Barr fingerprints on Rosenstein’s departure?

BARR: No! Rod and I have been talking, you know, about his plans. He told me that he viewed it as a two-year stint and liked to use, if I’m confirmed, my coming in as an occasion to leave. But we talked about the need for a transition, and I asked him if he would stay for a while, and he said he would. And so as of right now, I would say he has no concrete plans, I have no concrete plans in terms of his departure.

BARR: We’re gonna sort of play it by ear and see what makes sense.

“You’re not gonna get rid of Rosenstein, right? You’re gonna let Rosenstein finish his job of getting rid of Trump, right?” “Absolutely, Senator! It was always gonna be a two-year stint, but he and I are gonna talk.” “And what about Mueller!” “I told you before, ‘He does not do witch hunts.’ I’m not gonna let anything happen to your effort to get rid of Donald Trump.” That’s basically the message that he’s sending them today. So we’ll see.

RUSH: So I’m watching Spartacus, the senator from New Jersey, ask Barr a question, and there are two of his staffers seated right behind him who look bored and embarrassed. I don’t know what Spartacus is asking, but it’s really not asking. He’s making a speech about something. So Kamala Harris is over there studying him. She’s not on the committee anymore, I don’t think, but she’s jealous, because she’s running for president, too, and he thinks he is.