Do a State of the Union Rally, Mr. President!

Greetings, and welcome. Rush Limbaugh and EIB Network. Back at you. Here we are. What is this? Wednesday already. Middle of the week, hump day it is. Our phone number if you want to be on the program, 800-282-2882. Email address, ElRushbo@eibnet.us.

States of the Union were usually submitted in writing from the president to the Congress, and they were a bunch of, yes, sir, yes, sir, three bags full. Hardly anybody ever saw them. In the TV era they became spectacles, they became shows, and they aren’t really even the State of the Union anymore. It’s where presidents announce their agenda and promise this and that and the spending to go along with it.

But Pelosi has given Trump a great opportunity here, I think. See, you gotta look at this on the positive side. Imagine if there was a State of the Union address during the government shutdown. You know what’s gonna happen in there. The Ocasio-Cortez crowd and all of these Democrat freshmen are gonna make a spectacle of the thing.

Who needs any of that? We don’t need that! We don’t need our president in the House chamber run by a bunch of radical leftist, hate-filled Democrats. What Trump ought to do is a rally or, better yet, rent out an arena and don’t do a rally but do a literal State of the Union address and literally talk about the State of the Union and the Democrats’ role in destroying it or damaging it. 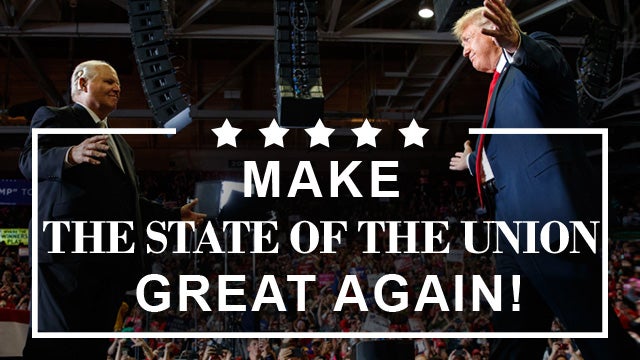 There’s nobody that can do that better than Donald Trump. And in that way, you don’t have any Democrats in that crowd unless they try to infiltrate it. I mean, you don’t have Democrat members of the House. Who needs this? Trump is disrupting everything else in Washington. Why not the State of the Union? Turn it upside down. Turn it into something it’s never been before. Why should he go into a chamber run by lunatics who have an irrational hatred for him and are doing everything they can to overturn the founding of this country? Why subject himself?

“Well, Mr. Limbaugh, it’s a requirement of the Constitution.” Well, if the Speaker of the House does not make the chamber available, then it’s not Trump’s problem. If Pelosi’s not gonna open the doors, if she’s not gonna invite the president in, then he can submit whatever he wants to in writing and then go do his own State of the Union address maybe the day before the date, maybe the day after, maybe the same date, I don’t know.

Do a rally. I promise, I’ll tell you what, I’ll introduce him. I’ll make the deal. I will introduce him at the State of the Union rally. I did it in Cape Girardeau when he was there. It’s not a demand. It’s not even a request. It’s an offer. But I think, folks, it’s a golden opportunity. And it would be part and parcel of Trump hanging in. 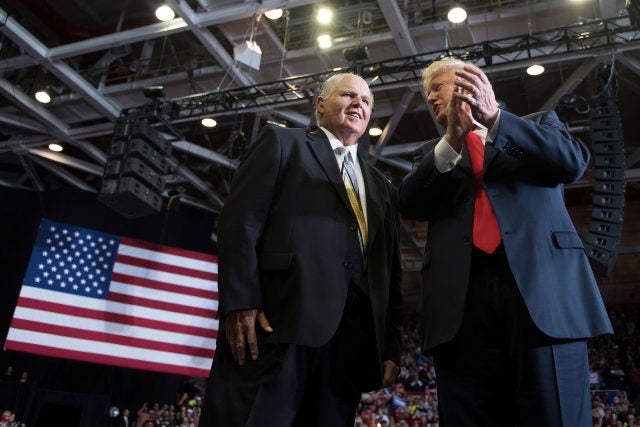 It’s gotta be tough. It has to be extremely difficult, because everybody’s arrayed against Trump. Now a bunch of economists are coming out and saying, “Hey, the economic hit because of the shutdown is much worse, much worse than we thought.”

On CNN they’re actually telling people to be wary of plane crashes because air traffic controllers are calling in sick and not working, as though the American air traffic control system would knowingly operate at risk of airplanes crashing. But we have Poppy Harlow interviewing some dingbat actually talking about the possibility that there could be rampant plane crashes, planes falling out of the sky because of the government shutdown.

We’re also getting — and this tells me that the Democrats are focus-grouping things — I have I think it’s three, and it may be by now, four stories of Americans having to choose between insulin and the mortgage or insulin and food. But it’s insulin and something else. It’s not medicine in general. It’s insulin. It has to be focus grouped. And the media can’t wait to report all of this stuff. So those are my just off-the-cuff thoughts on the State of the Union.

I just think it’d be a great opportunity for Trump to go around the media, to go around the Democrats, to avoid what would, no question about it, be an attempt to disrupt the whole thing with, by the way, the encouragement of the House leadership. Talk about people being concerned about whether or not protocol is being violated or what have you, that’s long out the window now. Democrats have long ago thrown out the idea of protocol behavior, behavioral norms and this kind of thing. So why even subject yourself to it and then to a media that is going to be repeating all of the anti-Trump stuff that would happen inside the House chamber.

So go do a speech somewhere and tell the American people what the Democrats are doing. Describe for the American people how the Democrats are abandoning borders and condoning crime and lay it all out for everybody. And for a measly $5 billion, the equivalent of… If you have $50,000, do you have $47? That $47 out of $50,000 is about where $5 billion is in relationship to our national budget every year, the annual budget of four-some-odd trillion. The Democrats are not about to shut down their pipeline for their permanent underclass. 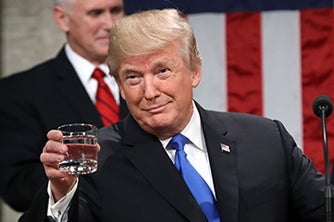 She doesn’t want Trump coming up and making a speech during the shutdown. Why? If Trump’s the guy wrong, if Trump’s the guy that’s barely hanging on, if Trump’s the guy that so demonstrably in the minority, why not bring the guy up? Why not open your chambers and say, “Come on, Mr. President! Tell us.” Instead, Pelosi wants to keep the doors to the House chamber shut so that President Trump can’t get in there. Rent a football stadium. Rent an arena. Fill it up! Give the State of the Union to people who want to hear it!

I, frankly, again do not want to hear — I don’t want to see — a bunch of infantile, childlike babies, Millennial Democrat freshmen trying to disrupt this whole thing and making sure that it doesn’t happen.

RUSH: There are some southwestern United States ranchers, Texas and New Mexico, that are saying they’re finding prayer rugs out there. Prayer rugs near the border. That means some militant Islamists are coming across, in addition to whoever we think. And there’s a new caravan starting up out there.

So we can’t conduct business as usual because there are security concerns for members of Congress. But when it comes to security concerns for the border, for average Americans, screw that! That’s not even a legitimate subject. But we’re gonna shut down the State of the Union because of security problems. What would those security problems be? And look. I know it’s all just a ruse anyway.

RUSH: Crazy Bernie’s tweet: “The scientists tell us that the future of the planet is endangered by climate change. Meanwhile, because of Trump’s government shutdown, about 95% of E.P.A. employees have been furloughed because they are ‘non-essential.’ How insane is that?” he asks. How insane is it that we have a government agency and 95% of the people that work there are nonessential? That’s what’s insane! 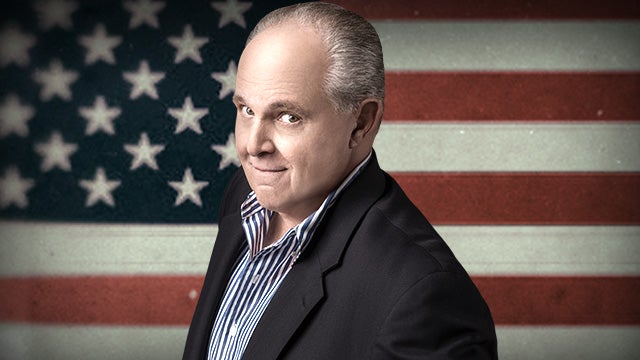 And all of these non-insane people have all kinds of unelected power to write regulations that punish and penalize their political opponents! This is why Trump has to keep hanging in. This is why he cannot lose this. He can win this if he can just hang in for a few more weeks. So 95% of EPA employees are furloughed because they’re nonessential? Why do we even have ’em there in the first place? See Crazy Bernie thinks it’s insane to get rid of 95% of the people that work there by calling them nonessential. But they’re not there because they are nonessential.

RUSH: So Nancy Pelosi says that she just wants to cancel the State of the Union during the shutdown, security problems and a number of other things which we highlight in her statement a moment ago. Rick Crawford, Republican, Arkansas: “Hey @SpeakerPelosi,” this is a tweet, “as a former bomb tech who has served on Secret Service details, I know how to sweep a room & make it secure. I’ll volunteer to help ensure that the chamber is secure for @realDonaldTrump & the SOTU. I’m sure my friend & fellow bomb tech @RepBrianMast can help.

Brian Mast is a congressman from here, and so you’ve got two former military guys, Secret Service guys offering to sweep the House chamber to make sure there are no bombs in there. Pelosi says (sobbing), “We can’t secure the chamber because of the government shutdown! It just wouldn’t be safe!” I still say it’s a golden opportunity.