RUSH: I mentioned that we are now into Week 5 of the narrative that I — in a golf shirt in Florida — am running the country. A media montage. Let me tell you who the participants in this one are. This is from over the past weekend. We have Pencil Neck, Adam Schiff, out there; the Washington Post columnist Max Boot; Joy Reid, PMSNBC; former congressman Brad Miller, Democrat, North Carolina. 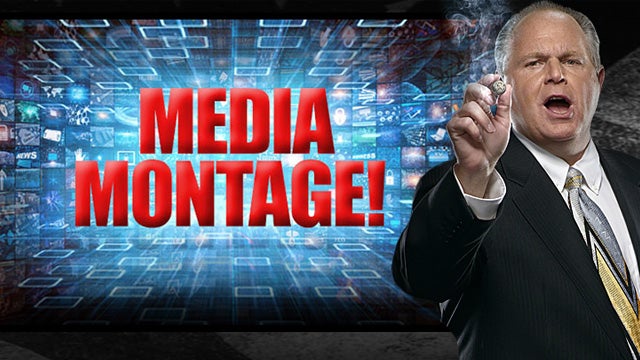 Here is that montage…

ADAM SCHIFF: The emergency is that he was criticized by Rush Limbaugh.

MAX BOOT: The president is basically the hostage of his base. He is listening to Rush Limbaugh.

JOY REID: He’s so afraid of Rush Limbaugh that he feels paralyzed and can’t act.

BRAD MILLER: It appears that Trump cannot give on anything or he will lose Rush Limbaugh.

RON ALLEN: When Rush Limbaugh said that he was going to pay a political price, he turned around and said no.

BOB KERREY: The burden really is on the president. Are you willing to reach an agreement that Ann Coulter and Rush Limbaugh aren’t going to like?

CHRIS MATTHEWS: He’s facing a two-front war; he’s got Rush Limbaugh and Ann Coulter coming at him from one side; Pelosi from the other.

STEVE COHEN: He agreed to it until Rush Limbaugh told him it was wrong.

KEITH BOYKIN: Trump got pressure and pushback from Rush Limbaugh.

ROCHELLE RITCHIE: The only reason that Trump flip-flopped on this entire thing is because of Rush Limbaugh.

DAVID CORN: …Ann Coulter and Rush Limbow (sic). They will crucify him!

BOB HARDT: He’s very worried that Rush Limbaugh and others are ready to say, “We are not with you in 2020.”

RUSH: Now, see, here again, fake news. Now, if I were like most hosts, I would be milking this and I would be trying to make it look like these guys are right, that Trump doesn’t do a thing without consulting me first. But this is so obviously BS. Now, for those of you who aren’t aware, I’m gonna tell you what happened here just so you will know how everybody here is knowingly — and that’s the key. They know they’re lying to everybody about this. This is all about impugning Trump’s base, not just me.

What happened was I’m sitting here minding my own business and I hear that Trump is about ready to sign a continuing resolution to keep the government open that did not have any money for the wall in it. Well, it turned out that wasn’t true. But that’s what I was hearing, what I had been told. So I’m talking about it right here on the radio, the real radio. As a real role radio announcer, I was talking about it. I’m expressing shock and dismay, and I’m thinking, “This can’t happen. This is just … This can’t happen.”

Well, in the middle of this — literally while I’m speaking — my phone has an alert go off and it is a message from somebody who is with the president, and the message is: “This isn’t true. The president isn’t going to sign the continuing resolution that doesn’t have money for the wall in it.” So the message to me was: Whatever you’re hearing is not true. Now, the media is portraying this as the exact opposite, and they keep creating montages based on it this way.

What the media is saying is that Trump was in the process of signing it, and then I started complaining about it on the radio, and somebody ran into the Oval Office and warned Trump that I was really unhappy and was really being critical, and Trump stopped and changed his mind and decided not to sign it. That’s what they want you to think happened! As I say, most hosts would gladly promote that narrative to try to make their audiences think that they are eminently powerful.

I do not have to make you think that.

You already know it.

So I can tell you with great certitude and security that the story they have out there — and this is Week 5 of this now! The truth is, Trump was never gonna sign it. He was not in the process of signing it, and I got a note during this supposed signing ceremony (or the period of time where he would sign it) that he had changed his mind because of me. So this is what the note said: “You’ve got it wrong. He’s not gonna sign it. Whoever’s telling you, rest assured,” and it was somebody with direct access to the president. 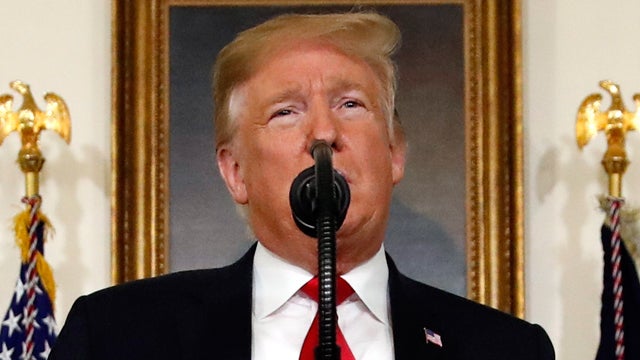 It was not him. So I mentioned after the next commercial break, “Ladies and gentlemen, I just heard. I just got a message, just got a flash note here assuring me from somebody with the president that he’s not gonna sign it.” Well, the media heard that, and they put two and two together — knowingly that they didn’t have two and two — and they’ve now run with it for five weeks, that Trump was gonna sign it and didn’t. When the truth is, he wasn’t going to sign it.

Now, this is another glowing, glaring example of how the media is literally makes it up and lies to people and all of their analysts. It doesn’t matter what network you go to — CNN, MSNBC, and whatever guests they have or whatever analysts — they’re all promoting this. And, of course, the real purpose of this is to make Trump look like a dodo, like he has no idea what he’s doing, like he can’t do anything without being told what to do.

It’s just a variation on the spin of how you’ve always been treated from the days this program began. You are a bunch of mind-numbed robots, cannot make up your minds about anything, don’t know what to think, don’t know how to vote until I give you instructions and orders. Now they’re simply saying that Trump is among the crowd that, on their own, is incapable of independent thought ’cause they don’t have any intelligence, can’t do anything without me.

And it’s also a way of focusing people that don’t listen to this program on me as the real obstacle to whatever it is that the left wants to happen here, because I obviously am a very good fundraiser for them. Now, Sarah Sanders, the press secretary at the White House, late Friday afternoon, was interviewed by a reporter who asked her about all this. Here’s the sound bite of this… 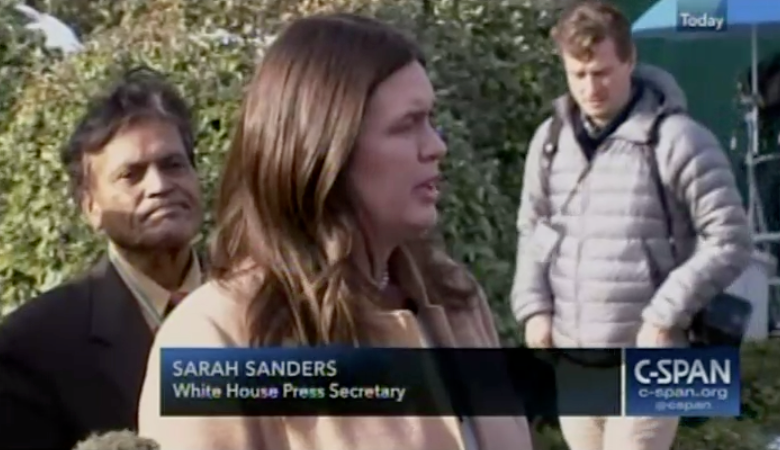 PRESS POOL: (all shouting at once)

REPORTER: It looked like he might compromise on the budget and sign a CR originally — and then, of course, we’ve heard from Ann Coulter and Rush Limbaugh. Why is he not willing to go back to where he was in the beginning, or is he?

SANDERS: The president’s laid out what he wants. We sent a detailed letter from the Office of Management and Budget to Congress, and we had a number of discussions discussing what we’re looking for. We haven’t backed down from that. We haven’t changed our position on it.

RUSH: So she essentially denies that Trump flip-flopped, and he didn’t flip-flop. He was never gonna sign it. But you hear this stupid reporter. I don’t know who it is. It’s not identified. (impression) The president signaled “he might compromise on the budget and sign a CR originally — and then, of course, we’ve heard from Ann Coulter and Rush Limbaugh. Why is he not willing to go back to where he was…?”

He never left it! He was never gonna sign it! Now we move on to CNN and Little Brian Stelter who — bless his heart — is still trying, still holding out hope that BuzzFeed got it right that Trump told Cohen to lie. Poor Little Brian. He all morning has just been holding out hope that it could still be true. This is Saturday, CNN’s Newsroom. The anchorette infobabe was Ana Cabrera, and they had a little exchange — and, of course, it was about me…

CABRERA: We saw the outrage from people like Ann Coulter and Rush Limbaugh, and the president changed his mind, saying, “No, I need the money for the wall.” 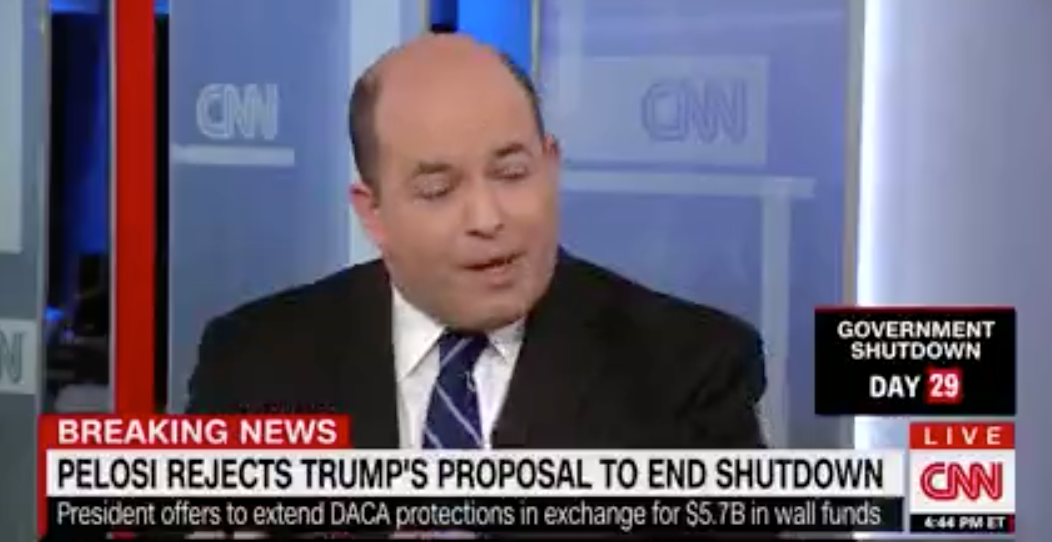 STELTER: Those right-wing hosts who were pushing the president to deliver a wall in December? They haven’t really given the president a way out of this situation now! They really have provided a lot of ideas or proposed solutions.

And here’s Ana Cabrera. She really believed this. The president changed his mind! He was all ready to sign this until… It’s 180-degrees wrong.