What I Think Trump’s Immigration Offer Was All About

RUSH: Here is the Trump proposal in a nutshell: A three-year extension of protection for DACA recipients. I think… What’s the number, 300,000 or 800,000 of ’em? A three-year extension of protection for immigrants under temporary status. $800 million in additional humanitarian aid for people showing up uninvited at the border. $805 million for new drug detection technology at our ports of entry. $782 million to hire an additional 2,750 border agents, law enforcement officers and staff. $563 million to hire 75 new immigration judge teams to fast track the processing. 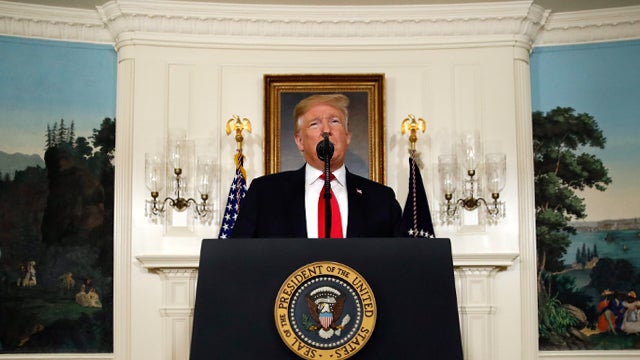 That’s what Trump is offering in exchange for $5.7 billion to build the wall. Trump is gonna present this to the Senate since Nancy Pelosi is intractable on this. There are only 53 Republicans in the Senate, which would mean that seven Democrats have to join the Republicans, ’cause you need 60 votes for this. So it is my contention the president doesn’t expect this to pass.

But he knows they’re not gonna accept it. Now, Mitch McConnell’s gonna bring it up for a vote because this is all designed to show the Democrats are intractable. There are some Democrats, however, who want to move on this. So far, seven or eight Democrats in the House (not in leadership) are interested in getting things moving here. Not every Democrat, by the way, is against the wall. There’s an increasing number of Democrats who think that we need to do something to stop this.

Many of them come from Trump presidential districts, but nevertheless. Now, the Democrats rejected out of hand Trump’s proposal even before he made it, because it leaked out. On Thursday, when scuttlebutt of a new Trump proposal first emerged, Pelosi repeated several times — in her Christine Blasey Ford imitation, that little girl voice — that she is not for a wall. She’s for affordable health care for all Americans, but not for a wall. Well, somebody needs to remind her we already have 600 miles of immoral wall on the Mexican border.

She’s got immoral walls all over her property and estates. Trump is wanting to extend that by 200 miles. So the Democrats reject it. So what do you think the purpose of this is, folks? I know a lot of you are hoping that the president will simply declare a national emergency and go get whatever money he needs and start building the wall, and I’m with you. I hope that happens. But I also believe that the best-case scenario for Trump is he would love to work a deal. He’d love to have Congress and the White House work together on some kind of deal where the wall gets built.

It’s just a desire for there to be compromise and participation here by all sides ’cause that legitimizes it. Doing it with executive action emergency status may be the only way this is gonna get done. But I knew when I heard about this proposal that all kinds of people were gonna panic. “Oh, my God, it’s amnesty! All it is, is amnesty,” and I’m gonna tell you something folks. It better not come to that. Amnesty… I’m gonna go out on a limb here.

The amnesty signed by Ronaldus Magnus, Simpson-Mazzoli 1986, was the beginning of the loss of California as a viable state for Republicans. There is no good that comes from amnesty, especially if you start talking about it for whatever the number of illegal aliens in the country is, and that number is basically now 11 million. I think it’s far more than that. If there’s another amnesty… You’ve seen the map. I pointed this out here.

Look at Texas. Look at all the congressional districts in Texas along the Mexico border. They are all light blue to purple. They’re all controlled by the Democrats — every one of those districts in Texas on the southwestern side of the state on the border with Mexico. Folks, if the Republicans lose the electoral votes in Texas, do you know what the odds of ever electing another president are? They are slim to none. “But, Rush! But, Rush, 19% of Hispanics…” I know it’s not axiomatic that every Hispanic’s gonna vote Democrat.

But, folks, the numbers flooding it in here? That poll of 19% Hispanics, those are people living and working in the country. This flood — and there’s a couple more caravans gearing up and heading this way, some now claiming asylum in Mexico. But they’re headed this way, and if the flood is not stopped, this is all… It’s gonna become demographically axiomatic after a while. It has to be stopped. It has to be stopped. I don’t…

I’m on a limb here, but I don’t think the president expects the thing to pass.

I don’t think that was the purpose of it.

So you can panic all the while if you wish, but I don’t think anybody thinks there are gonna be seven Democrats in the Senate sign on to this. (chuckles) Even though it’s got everything that they want, it’s just $5.7 billion for the wall they don’t want. To the extent the Democrats can be exposed here… Although… I don’t know if this is true. Somebody told me that it was only Fox and CNN that broadcast or carried Trump’s Saturday afternoon speech. ABC, CBS, NBC did not. If that’s true, then what percentage of Americans still have no idea what Trump’s proposal is? Hmm?