RUSH: How about this: “Notre Dame [University] to Cover up Murals of Columbus in the New World.” They have a series of artwork, tapestries and murals that depict various moments in history. And the University of Notre Dame has announced — obviously out of fear of the mob or because they themselves have been totally given over now to the phony political correctness — they are going to cover them.

They are going to obscure their own murals in a campus building “that depict Christopher Columbus in America, the school’s president said, following criticism that the images depict Native Americans in stereotypical submissive poses before white European explorers. The 12 murals created in the 1880s by Luis Gregori were intended to encourage immigrants who had come to the U.S. during a period of anti-Catholic sentiment. 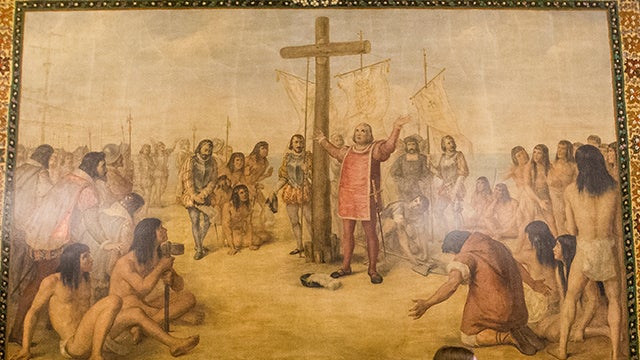 “But they conceal another side of Columbus: the exploitation and repression of Native Americans, said the Rev. John Jenkins, president of Notre Dame. It is a ‘darker side of this story, a side we must acknowledge,’ Jenkins said in a letter Sunday. The murals in the Catholic university’s Main Building are painted directly on walls. Jenkins said they will be covered, although they still could be occasionally displayed.”

Maybe if Nathan Phillips shows up and wants to see ’em.

“A permanent display of photos of the paintings will be created elsewhere with an explanation of their context,” so as not to trigger fear and loathing and panic among the students! Yes. “‘We wish to preserve artistic works originally intended to celebrate immigrant Catholics who were marginalized at the time in society, but do so in a way that avoids unintentionally marginalizing others,’ Jenkins said.” In other words: We have become full of claptrap here.

And in order to keep the mob at bay before they really get mad at us, we’re gonna eliminate whatever it is that might upset them. Even though we do not know who they are! We have no idea who this mob is, we don’t know where they live, we don’t know how honest they are. But, boy, can they ruin things! So we’re gonna take preemptive action to make sure that anything that might offend any one of them is covered up.

“In 2017, more than 300 students, employees and Notre Dame alumni signed a letter in the campus newspaper that called for the removal of the murals. The president of the Native American Student Association praised Jenkins’ decision.” So you see, folks, as we discussed yesterday, virtually every instance of the American founding, of the establishment of Western Civilization in North America — every vestige of it — is under assault, is being accused of being guilty of some kind of damage to somebody, it must come down.

This all-out assault continues unabated, and we don’t have any opposition to it! Instead we have people so upset with Donald Trump as president that they join with these people in advancing their political agenda by not standing with us in trying to stop it. I think… Remember that Gillette ad, “the best a man can get,” ad where they had all these… (sigh) Well, they wanted to change the definition of real man, and they wanted to promote transgenders and this kind of thing and all kinds of left-wing uber-politics and this kind of thing.

I actually think that the Gillette real man award should go to the 17-year-old kid who stood up in the face of that bullying by the black nut-job Israelites, whatever their name is, and the Indians and Nathan Phillips over there banging on the war drum. That kid deserves the Gillette real man award. But I don’t think Gillette knows what a real man is anymore, as evidenced by their latest ad. Here we had grown men bullying teenagers triggered by a cap that said “Make America Great Again” on it. (chuckling) 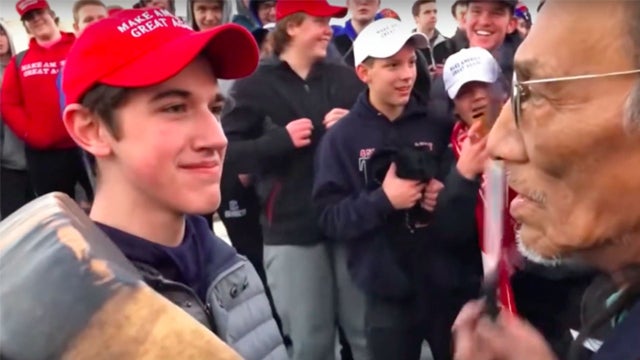 That cap triggered a bunch of Never Trumpers!

They saw a smiling 17-year-old kid wearing a Trump hat and just lost it. Just lost it!

The idea that making America great again is controversial should tell you everything you need to know.