The Latest on the Shutdown and State of the Union

RUSH: The Senate has said votes on two bills that could end the shutdown. They are both expected to fail because they’re gonna need seven Democrats. These are basically bills that will provide $5.7 billion for the wall, but to continue the current status and treatment for, what is it, 400,000 DACA people and some TPS people, Democrats are saying no way, no how. Trump has sent a letter to Pelosi saying, “Hey, I’ll see you next Tuesday for the State of the Union.” 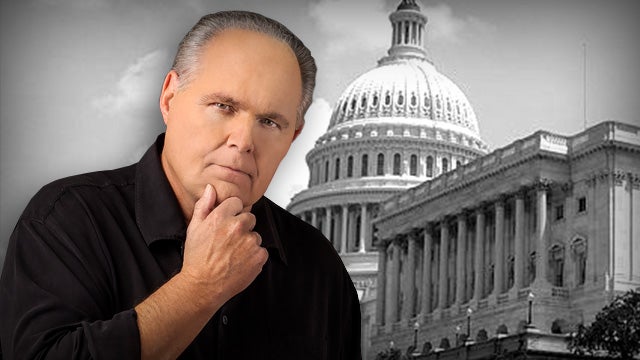 Despite the fact that she’s disinvited him, he has sent her a letter saying he’s showing up anyway. CNN is asking, (paraphrasing) “Why in the world does Trump even want to do a State of the Union show? Why? I mean, it’s not gonna sway public opinion. Nobody watches these anyway.” Little Brian Stelter is saying…We’ll have the sound bite. (paraphrasing) “Why does Trump want to do this?

Nobody watches these anyway. And if he does a rally like we’re hearing, the only people that cover that will be Fox News.” So basically CNN’s saying Trump has nowhere to go here because we’re gonna freeze him out. We shall see.

RUSH: The president has sent this letter to Nancy Pelosi (paraphrased), “Hey! I’m looking forward to the State of the Union address next Tuesday. I’ll see you in the House chamber at whatever time.” The media is saying that this constitutes a flagrant disrespect of the speaker of the House who has disinvited the president. The president can’t just show up wherever he wants on Capitol Hill. He’s gotta be invited up there by the people that run Capitol Hill.

He can’t just show up. So he’s showing great disrespect for Pelosi and the House in general. I mentioned at the top of the program that there’s beginning to be some cracks here in the Democrat resolve. By the way, a lot of people want to know, “What is the status? Where do things stand now?” Here’s the deal that Trump proposed. I’m gonna give you the basic elements of this.

It has $5.7 billion for wall funding, border security, in exchange for the continuation of DACA status for 300,000 and the temporary permanent status for another 200,000 or 300,000, but no pathway to citizenship. No amnesty! No pathway to citizenship! It gives the Democrats a lot of what they want. But it has the $5.7 billion for the wall, which, the Democrats don’t want Trump to have any kind of a deal here that constitutes a win, that could be portrayed as a win.

I am told that there is a lot of pressure inside the White House on Trump to including a pathway to citizenship for the DACA kids and the TPS people. But I think that would be an egregious error. It’s not time for that. It isn’t necessary to get this. This is about border security. No amnesty, no pathway to citizenship. None of this. But there’s pressure inside the White House for Trump to do this. Look, folks, we all know. We’ve talked about it. There are people in there who, A, are trying to sabotage Trump, who think that he’s a neophyte, doesn’t know what he’s doing.

And they’re trying to massage what he does in their image of what should be done. And then he’s got other advisers who, in this case, do think a pathway to citizenship might get a deal. And it might, but that would be self-defeating. I personally think the president has to hold fast on no pathway to citizenship. Just stick with the deal you offered. Stick with it. It’s been presented to the Senate. It needs seven Democrats voting for it. That’s not gonna happen. I don’t think… Nobody expected this to pass. You got 53 Republicans; you need 60 votes in the Senate. They’re not gonna get seven Democrats, at least at this stage.

The purpose of offering this deal is to demonstrate that one side is willing to compromise, negotiate, cross the aisle, make sure government works, demonstrate cooperation — and whatever all the cliches are that the American people supposedly all want to see. This is another myth, by the way, that the American people at large — the vast majority of them — want the Congress and the president to get along. That assumption is belied by presidential results! The people that voted for Donald Trump do not want Trump getting along with the Democrats if it means the Democrats get what they want!

So many cliches. (impression) “The American people want Washington to work. They want to see cooperation. They want to see Republicans crossing the aisle.” It’s all a crock. But to the extent that there is a benefit in showing they’re willing to talk, right now Trump is winning that. It is Pelosi refusing to even enter a room with Trump. It’s Pelosi refusing to even talk about this. She’s pandering expressly to her base. This is causing a weakening in the resolve on the left. TheHill.com has a story.

“Rep. Collin Peterson (D-Minnesota) called on his Democratic colleagues to give President Trump the funding for his long-desired border wall … saying its construction is inevitable.” We’re gonna get this thing anyway. “‘Give Trump the money,’ Peterson [said] on Tuesday. ‘I’d give him the whole thing … and put strings on it so you make sure he puts the wall where it needs to be. Why are we fighting over this?'” says this Democrat. “‘We’re going to build that wall anyway, at some time.'”

So he’s tantamount acknowledging the need for the wall, and he’s not a newbie. He’s a 15-term congressman. Thirty years this guy’s been there. “The 15-term congressman said top Democrats look at him ‘cross-eyed’ when he makes this suggestion.” I guess looking at him cross-eyed is their best argument? That’s all they’ve got? I think we’ve got the sound bite. Let me… Yeah, Collin Peterson. Yeah. Grab sound bite No. 10. This is on KFGO. It’s in Fargo, and the interviewee is Representative Collin Peterson, and the host says, “If you were in that room talking about the government shutdown, what would you do?”

PETERSON: I’m a committee chairman. So I’m in the room with other leadership.

PETERSON: And I told them, “You guys are making a mistake. Give Trump the money.” I’d give him the whole thing. Put strings on it so that you make sure that he puts the wall where it needs to be. Why are we fighting over this? We’re gonna build that wall anyway at some time.

RUSH: Wow. That’s a 15-term, 30-year Democrat congressman, Collin Peterson, saying give him the wall, give him the money. We’re gonna build the wall anyway. Meaning, this guy, he’s betraying… Wrong word. He is portraying what the actual thinking on the Democrat side is anyway, because you know what he knows? He knows that Schumer and Pelosi and Hillary Clinton and all these other Democrat leaders have — in the past — proposed a wall. They’ve all supported building a wall, including spending as much as $56 billion for one.

He’s also telegraphing that the Democrat position on this is at some point there has to be something done about the-never-ending flow of illegal immigration. Now, I’m gonna tell you something, folks. If there are Democrats who think that, it must mean it is really out of control, because the Democrats need a permanent underclass. They have been in favor of amnesty for all the illegals they can round up. They have been for open borders. They have been for anybody getting into this country who wants to get in because they’re future Democrat voters.

If there are now Democrats willing to go along with putting some limits on it and even building a wall, it tells me that there’s a bunch of ’em — and I don’t know how many, but some of them, at least — who are beginning to think that this whole thing is out of control. Meaning the degree, the number, the amount of illegals. Let’s see. Here is Steny “Hoyer Breaks with Pelosi, Says He’d Be Open to Trump Giving [State of the Union] on House Floor,” and also disagreeing with her on walls, that “Walls Can Be ‘Moral.'”

So there’s some fissures, if you will. Meanwhile, during all this Trump’s approval rating is holding steady at 45%, amid the government shutdown. Again, this is in TheHill.com. So they’re telling us — and CNN’s running all these polls, “71% of the American people blame Trump, 71% of the American people want the government shutdown ended, 71%…!” Well, how is Trump’s approval number at 45% in the shutdown then if all those CNN numbers are true?

RUSH: Last week the Trump administration ordered tens of thousands of IRS workers to go back to work. Many IRS staffers belong to a union, the National Treasury Employees Union. That group put word out this week that tax refunds may be delayed due to the current shut down. They said some IRS employees are taking advantage of a provision that allow them to skip work if they suffer hardship. Do you know that this was not reported. I’ve got the tweet here, some of the — the Republicans actually offered legislation last week to pay certain federal employees even during the shutdown? 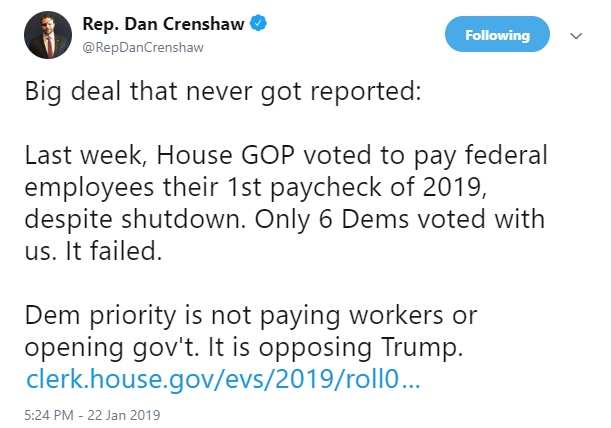 It was representative Dan Crenshaw. Big deal that never got reported. Last week, House Republicans voted to pay federal employees their first paycheck of 2019 despite the shutdown. Only six Democrats voted with us. It failed. Democrat priority is not paying workers or opening government. It’s opposing Trump. Did you know this? It was not reported. We wouldn’t know about it if congressman Crenshaw had not told us.

All we got was the sob story that said now soup kitchen, soup line, soup kitchen stories, federal employees, they out of clothes, they’re out of shoes, their shoes have holes in them, don’t have any gloves, such horrible, it’s all because the. Well, the Republicans offered to pay them, yet the Democrats, only six voted with them. You didn’t hear about that.

RUSH: Nancy Pelosi has responded to Trump’s letter saying, “Hey, I’ll see you next Tuesday for State of the Union.” She says, “No, you won’t. The House chamber is not authorized. You can’t come while the government is shut down.” Children everywhere. We’re surrounded by em’ disguised as adults.