RUSH: Now, let me see if I can dig deeper on this whole abortion business, and maybe I’m going too deep on it. Maybe I’m making too big a deal out of it. We’re talking murder here, folks. Now, that’s what makes this different from the way they’ve always approached this. There has been is a significant, fundamental change in the way they are describing what they are supporting here, because it’s always been killing. They’ve known it, we know it, everybody knows it. They have sought to massage the language so that it wasn’t seen as that.

It was “an unviable tissue mass.” Pregnancy is “a risky medical condition.” It can develop into a “disease.” Then they told us that there are deep psychological problems that can result from pregnancy itself. Not abortion, but pregnancy! I mean, they built a whole lot of so-called justifications for abortion, never acknowledging that the death of a human being was happening. That was the point! It was not the death of a human being. They argued about when conception began. They said it wasn’t a human being.

And people would say, “Well, it has to begin at conception! Life begins at conception because where else can it begin?” “No, you can’t say that.” And then they got into scientific — presented scientific information from learned people at the Guttmacher Institute about when life begins, and it was never at conception. Then they got into arguments, ” There’s no soul there. What are you conservatives talking about? There’s no soul until the baby’s born!” They went through every imaginable distortion and contortion to guilt or innocence everybody that they wanted to support the cause here, that we were not talking about the loss of life.

If they came out and advocated for the wanton killing of children, they would have never had the popular support for it that they did. But if they couch it as, “So many women are impregnated against their will by rapists, muggers! Men are brutes! Can’t trust men with their own children! Anybody… Who would want to bring a child into the world fathered by that brute?” Then they somehow you Pajama Boy walking in the garden.

Seriously, folks, they did everything they could to justify the procedure by dehumanizing it. Do not doubt me on this — and why? Why? What was in it? Why were they even so into this? It was a political issue. What was the benefit of this? Well, it was a hell of a fundraising issue, but it also tied inexorably to militant feminism, which meant that it tied to uber-liberalism. So it was designed to raise money. It was designed to create hatred against people who love God and believe in God.

It was designed to create a divided society and culture with people that love and believe in God on one side and everybody else on the other, and then they tried to recruit as many people away from God to their side as they could. All the while, never acknowledging… That’s why they couldn’t support adoption. They couldn’t support adoption because there’s no baby. Then, of course, rape and incest comes along, and that’s even another reason why! But it’s not the baby’s fault how it was conceived, but it didn’t matter.

Rape and incest, another reason why we can’t force women to… But now, folks, all that’s gone now, and it’s changed — and you know, the big change is, they are giving standing ovations in the New York state Senate chamber to the killing of children! Now they are acknowledging that that’s what’s happening, and they’re applauding it! And they’re codifying it and making it constitutional in New York. They applaud it. There was a standing O for the provision that if an attempted abortion fails, you can go ahead and finish the job after birth. (clapping)

They stood up, standing O. Do you realize this is a striking change in approach? For the longest time there wasn’t a baby involved, there wasn’t a human being. It was just a woman’s right to choose. It was just civil rights, human rights. It was an illness. It was an unviable tissue mass. It was a potential psychological problem. To get away with it, to promote it, to make sure that there were as many abortions as possible, they had to take the human element out of it — and they did. 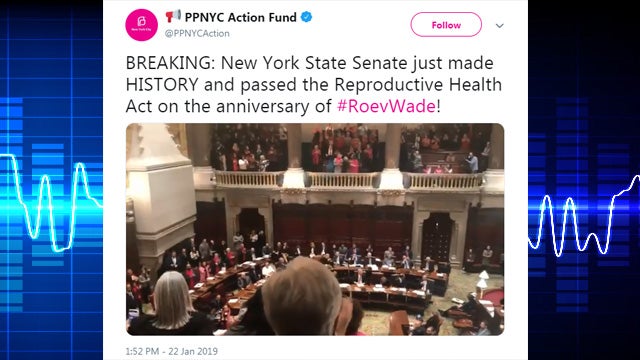 Now they’re making no effort whatsoever to hide what’s happening. They are opening celebrating what’s happening. That’s my question. Why? What in the world, folks? The last time something like this happened was in World War II! You’re not supposed to bring that up, by the way, in relation to abortion. I found that out when I tried that at the 92nd Street Y with Jeff Greenfield. Man, did they get mad at me in the audience that night! I said, “I don’t understand, you people,” ’cause, see, there wasn’t killing going on back when I did it in 1992.

There wasn’t killing. Talking about that way? Oh, no. You reminded people what’s going on. You couldn’t do that. Now they’re right out in the open. So abortion now is an approved method of killing, whereas it used to just be about “a woman’s right to choose,” a civil rights issue. Somebody want to tell me that they’re going in the right direction? Somebody want to try to tell me that they are “progressives” and that they are furthering the enlightenment of human existence? What kind of people are these? Now, I asked earlier, “Why are they doing this?”

I’m gonna give you my answer to it, and it’s not a standalone. It’s not just one thing. But I’m gonna tell you what a large part of this is. Many of you are gonna pooh-pooh it. Many of you are going to say, “Ah, Rush, get serious. It’s not that simple and insignificant.” But I’m gonna tell you that a significant part of that standing ovation at the New York Senate chamber and a significant part of all the other celebrations is about one thing, and that is they are beating us and rubbing our nose in it, and that is what makes them happy. They hate us to the point that anything that gives them the feeling of victory, the feeling of having trounced us, that’s worth the standing ovation.

“Us” being religion, God, the Catholic Church, Christianity at large, conservatives, the conservative movement.

That’s as much of what they’re celebrating as anything. They think we’ve been standing in their way on this and so many things, and they’ve had two years of what they think is Trump standing in their way — and to them, this deal in the New York State Senate yesterday was a massive rebound, a massive overcoming of tremendous odds, and they finally won one, and they get to rub our nose in it. And that, as much as anything else, is what motivates these people. I’m not saying that that takes away from how evil it is. Don’t misunderstand. They care about the issue too. But their hatred for us and victory over us is as much of the motivator as their issues themselves.