What You Can’t Say About Hijabs and MAGA Hats

RUSH: Congresswoman Ilhan Omar, what would happen to me if I said that a hijab triggers me and scares me? I couldn’t say that? Well, why not? I mean, if a “Make America Great Again” hat scares, why can’t a hijab? I guess I can’t.

RUSH: “Facing a lawsuit after she spread defamatory falsehoods on Twitter,” imagine that: Somebody lying on Twitter, “Rep. Ilhan Omar on Wednesday deleted a tweet without explanation or apology. In her tweet,” the revered and respected “Omar had actually defended the racist, homophobic Black Hebrew Israelites who taunted the Covington Catholic High School students” last weekend. “Omar was wrong about virtually all of that except the bit about the PR firm. 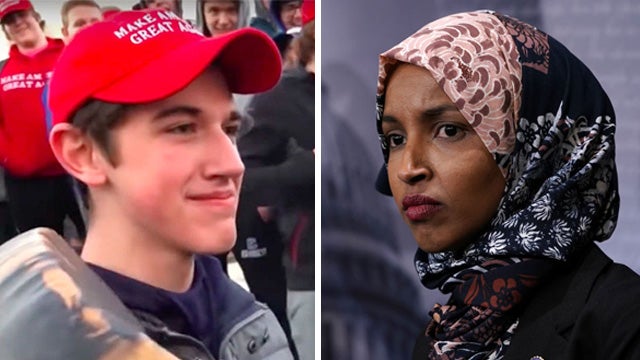 “Nicholas Sandmann’s family did hire a PR firm to help them get their message out to a largely hostile media,” and they got ripped to shreds by the Drive-Bys-for-hiring a PR firm. You know why? The only people that hire PR firms are guilty! The only people that hire PR firms wish to spin the truth. Which, of course, is BS. PR firms are part and parcel of lobbying. I don’t even need to go there. “The Covington kids had just participated in the March for Life, not a ‘protest of a woman’s right to choose.’

“While a short video taken of a group of teens shows a confrontation with protesters where a boy makes a joke about rape, the kid reportedly doesn’t even attend Covington Catholic High School. The Covington boys were not taunting the black separatists. They were trying to drown out the black separatists’ racist taunts with school cheers.” It was the Congressional Black Hebrew Israelites that were instigating everything here, and then when Nathan Phillips — the frail, brave, and courageous, lying Vietnam War vet Indian leader.

When he saw that there was a crowd that had gathered, and he saw some white kids, he said (paraphrased), “Well, let’s go join the protest against these little heathens,” and he shows up and starts banging on the drum. The kids thought that he might have been coming over as an ally. They really did think that. But that’s before they knew who Nathan Phillips is. Nathan Phillips a classic liberal. If there’s a protest, go make it worse! If there’s a protest, if there’s anybody in a protest that’s conservative and it’s a pro-life bunch of kids, then go out there and start taunting them.

That’s what Nathan Phillips’ instinct is. He’s a leftist! He’s a leftist first, then he’s an Indian activist second, lies about Vietnam third, but he’s a leftist activist. He’s a community organizer, like an Obama type. He’s constantly seeking out trouble and hoping to amplify it and turn public opinion against whoever in the protests are his political enemies. The Covington kids did not surround Nathan Phillips. He walked into them. He was loudly beating a drum, and he was doing war chants. They did not respond with racist chants or all these things that Ilhan Omar said.

Ilhan Omar said that these boys were “protest[ing] a woman’s right to choose.” They were making jokes about rape, doing all these horrible things — and then they attacked Nathan Phillips, surrounded Nathan Phillips, started doing racist chants. This is what she lies about! She lies, puts this all on Twitter! She went on to misrepresent everything — and this woman is a celebrated freshman. The Democrats think she’s great — and she couldn’t tell the truth if her life depended on it! None of them can! They’ve all been corrupted by whatever their political agenda is! 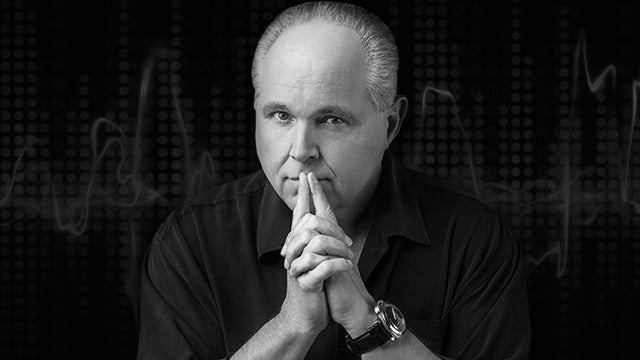 And everything in life… If they see a worm snaking in front of ’em they’re gonna find a way to politicize it! So the Covington kids hired a lawyer out there named Robert Barnes. Robert Barnes is representing the families of the Covington Catholic boys, and he “warned Omar about being held legally culpable for the false claims in her tweet, [and] she quickly deleted it. … Omar later tried to shame conservatives who were sharing screenshots of her” lies, and she deleted that one, too! She tries to delete the evidence that she had lied about them, then she chastises people who had screenshots of her lies, and then she deletes that.

So the lawyer here, Robert Barnes, is doing this pro bono — which means U2 is paying for it, for those of you in Rio Linda. “Barnes has given journalists, news outlets, and celebrities until Friday to either retract and apologize for posting [their lies] about the Covington Catholic boys or face legal action.” So quite naturally the lawyer “received a bomb threat on Wednesday afternoon, hours after he gave the media a 48-hour notice to correct the record.”

There were bomb threats being, quote-unquote, “phoned in.” They were all from Twitter, and as law enforcement tracked down Twitterers and the tweeters, of course they couldn’t find anybody because all of the addresses are fake and the IP routing was disguised. These are gutless, anonymous, little wandering shreds of human debris populating Twitter. They don’t matter to anybody. They’ve never mattered. They know their lives don’t matter. This is all they can do to make themselves feel like they have relevance and power.

But because of the nature of the threats — bomb threats and so forth — you have to take ’em seriously. From The Daily Wire: NBC News tweeted back on Tuesday night that “a Covington Catholic High School student was banned from speaking at the school’s graduation because he was gay.” Did you hear about this? (interruption) You didn’t hear about this? NBC, out of the blue… The thing happens over the weekend. The media gets it dead wrong, everybody gets it dead wrong, and then the media begins to apologize, tries to cover their tracks — while still covering the story as though the kids are guilty.

They tried to do both. To their credit (ahem), some of the conservative intellectual Never Trumpers did offer mea culpas. They swallowed hard. They bit the bullet and they swallowed hard. But the primetime networks, while admitting that there was another video that cast the event in an entirely different light, they continued to report on the boys as a bunch of reprobates anyway. Part of that is NBC News sent out a little tweet two nights ago that a Covington Catholic High School student was “banned from speaking at the school’s graduation because he was gay.”

This is not recently. This is something that supposedly happened in the sordid past of the school. But guess what? That claim was false. It was false in several ways. The kid was not prevented speaking because he was gay. He wasn’t permitted to speak at graduation because he submitted the speech too late, and then the school decided that it was too political for a graduation ceremony, and then it was learned that the student — who supposedly was banned from speaking at the graduation ’cause he was gay — didn’t even attend Covington High School! 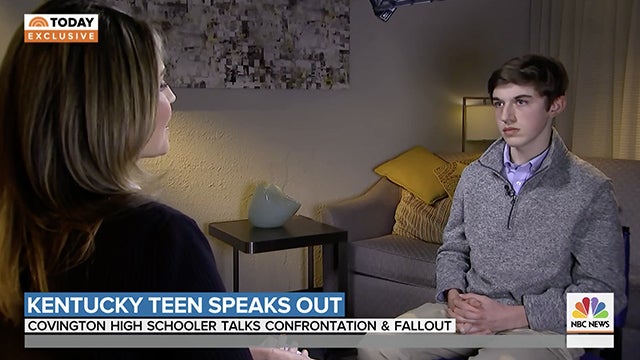 But there’s NBC running with a story (paraphrased), “Yeah, it has to be true! White, rich, suburban, Catholic teenagers equals white racist, sexist, bigot, homophobes. Guilty! So let’s go find news that supports our narrative,” and they found some locoweed to say, “Yeah, they wouldn’t let me speak because I’m gay!” NBC says, “That’s great! That’s great,” and they run with it, ’cause, folks, they don’t care whether it’s true. There’s a new rubric. “If this is true” is now included in the story or the tweet. “If this is true, then” blah, blah, blah…

The student did not even graduate Covington Catholic High. Meanwhile, in other media news, back on Tuesday, Don Lemon — proclaimed by President Trump as the dumbest man on TV in America. Don Lemon decided to attack the Covington Catholic High School chaperones for not teaching the students that “MAGA hats trigger ‘marginalized people.'” On Tuesday night, CNN host Don Lemon “ripped the … chaperones,” the adults at the event over the weekend, for not teaching these little racists that “Make America Great Again baseball caps trigger ‘marginalized people.'”

“Their chaperones should be responsible enough to educate them. After all, they are students.” Let’s say those kids didn’t know that ’cause there’s kids. Their chaperones should be responsible enough to educate ’em. After all, they’re students.” Another CNN host, Fredo Cuomo, “said he did not understand why Covington Catholic allowed their students to wear MAGA hats to D.C. because ‘wearing the MAGA hat would have still been a violation of endorsing a political position.'” Uh, wouldn’t attending the March for Life be seen as “endorsing a political position”?

After you’re showing up in opposition to the March for Life? Wouldn’t that be seen as showing support for and endorsing a political position? Churches are not required to prevent their students from expressing their public political opinions. But, see, that’s another thing that can’t stand. That’s gonna change. We can’t let churches get away with this. We can’t let Catholic Church get away with mining and manufacturing a bunch of little Trump robots out there. 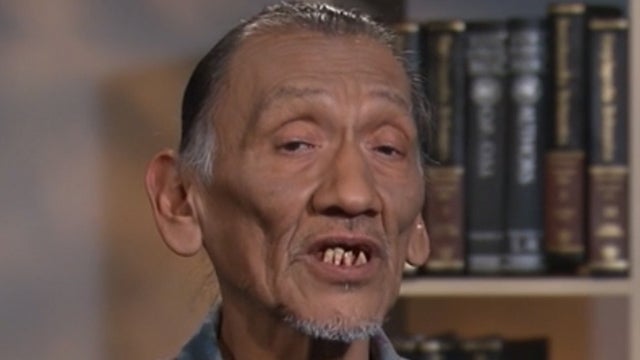 From the Washington Examiner: “Native American Activist Nathan Phillips Has Violent Criminal Record and Escaped from Jail as Teenager.” I don’t mean to keep beating on this guy like a drum. Ahem. But it does turn out… (interruption) Wait a minute. What’s that? Donna Brazile’s back on CNN? I thought they let her go. Didn’t they let her go for feeding Hillary questions? (interruption) Oh, that’s right! I’m sorry. That’s Fox. I was gonna say, I thought CNN let her go. Sorry. That’s right.

Fox has Donna Brazile on looking at the 35 different Democrats who want the Democrat nomination in 2020. Is she gonna analyze all 35 of ’em in this segment? It would be possible. I mean, you’ve got 35 people, eight minutes. It could be done, given the people we’re talking about here. Anyway, in his teens and twenties, when he went by the name of Nathaniel R. Stanard, by the way, S-t-a-n-a-r-d. Now he’s Nathan Phillips, but back then he called himself Nathan Stanard. I don’t know how he pronounced it. He was charged with various crimes, from “escaping from prison, assault, and several alcohol-related crimes…”

As for his numerous claims to the media and in movies of being a “Vietnam veteran” and “a recon Ranger,” it turns out that Nathan Stanard, “Phillips spent most of his time in the Marines as a refrigerator technician… [He] was not deployed outside the U.S. and never saw combat,” and according to records he “was listed as Absent Without Leave (AWOL) three times.” So naturally he’s gonna be of hero status! See, because all these things happened to him because of the oppressive white privileged majority.

If Nathan Phillips did not have the misfortune of living in a white-privileged country, he would have never had to fix refrigerators in the Marines! He would have never been charged with a crime. He would have never had “alcohol-related criminal activity,” and he would never have had to go off to the military because no other evil country would have made him join. He’s now 63. In his own teenaged years and early twenties, he used the “adoptive name Nathaniel R. Stanard,” and it just reviews here what I’ve already told you about him. He was “a refrigerator technician” in the Marines “after initially being an anti-tank missileman for four months,” and never “deployed outside the U.S.”