RUSH: As far as Robert Mueller is concerned, as far as James Comey is concerned and James Clapper, John Brennan, Hillary Clinton, Andrew McCabe… The list goes and on. According to all those people, Donald Trump and Vladimir Putin are best buddies, and they conspired and colluded — worked together — to steal the election from Hillary Clinton in 2016. And they did this because Trump owes Russia everything. If it weren’t for Putin and Russia, Trump would be homeless and would be going to soup kitchens. 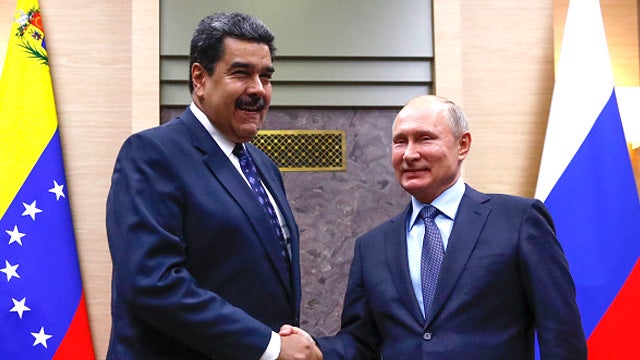 Trump couldn’t get money anywhere. He’d gone bankrupt in the casino business three or four times and it was the Russians that bailed Donald Trump out. It was the Russians and Vladimir Putin therefore who have their hooks in Trump. This is the story! This is what they all believe! This is what they’re desperate that Robert Mueller find evidence of and demonstrate and prove. The idea that Donald Trump and Vladimir Putin are inseparable because Trump owes the Russians everything. Except… Ahem. Except that yesterday Donald Trump announced his administration’s support for the overthrow of Putin’s puppet leader in Venezuela!

Which, by the way, has the largest oil reserves in the Southern Hemisphere. Not a good thing for the Russians or Putin to get their hands on or have control over. So how can it be that Vladimir Putin’s best buddy and the guy who owes the Russians everything — Donald Trump — would so blatantly and publicly end up supporting the overthrow of Putin’s buddy and friend in Venezuela? In the midst of all this, the Mueller investigation rolls out and all of the others in the Drive-By Media and House committees are still searching for the smoking gun that tries to prove that Trump and Putin are inseparable.

Yesterday, President Trump “formally recognized Venezuelan opposition leader Juan Guaido as the legitimate ‘interim president’ of the … country, while U.S. officials urged the regime led by Nicolas Maduro to peacefully give up power.” You might want to point out here to the Never Trumpers out there that Juan Guaido is what real resistance to tyranny looks like.

RUSH: Socialism destroyed Venezuela in what, 12 years? Right around there. You think the left might learn anything from that? Because I’m telling you, folks, if they had free rein that’s exactly the direction that they want to take all the rest of us.