Border Security Is Better in the Bahamas

RUSH: I do want to tell you a short little story. Over the weekend I made tracks to the Bahamas to escape the winter-like temperatures here. It was rainy and 65 degrees and I had to get outta here. I was also invited over there. And, interestingly, even though the Bahamas is really not that far away, 30 minutes, 45 minutes away by jet, because of the water temperatures being so much warmer, cold fronts weaken considerably before reaching the Bahamas, and so it was 10 to 15 degrees warmer over there with negligible rain, particularly on Saturday afternoon and Sunday.

But where I went you fly to a place, and then you have to take a boat ride to your ultimate destination of about 30 minutes. So on the boat ride over, I sat up front with the captain, who is a young native of the Bahamas, and he’s communicating with the harbor people and whoever all he’s talking to via iPhone, looks like a 6 or 6s. So I struck up a conversation. “Oh, you like the iPhone?”

“No, this is the company iPhone. I don’t got a iPhone of my own.” 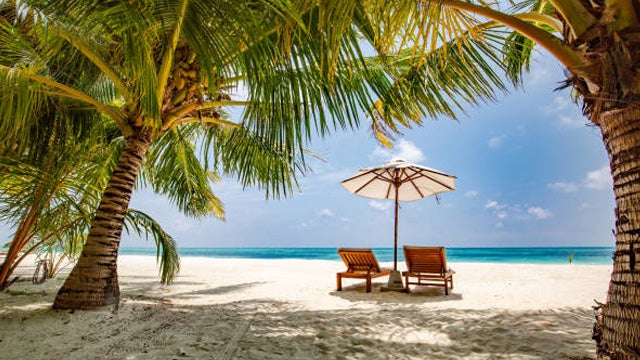 “Oh, what do you use?” And he pulls out this ancient flip phone. (interruption) “What are you saying in there, Dawn? What are you saying?” Yeah, so he pulls out this ancient flip phone and he’s looking at my iPhone XS Max like it’s the biggest Christmas present he’s ever seen. He’s looking at it, he’s eyeing it, he asks if he could hold it, see what it feels like. I said, “Sure, here, want to read the internet?”

I pulled up the Drudge Report, let him read it, pinch it, make it bigger. He’s just marveling at it. I said, “Would you like one? You guys have always been so helpful when I come over.”

I said, “No.” One of his buddies was standing right there next to him, so I couldn’t leave him out. I said, “Yeah, I’ll send you guys each one when I get back on Monday, you’ll have it Tuesday,” meaning yesterday.

“So what’s your address?” Well, that got tricky ’cause he didn’t know. This man had never received a FedEx package in the Bahamas. So he didn’t know what address to use. So I said, “Why don’t you just use the address of the place you work?”

He said, “Okay.” So he called to get the correct address. And he gave me that address and a phone number, and he told the people that he wanted the address to receive a FedEx. That’s what they gave him. I made a note of it, came back, we put together the package — this is Wednesday; right? We put the package together Monday morning, and we sent it out. It has been in Nassau for 48 hours undelivered. You would not believe what they are calling here demanding.

They want proof of purchase by me, they want proof of data, they want serial numbers, they want Social Security numbers. This guy in the Bahamas has to have a personal ID number, a national ID number to receive a FedEx from international delivery. It’s just two iPhones and a fast charger and two cables! And they’re doing everything they can not to deliver these things. Every time they call we have to come up with — it’s kind of like dealing with the New York tax authorities. I have to prove another way of where I was on any given day. These people are demanding more proof of purchase, more proof of this. Even got some confusion over, did I send 512 gigabyte versions or 256 gigabyte.

I said, “What difference does it make?”

“What’s the price matter to the recipient?”

“The recipient pays the tax. Duty. There’s a duty on this, sir.”

So we are no closer to getting these phones to him. We called the guy that I was gonna give the phones to, and it turns out he has this national ID number. He’s just sitting there waiting. But now they’re demanding receipts to prove I bought these things. So I don’t know why any of this matters. I don’t know that this poor guy’s gonna ever get his phones. And now he knows they’re there because we called him to make sure he’s got this national ID number. And I don’t know if we’re gonna get ’em back.

But the point of this is look at how hard the Bahamas is working to keep a couple of iPhones out of their country versus what we’re doing letting illegal human beings into ours! It is the most incredible juxtaposition of things. The iPhone is not agricultural. It’s not a spy device. I can’t imagine what the obstacles are here. But the point is, it is being made so difficult that I’m never gonna try this again. Which is, I think, what they want.

But then you come to the United States and look at the ease with which illegal aliens and drug experts, cartel members, potential terrorists can just walk across the border. It is a striking difference, and it’s kind of mind-boggling in its own way.

RUSH: Here’s Chris in Miami as we head back to the phones. Welcome, sir. Great to have you with us.

CALLER: Yes, sir. Longtime listener. Rush, you called it about the two iPhones having so much trouble getting them in there. I live in south Florida, go to the Bahamas all the time in our boat, and they started charging $300 just to dock your boat up and clear customs when there was never, ever a charge. It depends on how big your boat is how much they charge. God forbid if you break down there and need a part over there what they will charge you and the red tape to get it. And they come here all the time to Miami for nothing and back and forth. And one more comment I had — if you’ll have a second — about these kids. They want free education in the United States all of the time. These crazy left-wing radical kids want free. Well, they can get free education listening to Rush Limbaugh for three hours every day and they’ll learn more than they’ll ever learn.

RUSH: Exactly right. Exactly right. That’s what… In fact, I often say that the Limbaugh Institute is the largest free education institution known to exist in the free or oppressed worlds. You’re exactly right about that. Now, I want to clarify. This often happens. You tell a story and people think something similar has happened. They call and tell you they want to share the details. You know… Here. I’m gonna step in it. I took some iPhones with me as gifts to my host.

You land… I’m not gonna tell you where. I don’t want people tracing the route. This happens. I tell people where I go and there’s a band of people that start following to try it. It’s about privacy, security. But you land in a place, but the ultimate destination requires a boat ride. The boat is owned by the island and the company that did the developments. It’s not my boat. It’s a boat owned in the Bahamas operated by people that do business in the Bahamas. It’s not my personal boat. I’ve never had any problem with Bahamian Customs.

At the airports, they have been awesome. They’ve fabulous, arriving or leaving, and there was no demand to know what I was bringing with me. It was just standard luggage. But in the luggage, I took my hosts a couple of gifts, and it wasn’t a hassle in any way, shape, manner, or form. But when they’re in a FedEx box… I guess it’s the same with UPS, whatever. But when they’re in an international shipment box, the brakes are applied. I don’t have a problem with companies having duty charges on things coming in. That’s not it. It’s that the proof here that all this is on the up-and-up is practically impossible.