RUSH: Go to the audio sound bites, just to show you what we’re up against here. We have lifetime, record-breaking cold because of a polar vortex in the upper Midwest. There is no question we have record-breaking cold. I’m gonna tell you, we’ve had sunspot activity that’s been declining. We’ve been reporting on this for the last the eight years. Democrats, media, leftists do not allow any discussion of the sun whenever there is a discussion on climate change. 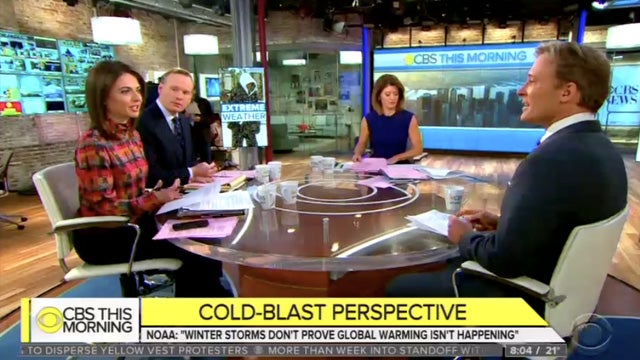 They say the sun is irrelevant to the earth’s climate. Can’t talk about it. But some of this — the lack of warming — is not surprising to people who are truly scientific and study this stuff, but this what the American people hear. I have for you here a sound bite from cohost Bianna Golodryga on CBS This Morning. She’s talking to WCBS eyeball 2 chief weathercaster Lonnie Quinn about Trump’s tweet that talked about the cold temperatures in the Midwest — the tweet that I talked about yesterday that was great. Trump basically asked for global warming to make a fast return because of how cold it is out there.

GOLODRYGA: It’s really frustrating reading a tweet like that from the president of the United States because this really is the definition of global warming and climbing, right? It is freezing here. It is scorching hot in Australia. 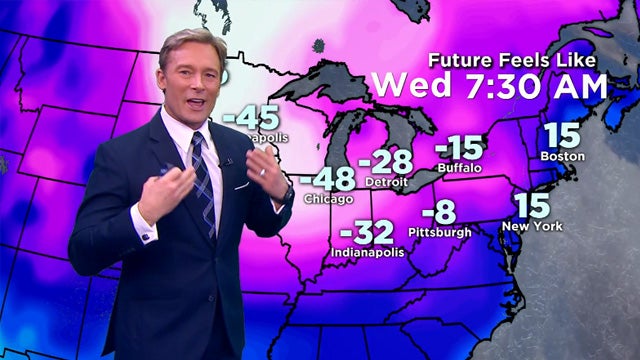 QUINN: Y-y-you betcha. You cannot negate global warming because of this event right now. NASA plotted… Every single year they plotted the average temperatures. Okay? We’ve got that graphic for you right there. And it’s like going from all the data from 1884 to today, is that line going up? Is the earth getting warmer? Or is it going down? Is it getting colder? Really, guys…

RUSH: All right, stop. See, this points up a huge problem. This is Lonnie Quinn. He’s “chief weathercaster” (whatever that is) at WCBS-TV eyeball 2 news in New York, and he doesn’t know that NASA has been called out for cooking the books on temperature data. And you may not either, even though I’ve told you. NASA has been caught red-handed cooking the temperature books and showing warming that didn’t happen since 1884. I doubt that anything Lonnie Quinn reads will have reported that.

I doubt that any TV that Lonnie Quinn watches will ever have report that. But a lot of scientists have pointed out… That email record that we had from East Anglia University in the U.K. where they admitted to doctoring the heat record and hoping that they didn’t get caught? The emails were leaked by somebody at East Anglia who was aghast at what was being done to science. So you just heard her say, “This cold is exactly what global warming is, isn’t it, Lonnie?”

Record-breaking, lifetime cold proves global warming — and this is what brain-dead left-wing Americans are treated to. Doesn’t have to be CBS. Could be CNN. Could be MSNBC. Could any local news organization is gonna report this same gobbledygook. And they don’t even… They’re not even afraid of the charge of hypocrisy. So they take cold weather… Do you know that it is hot this time of year every year in Australia? Every year they have seemingly scorching hot summers, and it’s always in January. That’s summertime in Australia. There’s nothing unusual about it. 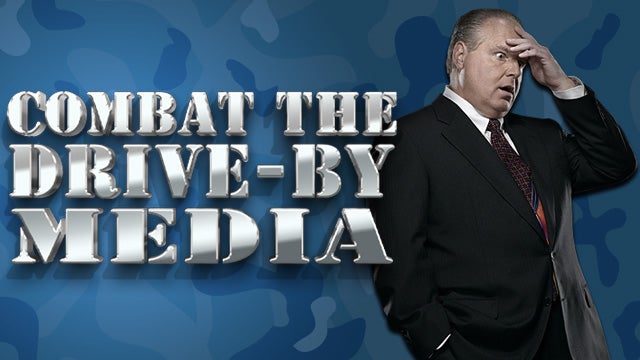 Here is ABC’s Good Morning America, the chief national correspondent Tom Llamas reporting about the cold weather in the Midwest…

LLAMAS: (shouting) This is incredible! We are in the middle of Lake St. Clair. We’re off the coast of Detroit. It looks like Antarctic out here, but it’s actually a lake. This is one of the busiest shipping lanes of the Great Lakes. The ice is so thick, we’re actually able to walk out in the middle of this lake. And this ice… It’s hard to see, but if you look through the ice, about eight to 10 inches thick, just ice everywhere you look. But this is a lake! And take a look how thick some of this ice is. These are like glaciers right here, super thick, nowhere to go. 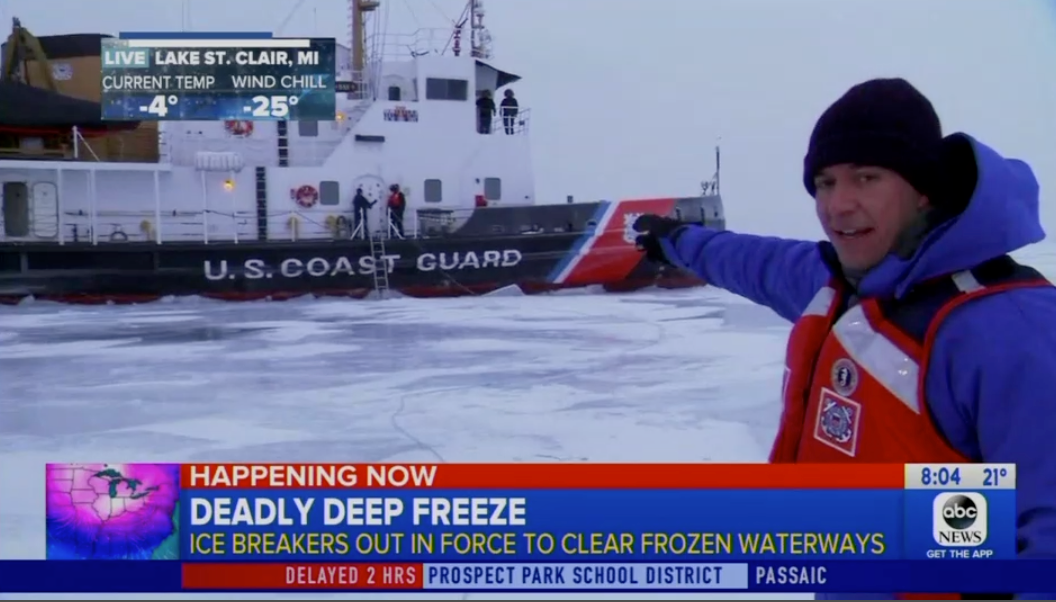 RUSH: This guy sounds totally baffled does he not? ‘Cause I’m sure this guy thinks this is not possible. The global warming did not predict record-breaking cold. They never do. They wait ’til it happens and then they claim it’s because of climate change. They’re doing nothing but projecting and predicting heat as you and I all know. They’re talking about the greenhouse effect and CO2, rising sea levels, melting glaciers.

That’s what they’re talking about. That’s what all these dummkopfs are expecting. Now we’ve got “glaciers” in Detroit, and this guy’s baffled because they tell us the glaciers are melting everywhere, and yet here’s one 10-inches thick in Detroit! He can’t figure it out. Mind-boggling.

RUSH: Andy in Wichita. You’re next. It’s great to have you with us, sir. Hi.

RUSH: Why is it outdated?

CALLER: Well, because I really think that they don’t believe that just about global warming. I mean, it actually encompasses everything in climate change and — 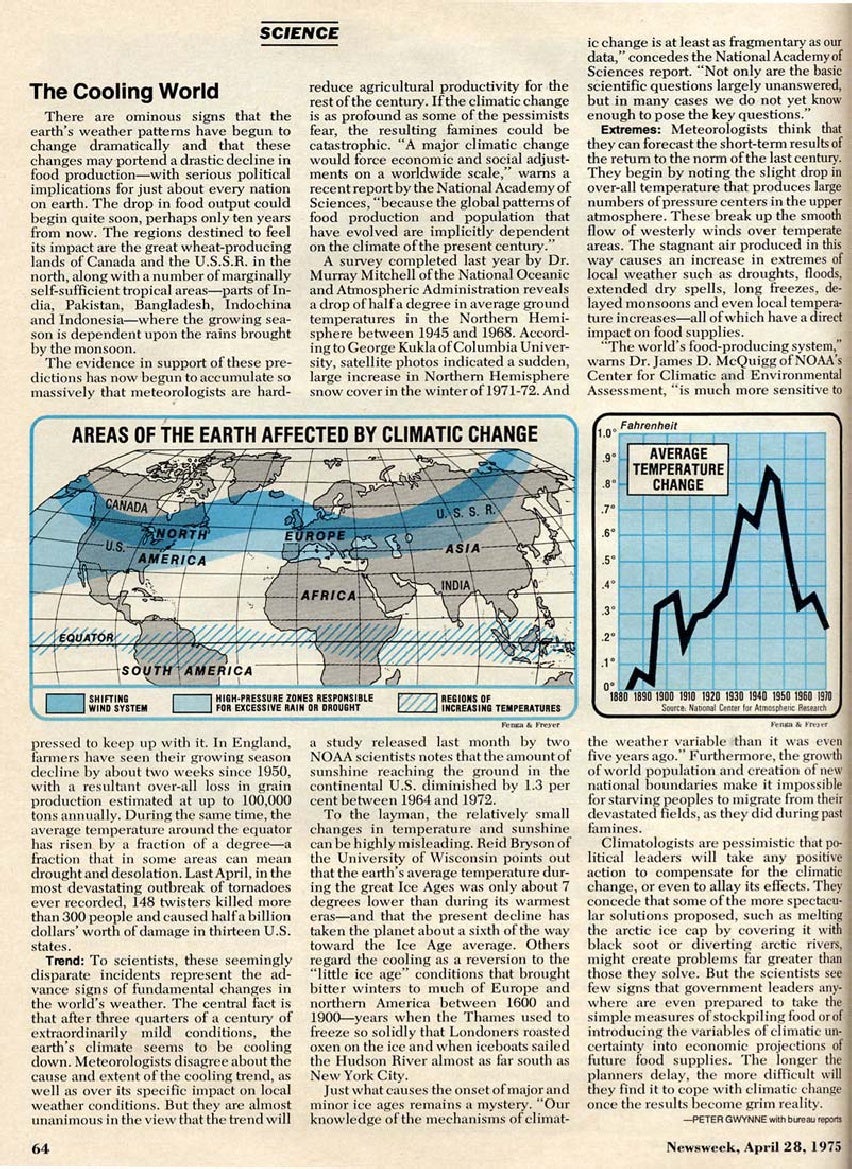 RUSH: No, this is good. This is actually very good. It was global warming! Actually, it originally started, Andy, back in 1975. Well, actually I’m gonna need to go back to my archives. I found a New York Times story in 1910 using the same language about warming, global warming, back then. And the same dangers and the same predictions as are popular today. It has been a political issue practically from the beginning of the petroleum industry, if you must know the truth. But in 1975, Newsweek magazine had a story, “The Coming Ice Age.”

Back in 1975, everybody thought that we were on the verge of having another ice age, and glaciers were going to be moving south and we’re all gonna freeze off our tushes. Didn’t last long. By the time 1984 came around, “global warming” had replaced “climate change” and “global warming” was the term exclusively used all the way up until the early 2000s when warming wasn’t happening. We had a 14-year period where there wasn’t any warming. So then the left changed the term to “climate change.”

It’s about to give away to a new term that the left is using, “extreme weather.” It went from “global warming” to “climate change” to “extreme weather.” They define these terms, Andy. They choose them. They use them. We end up arguing against them and defending against them. They change the terms as the lies of their prognosis are revealed. There is no global warming that man is responsible for. There is no massive climate change that man is responsible for. I had dinner with some people last Saturday night who were fervent believers in it.

One of the guys at the table knew I wasn’t, so this guy decided to start stirring the excrement. “You know, Rush here doesn’t really believe in climate change.” Everybody said, “What! What!” So I said, “Okay. That’s true. I don’t. I think it’s manufactured. Man-made climate change… Let me ask all of you a personal question. If you’re in the administration… Pick your favorite president. Let’s say Hillary Clinton’s president and you’re in the cabinet. She calls you in and she says, ‘We’re running the risk of freezing. We need to warm the climate, and we need to warm it by one or two degrees Celsius in 50 years.’ What would any of you do?” 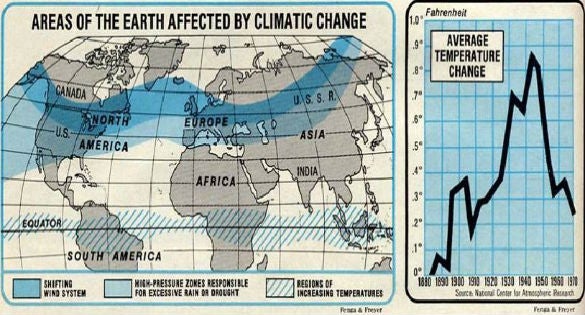 I got no answers.

I got stares, staring at me. I had no takers. So I tried it a different way.

The point being, the people… These were adults. The people that believe it can’t even tell you why it’s happening. They can’t tell you how it’s happening, and they can’t tell you what they would do to stop it, other than what they hear their political heroes say. And then when they… I said, “Do you really think that if you give up your private jet and your SUV that we’re gonna cool the planet?” “Well, no, not just if I do it.”

“Okay, let’s say we stop flying all airplanes. Are we gonna really lower the overall temperature of the planet?” “Well…” They will not say it. Just like gun control. “Okay, you want to get rid of all guns? Join me. Let’s go out to Central Park, let’s find every illegal gun there, and take ’em away — and if you’ll join me doing that, maybe we can talk.” Not one taker. Most of the people that believe this crap can’t even tell you why they believe it nor what’s happening nor what’s causing it. It’s like a religious article of faith and nothing else.

RUSH: I ask ’em, “Have you ever wondered why only successful, growing, capitalist nations with the highest standard of living are blamed for climate change?”

I said, “Do you know this? Do you know that if we shut down the U.S., shut it down, ended all activity and human beings stopped breathing… There’s no United States. We eliminate it. Do you realize the effect on CO2 admissions would be so negligible that we couldn’t measure it?”

“What I mean is we’ve done a bang-up job of cleaning our messes, getting rid of our pollution. If you’re really worried about this CO2 stuff, you need to start talking to the ChiComs! And then you need to go halfway around the world and start talking to the Indians! And then any other Third World nation trying to become Second World and First World with a growing economy and massive pollution. Because if you believe all this stuff is hurting the earth, that’s where you need to go. You could wipe out the U.S. and have a negligible impact on whatever affects CO2 has.” 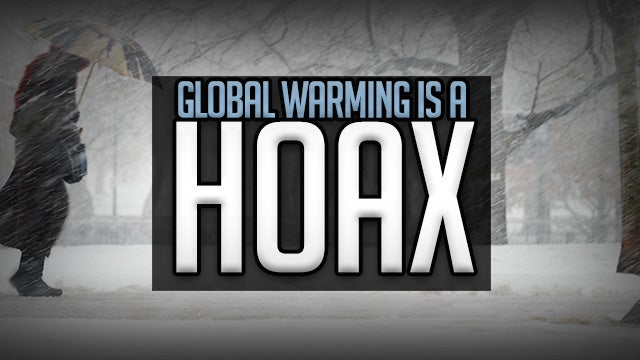 They haven’t thought about this! All these big time donors and all these big time leftist supporters, they haven’t thought about any of this. This is a knee-jerk reaction. And most of it, folks, is aimed at opposing us! Most of what they want to do is simply to defeat us. It doesn’t matter the substance of anything. It’s just the fact that we lose. Such is the hate for us that they harbor. It is as much a factor… Why do they cheer murder in the New York State Senate?

Why did infanticide get a standing ovation? That abortion can now be performed by anybody who wants to try one? A child in a woman designated for abortion survives and then can be killed. Why does that get a standing ovation? Are they really applauding murder? Some of them are so sick, they might be, but I think a lot of is they just hate us and any time they triumph over us or have victory, they just can’t help themselves ’cause that’s what really, really motivates them to do what they do.