But since there isn’t any Russian collusion, since there isn’t any crime that Trump has committed, that they can find and then prove, what they’ve been trying to do is just flood the zone with one anti-Trump story after another, sometimes five a day, all designed to weaken public support for Trump. To cause his base to abandon him. They are totally invested in this. And, as such, when they fail, they are beside themselves.

So CNN just released one of their latest polls today, and it shows Trump’s approval numbers at a level they can’t believe. We have here the fill-in host Poppy Harlow talking to the political director David Chalian just this morning on CNN about Trump’s strength in their poll. 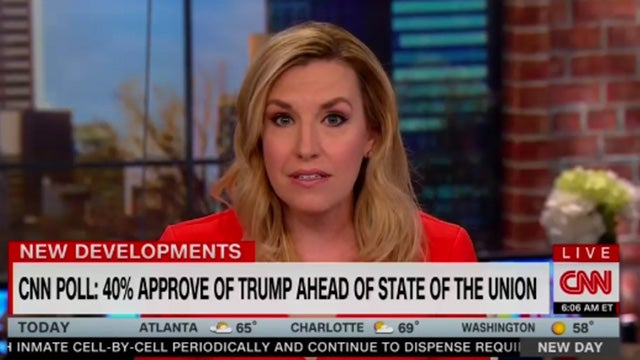 HARLOW: We do have a brand-new CNN poll this morning on how Americans feel about the president. The president’s approval rating stands at 40%. I’m fascinated by this poll. His approval is slightly higher.

CHALIAN: Take a look at how he stacks up to his predator as they were about to give their third State of the Union address. Take a look here. Only Ronald Reagan in 1983 at this point in his presidency was below where Donald Trump is now. Now, that may give Donald Trump hope. You’ll recall Ronald Reagan went on to win a resounding victory for a second term.

RUSH: Beside themselves. They can’t figure this out because they have devoted their existence to this. And I am not exaggerating that. The reason for CNN being in bed with the intel community and the FBI and the DOJ and all these other nefarious sources around the world that want to get rid of Trump has been his public opinion numbers, his approval numbers.

Not only was that the way they got rid of Nixon, they drove his number downs to the twenties, they drove George W. Bush down into the mid- to high thirties. It’s become an objective. The thirties are the line of demarcation. If they can get below that, then they can get rid of the guy. And that’s what they have been singularly devoted to.

It’s clear as day what they’re doing here. Even though there’s no collusion, they’re gonna write a report that tells the story of what it would have been had it happened, and then you go get these pleas from people. You charge people like Manafort and Stone and Flynn just so that you can report on convictions or guilty pleas, which then frees the media to relate the two, even though they won’t be related in the report. So the report gets written that there was possible collusion, and we think we got pretty close ’cause look at the people we convicted or pled guilty to it.

The purpose of this is to continue to create doubt. “The idea that Trump colluded with Russia? We may not have been able to prove it here, but he clearly wanted to and he clearly set the stage for the Russians to have an impact on the election because of his incompetence and his inexperience.” It’s all gonna be designed to, hopefully, cause people who currently support Trump to abandon him. They were hoping for this to happen before the midterms. The reason Mueller hasn’t closed up shop is because there’s now a new election, 2020.

In fact, I have it on good author… Well, I don’t know. Should I tell you? Yeah. I’ve got it on good authority that Mueller’s mostly (sigh), not checked out, but that he’s not the driving force of this things right now, that Weissmann is. But it’s pure politics, folks. This whole report, this whole indictment — all of this — is 100% pure politics under the guise of serious law enforcement. It is exactly what we have always thought it was. It was a hoax and it is a cover-up of the people who actually did collude with Russia and authorize that collusion like Obama and Clapper and Brennan and all that.

It’s insidious. It remains totally… Everybody, everybody involved in this, from Mueller to Weissmann know that there was no collusion. They know it. Their indictment of Stone, contrary to their dreams, proves there’s no collusion. Why would Trump need Stone to go find out what Julian Assange had? If he was colluding with Russia, he would know what Assange had because the Russians supposedly gave it to Assange. Assange denies it, but the report’s gonna say that he did.

The Russians did, and that Trump was colluding and knew. So why would he have to have anybody go find out what Julian Assange had and what was coming? He would have known. Why use Roger Stone? I mean, this is all… The point is, these people don’t care about Manafort. They don’t care about Stone. They don’t care about Flynn. These are just people who will either plead guilty or be convicted of something unrelated, just so the report can secure guilty pleas when matched against the narrative they’re going to tell about collusion that did not happen.