“So he’s gonna hang on, ’cause ain’t no way ain’t no way some Amos ‘n’ Andy thing back in high school is gonna force him out when Donald Trump is sitting there in Oval Office after Stormy Daniels and Access Hollywood. Ol’ Ralph Northam ain’t leaving!” If they want to get Ralph Northam gone, stop all this blackface high school stuff and focus on what he said about killing babies after they’re born. (paraphrased) “Yeah, you make them comfortable, give ’em a pill, whatever you do to make an infant comfortable, and then you zap it.”

That’s what Ralph Northam said. That’s what they covered up. Well, Steve Moore was on CNN brought this up. We have here Erin Burnett, we have Keith Boykin, we have April Ryan. So we got three people against one here, if you count the CNN infobabe, and listen to what happens. This is about a one-minute sound bite. Listen to what happens when Steve Moore brings up what old Ralph Northam from Virginia really, really did…

BURNETT: (crosstalk) This was medical school and he was 25. He was an adult, right, as April pointed out?

MOORE: Let me just make one other quick —

MOORE: — quick point if I may, ’cause I live in Virginia, so I follow Virginia politics. And, you know, he was… This… You want to talk about a politician who has had a bad week? I mean, y-y-you kind of didn’t exactly report what happened this week when… Uh, I think it was quoted as, uh, “relaxed abortion restrictions.” I mean, this was basically a bill that he supported —

BOYKIN: This is not the point, Steve.

BOYKIN: Again, that’s not the point.

MOORE: That has really infuriated people.

BURNETT: That is what came out this week. I don’t want to get into the debate about abortion.

BURNETT: What he said was confusing.

MOORE: But he’s under assault —

MOORE: — for that, too, and I would make the case that was an even offense than — than this picture.

BOYKIN: Steve, we’re going to talk about the issue of racism and, yeah, I know you would like to divert the issue to conversations more comfortable for you about abortion or something. But the reality is —

MOORE: No, I… (crosstalk) It’s just… This is contemptible.

MOORE: I agree with you.

BOYKIN: All right, but this is — this is racist behavior.

They could not they could not let Moore speak uninterrupted about what Ralph Northam’s real offense here is, and his real offense is not that he thinks what he thinks. It’s not that his idea is (impression), “If the mother wants to abort the child even after the child has been born, then that’s fine. That’s fine, we’ll make the infant comfortable, and then we’ll bring in a doctor or nurse or whatever,” because that’s what they believe. Don’t doubt me.

New York State Senate has applauded this very aspect. So they’re trying use this blackface business and the yearbook stuff to make sure it doesn’t get reported what he really let out of the bag — and he didn’t “misspeak,” folks. He gave up the ghost, so to speak, because they’ve also said abortion is a freedom issue, women’s rights issue, woman right to choose, do with her body whatever. It’s not. It’s about killing wantonly whenever somebody wants to, and that’s what they’re trying to make sure nobody hears again.

RUSH: See, in a decent and sane world, ladies and gentlemen, it’s no longer just about a woman’s body when there’s another one. When there’s another body, right? We’re talking post-birth now. (Northam impression) “You can’t tell a woman what to do with her own body here in Virginia. I’m governor Ralph Northam.” Well, what about the baby body there? “Well, the mama she still has control over that baby on whether she wanted it to get born or not.” Okay. You go ahead and make the case. Keep making the case. They’re trying to cover that up, though. Do not doubt me.

The story from CNN: “Embattled Northam Tells Cabinet He Won’t Resign And Be Known As ‘A Racist For Life.’” (Northam impression) “And so that ain’t happening, bro, I ain’t quitting. Nobody gonna tag me as a racist for life. Ain’t happening.” 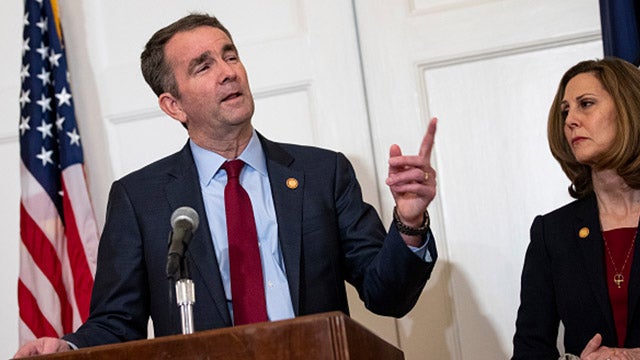 That’s why you’re not quitting? You’re worried about being tagged a racist? Why? You’re not worried about being tagged Kermit Gosnell II. You’re not worried about what you’re doing and advocating when it comes to life and death of human infants, but, man, I can’t have people think of me in that blackface photo the rest of my life. Hey, Robert Byrd managed to do it. He’s a Democrat. He was a grand Kleagle in the Klan! He ended up being heap big praised by the Democrats all the time, Ralph. You’re not gonna be tagged as a racist in your own party. The Democrats aren’t gonna do that. They aren’t gonna sully the whole party by acknowledging there’s this massive George Wallace type version 2019 running around.

Polling data says that Ralph Northam’s approval rating has nose-dived amid racist photo. You don’t think that his polling data may have nosedived because of his stated belief that making the baby comfortable and killing it after birth had some impact on this? “Disgraced Virginia Democrat Governor Ralph Northam approval rating’s taken a nosedive since his unearthed medical school yearbook page was revealed, according to a –” It’s a Morning Consult poll. “Forty-eight percent of Virginia voters were dissatisfied with the way Northam was doing his job. It was up from a previous poll just 26% of Virginia voters disapproved of Northam’s job.”

It says here that Northam’s approval rating is even slipping among Democrats. Only 50% of Democrats in the poll said they approved of Northam after the photo debacle compared with the 70% of Democrats who favored him before the scandal. See, there’s not a thing in here about Ralph Northam’s actual opinion on post-birth abortion. “The Virginia Democrat’s approval ratings among Republicans and independents is even worse. A whopping 73% of Republicans surveyed said they disapprove of Northam’s performance. And 43% of independents said that they were dissatisfied with the way he had been doing his job.”

I have to wonder how many of the people who’ve been polled have even heard about his abortion comments. ‘Cause they’re not mentioned in this poll. I’m telling you, folks, the media and the Drive-Bys are doing everything they can, the Democrats as well, to cover up what Northam actually said. In fact, this yearbook business may be the cover-up. They had to come up with something. 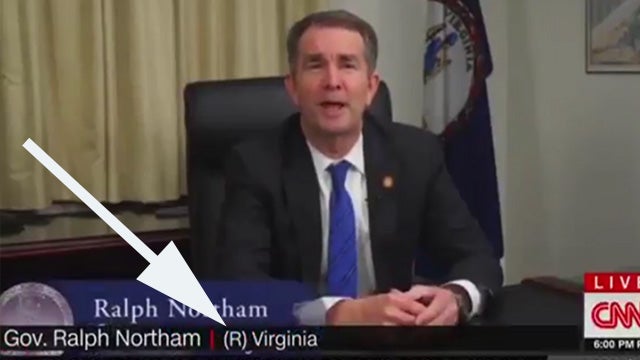 Now, the story we got was that a disgruntled Northam friend or med school friend or doctor associate was so appalled by what Northam said about post-birth abortion that that person leaked all this yearbook stuff. Well, the yearbook stuff is actually serving as a fabulous cover-up for this guy’s comments on abortion. And that’s why he’s sitting there saying if he can just survive this five days… And if he’s telling himself that the Democrats really don’t want him to quit — in other words, everybody’s playing a game here.

The Democrats are saying what they think the American people want to hear. “In our party? We can’t have some guy running around as Michael Jackson moonwalking. We can’t have one of these guys.” That’s everybody saying what they’re supposed to say, but they don’t mean it. Northam thinks they don’t mean it. They just want him to survive this. ‘Cause I’m tell you, I’ve said this a couple times. I’m gonna tell you again.

What’s frosting the Democrats in this, I will guarantee you, is that Trump survived Access Hollywood and all the other similar type things they threw at him. And they’re sitting there saying, “Look, if Trump survives this then this is a new day. We Democrats, we are not gonna quit, we’re not gonna resign, we’re not gonna fall on any sword that Donald Trump didn’t fall on. No way there’s gonna be a double standard.” And that I’m sure is what Ralph Northam is thinking. If he can just hang in there for five or six days.

RUSH: Fred in Cleveland. Welcome, sir. And I’m glad you held on. Hi.

CALLER: Good day, Rush. I would like to get your thoughts on the abortion issue and how for the past 50 or 60 years the Republicans have been afraid of the issue. And my question to you is the sweet irony of what is going on now. And I think in 2020, if abortion is an issue, which it will be, Trump will win handily. The American people will not deal with the killing of live infants. And the Democrats have gone too far and they are blowing the election.

RUSH: Yes, but how many Americans have been told this?

In Virginia, the media is trying not to report that by focusing solely on Ralph Northam’s blackface period with his yearbook photo and so forth. And certainly when it is reported by the Drive-By Media, there’s no accompanying outrage. In fact, it’s reported almost with applause as yet another advance in the ongoing battle against the strict right-wing for a woman’s right to choose.

When the Project Veritas videos came out, the secret videos that recorded Planned Parenthood executives laughing and negotiating the sale price of dead baby body parts, they didn’t pick that up. They immediately embarked on two things: either ignore the Project Veritas videos or run hit pieces on James O’Keefe, the founder and grand pooh-bah. But they did not report the substance. I would venture to say that at least half the country doesn’t know Planned Parenthood does that.

And I’m not trying to depress you. You gotta do keep things in perspective. We have two medias in this country, just like we have two tiers in the justice system. We have a two-tiered climate change operation. We’ve got the people that know it’s a hoax and the people that — well, both sides know it’s a hoax. But one side knows it’s a hoax and is willing to lie to their supporters to convince them it’s not. And the media sides with the people reporting the hoax is real, not exposing the hoax.

And so we just can’t make the assumption that when something big and momentous like this happens, that the American people are gonna find out about it. The Drive-By Media is not going to report on any of this in a way that is harmful or critical to the Democrat Party. They will circle the wagons and try to cover it up or misdirect people’s attention away from it.

RUSH: Janet in Shiloh, Illinois, great to have you with us on the EIB Network. Hi.

CALLER: Hello, Last Man Standing. I needed some help. I need to run a theory past you, if you would be so kind.

CALLER: I believe that the lieutenant governor of Virginia might be being destroyed because he doesn’t support post-birth abortion. We know that he did not support the pipeline, does not support the pipeline that they’re trying to put through in Virginia. And the Democrats were forced to edit him out of campaign literature during the election so that they could carry the state, that they could have the governor and the lieutenant governor and the attorney general. And that’s a pretty extreme measure for even Democrats to do. And I think that we know that the lieutenant governor is a fervent supporter of a woman’s right to choose, and you’re absolutely correct, what the Democrats are doing is all about, in all these state legislatures, is protecting a woman’s right to choose. And what Virginia did was they took it further than anyone ever has. They took it to a woman’s right to choose after birth.