Don’t Be Surprised When Pelosi Takes Out Alexandria Ocasio-Cortez

RUSH: Alexandria Ocasio-Cortez. This is something that we’re gonna have to put up with for a while. I don’t know how long it’s gonna be, but I’ll tell you this. There will be a day where the bottom is gonna fall out on this woman, and it’s gonna be because the media made her. “What do you mean, Rush? She ran for office, and she got elected.” Yeah, yeah. I know. I’m not taking that away from her, but it’s the media that’s made a singular member of Congress into now the face of the Democrat Party.

The media has built this woman up and promoted this woman and created this massive star about whom there’s all this curiosity. She hasn’t done that on her own. And she’s not spouting anything that any other card-carrying socialist hasn’t ever said or proposed. There’s nothing unique about Cortez other than maybe the fly-like eyes and the fact that she was a bartender. They get on Trump for being an outsider, but so is she, but she’s on the right side of the insiders now that she’s in there.

But one day, one day it’s gonna happen. And I wouldn’t be surprised if Pelosi is eventually behind it. One day they’re gonna pull the rug out from under this woman, and she’s not gonna know what happened. Her Twitter followers are gonna abandon her. It would be impossible to say when this is going to happen, but it will.

Anyway, the reason I bring this up is there is a story in The Daily Caller about Alexandria Ocasio-Cortez. How many members of Congress do you think go visit schools every now and then and have periods of time where they talk to the kids, career days, answer questions? It’s a pretty common thing, right? Well, she just did it and it’s made national news.

“Rep. Alexandria Ocasio-Cortez visited a school in New York Monday where she answered a teen’s question about what they could personally do to fight global warming.”

In response, Alexandria Ocasio-Cortez told them not to use disposable razors. She told them to skip, do not eat meat or dairy. She suggested shopping at thrift stores instead of malls and big department stores and big grocery stores. No, thrift stores. Bodegas. She suggested lots of walking, lots of biking, lots of public transit and to carry around a permanent grocery bag and permanent coffee mug. And, if the students would do that, they might be able to save the planet from becoming uninhabitable in the next 12 years. 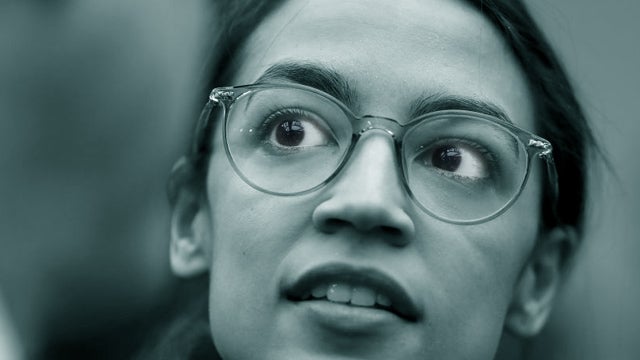 “Christiana Figueres, the former head of the U.N.’s climate program, suggested ‘restaurants in 10-15 years start treating carnivores the same way that smokers are treated. If they want to eat meat, they can do it outside the restaurant.’” And Ocasio-Cortez is endorsing this as well. So that’s what she told ’em. It makes national news. It’s lunacy. It’s gonna mean absolutely nothing. But don’t tell the kids that. You’ll ruin it. “I want save the planet. My parents are destroying the planet! My parents are driving big cars! I wanna save the planet!” Here’s how you do it, kid. And the kids then become loyal soldiers and followers in the church of Ocasio-Cortez.