What Trump Pulled Off at the State of the Union

RUSH: I got an email during the break. “Could you explain what you said about Trump and making America great again?” Let me take another stab at this, because I’ve gone back and thought about it, especially with what the Democrats have done since the State of the Union, how they reacted that night, which we documented and commented on.

I told you I think the structure of the State of the Union speech was genius as in creating a standing ovation for paid family leave and then pivoting immediately to Democrat promoted infanticide and the Democrats not knowing when to applaud and when not to. But just the idea — you know, look at it from Pelosi’s perspective. She’s sitting there, she goes into the room, and she thinks it’s her room, it’s the House chamber, she’s Speaker, it’s hers. The president’s there as an invited guest. 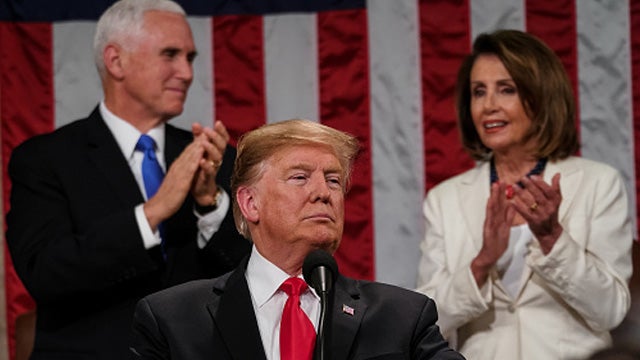 She thinks he’s an idiot and a doofus, an embarrassment and she’s just waiting for him to do some stupid, embarrassing thing, she just knows it’s gonna happen, and he delivers the speech of a lifetime, perhaps one of the greatest State of the Union speeches ever, and she’s behind him, got the camera on her the whole time. And she can’t go nuts, she can’t even show very many facial expressions. She has to attempt, anyway, to be a model of decorum.

And she had to be blowing up sitting behind him watching Democrats — women! — giving Donald Trump a standing ovation on national TV. Democrat women in virginal white standing up and smiling and laughing along with Donald Trump? This was not in the script. This was not supposed to happen. There’s no way under the sun. If anything, she was gonna have to calm her people down and make sure they didn’t boo, make sure they didn’t start marching out in protest, that’s what she was worried about.

The last thing that she ever figured was gonna happen was that people on her side of the room was going to act and be seen on TV as actually approving of and supporting various Trump policies. So that I think when you saw her pick up the script, people joking, it looked like she has a menu from where she was gonna go to dinner afterwards and she was choosing what she wanted from the menu, I think she was looking at text of the speech and trying to figure out, “How much more time do I have to sit here? Is this thing about over? For crying out loud.”

I think she also used it as a tool to bury her face because she had to be the epitome of shell-shocked and frustrated. She got outsmarted, she got outmaneuvered, she got outplayed, the Never Trumpers were beside themselves for the same reason. They’re all expecting Trump to walk in there and make an absolute fool of himself. And he ends up with a bunch of Democrats literally in the palm of his hand.

Trump, on the other hand, defined it for what it is. And that was tremendous. He defined “Make America Great Again” as simply rebuilding America and taking it back from a bunch of people who don’t believe in it, who don’t like it, who don’t trust it and going back to the days of glory and greatness. And he illustrated this with his guests, the World War II heroes, the Holocaust survivor and the World War II hero from Normandy reminding people of American greatness and pointing to people who helped make it happen. And so it wasn’t just Trump’s words. It was actions.

You know one of the most powerful moments of the speech? It’s tough to pick just one. But the Holocaust survivor is describing the average day, which was pure hell, and one day — I’m paraphrasing here — one day things were especially bad, there’s all kinds of ruckus, there’s all kinds of noise, and it looks like that day is gonna be the end and then somebody shouts, “It’s the Americans!” It’s the Americans that had arrived, and that was the ruckus, it was the Americans had arrived and everybody was saved, everybody was rescued.

“It’s the Americans,” they said. And the meaning was clear. Safety had arrived, decency had arrived. “We rescued” had arrived. And it was simply a structure of our country that the left has been hell-bent on destroying both historically and literally for I don’t know how many years. Misstatements about what America is: racist, sexist, bigot, homophobic.