RUSH: This is funny.  A journalist, a female journalist walked into Bloomingdale’s the other day and got triggered and tweeted, “Hey, Bloomingdale’s, this is not funny.  This isn’t fashionable.  It further delegitimizes hardworking journalists who bring real news to their communities.”

It’s a mannequin wearing a T-shirt that says, “Fake news.”  A mannequin in Bloomingdale’s.  And it’s androgynous.  No, it’s a female.  I take it back. It’s a bald female wearing a yellow T-shirt with “Fake news” on it and the journalist is Allison Kaden, and she says, “This isn’t funny, it’s not fashionable, it further delegitimizes hardworking journalists who bring real news to their communities.”  And there’s… Oh, this is good. 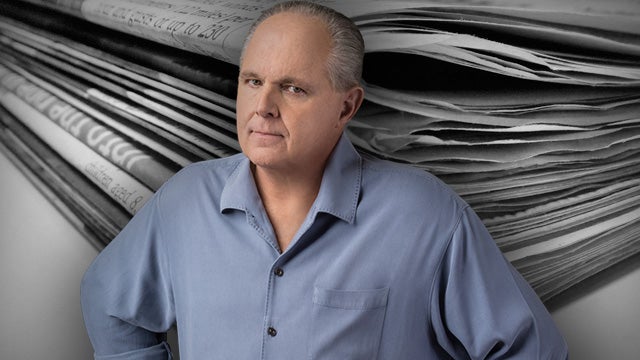 You know this guy Tom Steyer, this left-wing billionaire from California who has been funding and underwriting any organization promising to try hard to impeach Donald Trump? He is getting fed up.  He’s getting frustrated.  He has dumped hundreds of millions of dollars into this.  He’s a hedge fund manager, big liberal activist.  He’s committed to seeing Trump impeached and removed from office.

He wants top Democrats to act now to impeach the president.  If they don’t, he’s gonna spend some of his money to get ’em removed.  “According to Politico, Tom Steyer plans to target a number of Democrat committee” chairmen and women.  “He’s also considering going after the three highest ranking Democrats:” Pelosi, Steny Hoyer, and Jim Clyburn the Congressional Black Caucasians. “In an interview that he gave to…” Let’s see.  Who did he give the interview to?  I hate journalism.  These people can’t write.  “In an interview…” Who cares where he gave it?

A question: Why do so many news stories, so many ideas that the left propose sound like parodies and satire and spoof? “Forbes Contributor Urges ‘Marshall Plan’ to Save Journalism — Journalism, particularly newspaper journalism, is a struggling industry — beset by lost advertisers and layoffs. Trust for media also ‘is at an all-time low,’ according to the Knight Commission on Trust, Media, and Democracy.

“Forbes contributor Michael Posner reacted to the Knight Commission report urging a ‘domestic Marshall Plan for journalism.’ He added that ‘democracy demands it.’ The Knight report argued that philanthropy ‘must play a more significant role’ in the future of journalism.” Basically, what this guy is realizing is that journalism as currently practiced can’t cut it in a free market.

Journalism can’t cut it in a competitive free market.  Journalism can’t figure out how to adapt to the ongoing technological innovation that is occurring throughout this country, and so they want donors. They want the government to come up with money, a Marshall Plan to save journalism. He “called the Knight Foundation’s $50 million American Journalism Project ‘commendable but insufficient.'” That’s no where near enough money.

He said, “What is needed is a domestic Marshall Plan for journalism, in which substantial new resources are invested to save traditional newspapers and journalism. This would need to be a bold major initiative on a scale resembling the plan to rebuild post World War II European economies.”  Do you believe this?  This is a parody, right? No!  The guy is dead serious! Every time I see something like this, I look at myself.  What medium am I on?  Radio.

If these clowns in print journalism cannot make it, it’s because people don’t want to read or see or watch what they’re producing!  Pure and simple.  If you have something people want, if you provide something people like and enjoy, they will go wherever they have to to get it.  These people want to be subsidized because they’re lazy, un-adaptive, and couldn’t care less about their customers.  It’s one of the most amazing things about print journalism that I have noticed.  It’s one of the only businesses where the customer is always wrong and doesn’t know diddly-squat about what he’s talking about when he complains.