Why do they do this? Because it keeps the people with pitchforks away from them. These madcap, deranged leftists are not wanting to take Bill Gates’ money away from him, they’re not wanting to punish him because Gates and Buffett and all the rest of these guys are out there saying, “I don’t deserve it! It’s way too much!” You don’t see them giving it away. Some of them put it in foundations, but when they say they’re not paying enough taxes, you never see them write additional checks to the government, do you? 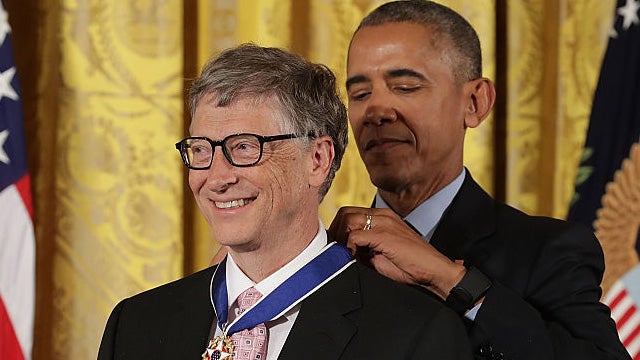 The one rich guy that came out and expressed pride in himself — the one rich guy, the one billionaire that came out and said, “I’m very proud of this. I work very hard. This is the American dream” — Howard Schultz? They’re trying to destroy him. Bill Gates and Buffett say, “I don’t deserve this. I really don’t deserve this. Nobody deserves this much money!” Gates actually said that: “Nobody deserves this much money.”

Now, Gates right now is worth about $96.5 billion, and he “said he and other business barons should have to contribute more,” taxes. Bill, there’s nothing stopping you from writing a check to the Treasury. But notice they don’t do that. They wait around for a wealth tax that they know is never really going to materialize. But they get away with this. They get away with acting like they don’t deserve it and it’s unfair and raise my taxes and so forth.

And the media and the guardians of the left say, “What a great guy! He gets it. He…” Meanwhile, his fortune keeps growing. His fortune keeps expanding. This is an interview with, I think, the U.K. Daily Mail, and he said, “I don’t deserve my fortune. Nobody does. It has come through timing, through luck, and through people I worked with. I certainly worked hard, and I think software has been a beneficial thing, but I benefited from a structure too. I don’t…”

Meaning he didn’t build it. He’s incorporating the Pocahontas line! (summarized) I didn’t build all this. Other people did it. I don’t deserve it. “I don’t think giving the money to my children would be good for them or good for society.” Yet that’s what he’s gonna do. Don’t doubt it. He’s gonna leave his kids with enough money that they’re not gonna have to work. He may not leave them all $96 billion. He might leave them each a billion and tell them to go rough it. But it’s just classic, and I just had to point this out.

RUSH: You know, even Bill Gates, who says that “nobody deserves to be as rich as I am, and I’m not paying enough taxes and I need to be paying more and nobody should be as rich,” even Bill Gates says that tax plans like Ocasio-Cortez’s are extreme and miss the picture. And here’s a guy who wants everybody to believe he’s wide open to paying much more. Oh, yeah, it’s just not right people should be as rich as he is.

He’s been claiming that he’d been paying too little tax, doesn’t deserve to be this rich, nobody does, and yet here comes Ocasio-Cortez and the Green New Deal they’re planning and not even Gates, even for PR purposes, can get behind it.