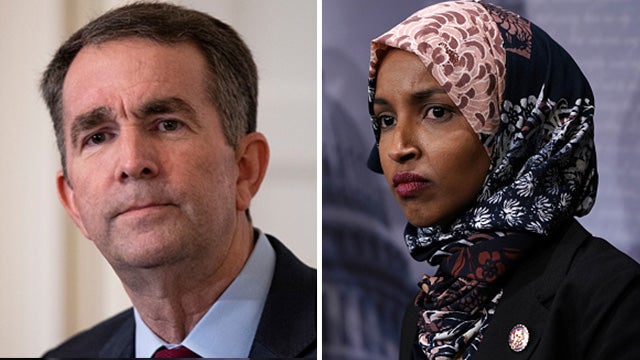 And it’s fascinating to see what it is that has pushed old Ralphie boy off the front pages, and I’ll tell you what the things are that Ralphie boy has been pushed off the front pages by. 1. Anti-Semitism in the Democrat Party. That reared its head here. This is in the story involving a Minnesota member of Congress, Ilhan Omar. This woman is a Somali-born Democrat. There’s a big population of Somali Muslims and leftists, and this woman got elected to Congress, and she has been out there just trashing AIPAC and the Jews.

She is a full-fledged anti-Semite — full-fledged-to-the-max, pedal-to-the-metal Muslim — and she doesn’t know any limits. She just out there tweeting and saying whatever she wants, and the Democrats are getting very embarrassed by this and they’re asking her to tone it down. So she goes out and apologizes, and in her apology she repeats the original allegation about the Jews being bullying and everybody else being bullied by the AIPAC, which, in her world, is the “Jewish lobby,” of course. That pejorative term.

Anyway, that story served the purpose of shoving old Ralphie boy off the front pages. And then here came the Green New Deal, and it did the same thing. Now, what should have swept Ralphie boy off the front pages are endless stories of how the Democrats have pushed a Russian collusion narrative when there wasn’t any. That story ought to be the lead story everywhere you look starting today into last night and into the rest of today.